From Wikipedia
https://en.wikipedia.org/wiki/Marl
For other uses, see Marl (disambiguation).
Not to be confused with Maerl.
Lime-rich mud or mudstone which contains variable amounts of clays and silt 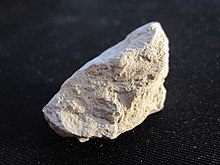 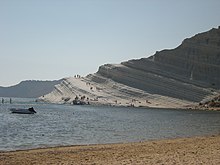 Marl or marlstone is a carbonate-rich mud or mudstone which contains variable amounts of clays and silt. The term was originally loosely applied to a variety of materials, most of which occur as loose, earthy deposits consisting chiefly of an intimate mixture of clay and calcium carbonate, [1] formed under freshwater conditions. These typically contain 35–65% clay and 65–35% carbonate. [2] [3] The term is today often used to describe indurated marine deposits and lacustrine (lake) sediments which more accurately should be named 'marlstone'. [4]

Marlstone is an indurated (resists crumbling or powdering) rock of about the same composition as marl, more correctly called an earthy or impure argillaceous limestone. It has a blocky subconchoidal fracture, and is less fissile than shale. [4] The dominant carbonate mineral in most marls is calcite, but other carbonate minerals such as aragonite or dolomite may be present. [5]

Scheme of the transitional lithotypes from mud (or mudstone) to lime (or limestone), illustrating the definition of marl (marlstone) as a mix of calcium carbonate and clay

The lower stratigraphic units of the chalk cliffs of Dover consist of a sequence of glauconitic marls followed by rhythmically banded limestone and marl layers. The Channel Tunnel follows these marl layers between France and the United Kingdom. [6] Upper Cretaceous cyclic sequences in Germany and marl– opal-rich Tortonian- Messinian strata in the Sorbas basin related to multiple sea drawdown have been correlated with Milankovitch orbital forcing. [7]

Marl as lacustrine sediment is common in post- glacial lake-bed sediments. [8] [9] [10] Chara, a macroalga also known as stonewort, thrives in shallow lakes with high pH and alkalinity, where its stems and fruiting bodies become calcified. After the alga dies, the calcified stems and fruiting bodies break down into fine carbonate particles that mingle with silt and clay to produce marl. [11] Marl ponds of the northeastern United States are often kettle ponds in areas of limestone bedrock that become poor in nutrients ( oligotrophic) due to precipitation of essential phosphate. Normal pond life is unable to survive, and skeletons of freshwater molluscs such as Sphaerium and Planorbis accumulate as part of the bottom marl. [9]

Marl has been used as a soil conditioner and acid soil neutralizing agent. [9] [12] Marl from the Marlbrook Marl is used for the manufacture of cement. [13]

Historical use in agriculture

Marl was in high demand for farms. An example of the amount of marl mined comes from a report from 1880, from Marlboro, Monmouth County, New Jersey, which reported the following tons of marl sold during the year: [15]

Marl continues to be used for agriculture into the 21st century, though less frequently. [18] The rate of application must be adjusted for the reduced content of calcium carbonate versus straight lime, expressed as the calcium carbonate equivalent. Because the carbonate in marl is predominantly calcium carbonate, magnesium deficiency may be seen in crops treated with marl if they are not also supplemented with magnesium. [12]

Marl has been used in Pamlico Sound to provide a suitable artificial substrate for oysters in a reef-like environment. [18]

A marl lake has been defined variously as "[one] whose lake sediments contained > 60 % calcium carbonate as dry weight" or "whose waters average ≥ 100 mg L-1 dissolved calcium carbonate.", while Pentecost proposes a new definition of a lake "whose average surface-sediment calcium carbonate content is > 50 % of the dry weight of the inorganic fraction". [19] [20] They were first noted as a category by Charles Lyell in 1829. [19] Such lakes are seen as of ecological importance, [21] but Pentecost writing in 2009 concludes that "Marl lakes of the British Isles are being adversely affected by water pollution (particularly agricultural, but also urban), drainage, sea level rise and invasive species of plants and animals. It is likely that only the more remote inland lakes of northern Scotland will remain in their present state for the foreseeable future." [19]