The Mandailing is a traditional cultural group in Southeast Asia. They are found mainly in the northern section of the island of Sumatra in Indonesia. They came under the influence of the Kaum Padri who ruled the Minangkabau of Tanah Datar. As a result, the Mandailing were influenced by Muslim culture and converted to Islam. There are also a group of Mandailing in Malaysia, especially in the states of Selangor and Perak. They are closely related to the Angkola.

The etymology of 'Mandailing' is said to be a compounding of the words mande, meaning 'mother', and hilang, meaning 'lost'. Thus, the name is said to mean "lost mother". [2] The Mandailing society is patriarchal, employing family names, or marga. The well known margas in Mandailing clan are: Lubis, Nasution, Siregar, Hasibuan, Harahap, Dalimunthe (originally from Munthe), Matondang, Rangkuti, Parinduri, Pulungan, Rambe, Daulae(y), Pohan, Batubara (not to be confused with the Batu Bara people from the east coast of Sumatra), Barus and Hutajulu. 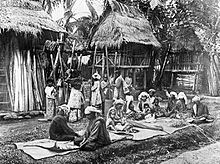 According to Tamboen's account (1952) the Mandailing, along with other sub-ethnic Batak groups are the descendants of one man by the name of Batak; [3] who migrated to the south before the coming of the Portuguese and Dutch colonisation of Sumatra. Moreover, many Mandailing people are Minangkabau descent from Pagaruyung in Minangkabau highlands, such as Nasution clan. [4] Dutch colonization in Sumatra caused the Mandailing to be typecast as a sub-category of the Batak, as a 'wedge policy' to classify the communities and create typologies. It instilled the division of the Islamic nations by a non-Muslim belt, called 'Bataklanden' (Bataklands). [5] The Mandailing were associated with the Toba Batak people instead of being recognized as a distinct ethnic minority. Consequently, the Mandailing people have been torn between two cultural and ethnic identities, namely Batak-Mandailing in Indonesia and Malay-Mandailing in Malaysia. [5]

The Padri War, which took place in West Sumatra and spread to the inland parts of East Sumatra between 1803 and 1845, caused an exodus of large groups of Mandailing from their homeland to peninsular Malaya. Among them were groups led by Raja Asal, the overlord of the Mandailings, and his nephew Raja Bilah. Together with Sutan Puasa, they were embroiled in the Klang War from 1866 to 1873, also known as the Selangor War. [6]

Raja Asal and Raja Bilah fled to Perak, where their followers settled in Lower Perk and the Kinta Valley. The British appointed Raja Bilah penghulu of Blanja while his son Raja Yacob became penghulu of Tronoh, which generated large revenues after the opening of the Tronoh Mines, the largest tin producer in the world in the 1920s. [6]

Mandailing is the name of region Luat Mandailing, which is now almost in Mandailing Natal Regency in North Sumatra. The first group who came to this region were the Lubis and Nasution, later followed by the Siregar, Harahap and so forth. Nasution and Lubis are the biggest groups in Mandailing clan. [7] While other groups, such as Pulungan, Harahap, Matondang, Rangkuti, and others are the smaller groups of Luat Mandailing. Harahap and Siregar dwell almost in Luat Angkola, which now belongs to South Tapanuli Regency, situated between Regency and North Tapanuli Regency. 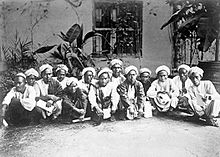 The Mandailing language is still used by the descendants of Mandailing immigrants in Malaysia, although language shift to Malay is observed among the younger generation. [9]

The Mandailing classic of daun ubi tumbuk or mashed tapioca leaves, lush with bunga kantan, lemongrass and coconut milk flavor is a famous food among the Mandailing people. [10]

They have a traditional ensemble of drums called Gordang Sambilan. [11] [12]

The generalization of the term "Batak" being applied to the Mandailing people are not accepted by the those who descended from their customary region, although majority of the population consider themselves as part of Batak ethnic group. [13] The Mandailing people has blood ties, kinship, language, writing script, social systems, arts, customs and norms that are different from the Batak and Malay people. [5]