From Wikipedia
https://en.wikipedia.org/wiki/Malfatti_circles
Three circles in a triangle, tangent to each other and the triangle sides

In geometry, the Malfatti circles are three circles inside a given triangle such that each circle is tangent to the other two and to two sides of the triangle. They are named after Gian Francesco Malfatti, who made early studies of the problem of constructing these circles in the mistaken belief that they would have the largest possible total area of any three disjoint circles within the triangle.

Malfatti's problem has been used to refer both to the problem of constructing the Malfatti circles and to the problem of finding three area-maximizing circles within a triangle. A simple construction of the Malfatti circles was given by Steiner (1826), and many mathematicians have since studied the problem. Malfatti himself supplied a formula for the radii of the three circles, and they may also be used to define two triangle centers, the Ajima–Malfatti points of a triangle.

Does the greedy algorithm always find area-maximizing packings of more than three circles in any triangle?

In an equilateral triangle the area of the Malfatti circles (left) is approximately 1% smaller than the three area-maximizing circles (right).

Gian Francesco Malfatti ( 1803) posed the problem of cutting three cylindrical columns out of a triangular prism of marble, maximizing the total volume of the columns. He assumed that the solution to this problem was given by three tangent circles within the triangular cross-section of the wedge. That is, more abstractly, he conjectured that the three Malfatti circles have the maximum total area of any three disjoint circles within a given triangle. [1] Malfatti's work was popularized for a wider readership in French by Joseph Diaz Gergonne in the first volume of his Annales ( 1811), with further discussion in the second and tenth. However, Gergonne only stated the circle-tangency problem, not the area-maximizing one.

In an isosceles triangle with a sharp apex, Malfatti's circles (top) occupy roughly half of the area of three circles stacked with a greedy algorithm (below).

Malfatti's assumption that the two problems are equivalent is incorrect. Lob and Richmond ( 1930), who went back to the original Italian text, observed that for some triangles a larger area can be achieved by a greedy algorithm that inscribes a single circle of maximal radius within the triangle, inscribes a second circle within one of the three remaining corners of the triangle, the one with the smallest angle, and inscribes a third circle within the largest of the five remaining pieces. The difference in area for an equilateral triangle is small, just over 1%, [2] but as Howard Eves ( 1946) pointed out, for an isosceles triangle with a very sharp apex, the optimal circles (stacked one atop each other above the base of the triangle) have nearly twice the area of the Malfatti circles. [3]

Goldberg ( 1967) provided a convincing numerical demonstration that, for every triangle, the Lob–Richmond procedure produces three circles with larger area than the Malfatti circles, so the Malfatti circles are never optimal. Gabai and Liban ( 1968) followed up with a rigorous mathematical proof of this fact. Zalgaller and Los' ( 1994) classified all of the different ways that a set of maximal circles can be packed within a triangle; using their classification, they proved that the greedy algorithm always finds three area-maximizing circles, and they provided a formula for determining which packing is optimal for a given triangle. Melissen (1997) conjectured more generally that, for any integer n, the greedy algorithm finds the area-maximizing set of n circles within a given triangle; the conjecture is known to be true for n ≤ 3. [4]

The problem of constructing three circles tangent to each other within a triangle was posed by the 18th-century Japanese mathematician Ajima Naonobu prior to the work of Malfatti, and included in an unpublished collection of Ajima's works made a year after Ajima's death by his student Kusaka Makoto. [4] [5] Even earlier, the same problem was considered in a 1384 manuscript by Gilio di Cecco da Montepulciano, now in the Municipal Library of Siena, Italy. [6] Jacob Bernoulli ( 1744) studied a special case of the problem, for a specific isosceles triangle.

Since the work of Malfatti, there has been a significant amount of work on methods for constructing Malfatti's three tangent circles; Richard K. Guy writes that the literature on the problem is "extensive, widely scattered, and not always aware of itself". [7] Notably, Jakob Steiner ( 1826) presented a simple geometric construction based on bitangents; other authors have since claimed that Steiner's presentation lacked a proof, which was later supplied by Andrew Hart ( 1856), but Guy points to the proof scattered within two of Steiner's own papers from that time. Solutions based on algebraic formulations of the problem include those by C. L. Lehmus ( 1819), E. C. Catalan ( 1846), C. Adams ( 1846, 1849), J. Derousseau ( 1895), and Andreas Pampuch ( 1904). The algebraic solutions do not distinguish between internal and external tangencies among the circles and the given triangle; if the problem is generalized to allow tangencies of either kind, then a given triangle will have 32 different solutions and conversely a triple of mutually tangent circles will be a solution for eight different triangles. [7] Bottema (2001) credits the enumeration of these solutions to Pampuch (1904), but Cajori (1893) notes that this count of the number of solutions was already given in a remark by Steiner (1826). The problem and its generalizations were the subject of many other 19th-century mathematical publications, [8] and its history and mathematics have been the subject of ongoing study since then. [9] It has also been a frequent topic in books on geometry. [10]

Gatto (2000) and Mazzotti (1998) recount an episode in 19th-century Neapolitan mathematics related to the Malfatti circles. In 1839, Vincenzo Flauti, a synthetic geometer, posed a challenge involving the solution of three geometry problems, one of which was the construction of Malfatti's circles; his intention in doing so was to show the superiority of synthetic to analytic techniques. Despite a solution being given by Fortunato Padula, a student in a rival school of analytic geometry, Flauti awarded the prize to his own student, Nicola Trudi, whose solutions Flauti had known of when he posed his challenge. More recently, the problem of constructing the Malfatti circles has been used as a test problem for computer algebra systems. [11]

Although much of the early work on the Malfatti circles used analytic geometry, Steiner (1826) provided the following simple synthetic construction.

The three bitangents x, y, and z cross the triangle sides at the point of tangency with the third inscribed circle, and may also be found as the reflections of the angle bisectors across the lines connecting pairs of centers of these incircles. [7]

The radius of each of the three Malfatti circles may be determined as a formula involving the three side lengths a, b, and c of the triangle, the inradius r, the semiperimeter

, and the three distances d, e, and f from the incenter of the triangle to the vertices opposite sides a, b, and c respectively. The formulae for the three radii are: [13] 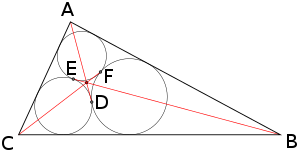