From Wikipedia
https://en.wikipedia.org/wiki/Male_infertility_crisis
Study of infertility in men

The male infertility crisis is an observed increase in male infertility in recent decades. [1] The earliest indications of this decrease first emerged in the 1970s. From this period, there has been a steady decline of 1.4% in sperm counts with an overall decline of 52.4% over approximately 40 years. [2] [3] The crisis is particularly prevalent in the West such as  New Zealand, Australia, Europe and North America, [4] but is also observed in non-Western countries like China. [5]

In its original form, it had begun as a study on male fertility. Evolving into a term used by journalists in the media as a common headline for the reporting for studies concerning sperm, infertility and declining male sexual performance. [6]

Hypotheses for the causes of the crisis is still subject to ongoing further research. Existing research cites lifestyle factors and the presence of hormone-disrupting chemicals, known as endocrine disruptors, in the environment. [4]

The effects and the issues caused are in the progress of development. As the understanding of the effects on individuals, family and society are ongoing subjects for further studies.

This topic has been subject to rigorous debate in regards to the nature and exact degree of crisis that is exhibited in male fertility. However, it has generally been accepted within the scientific community as a key issue of male health. [7] Their aim is to bring the issue to the forefront of media and to public attention.

Usage of the term

The first use of the term male fertility crisis began as early as the 1970s with suggestions it may have emerged earlier in the 1960s. [8] However, its use increased in the 1990s when it became more commonly studied. The term has become a catch-all term as part of the discussion of the health issues of men.

Research analysis has found amongst a sample of British newspapers in the 1990s, there had been a recognisable discourse in the tone of a male fertility crisis. [6] In the 2010s, there had been substantial growth in the frequency of media coverage often coinciding with and in response to releases of studies. Mass media coverage is subject to significant controversy as the use of terms such as "crisis", "apocalypse"  "timebomb" and "threat to human race" have led to arguments that it has given rise to clickbait or hysterical coverage elevating fears within the community. [8] [9]

Various media agencies have published various pieces with headlines that have supported the notion of crisis. Examples include from GQ labelling it "the truth behind the shocking drop in sperm counts," followed by a Newsweek front page cover "Who’s Killing America’s Sperm?" and with the New York Times stating it as "male infertility crisis is coming". [10] [11] [12]

Discussions of the usage of the terminology of male infertility crisis by the media have been evident through various comparisons. For the emphasis of the crisis, one example drew a time-series comparisons between the present-day generations and past generations i.e. fathers and grandfathers or geographic comparisons within countries or to other regions. Further comparisons include drawing similarities to other species, most notably rats and hamsters. [6][ clarification needed] Some have compared the long term effects with the fertility collapse in dystopian fiction works such as Children of Men and The Handmaid’s Tale. [1] [13]

Academia and the scientific community have agreed in consensus in favour of the use of the term. [8] Citing it as necessary to prompt preventative action to remedy the issue in the present time before it affects future generations on a greater scale. While others, such as social commentators, have argued the wide-ranging consequences that follow the male infertility crisis necessitate the use of crisis terminology. [14] Consequences include the subsequent inability to conceive a child. Thus, the effect of involuntary childlessness can be viewed as a crisis. [15]

Beginning in the 1970s and 1980s, the first studies were published that observed declines in the semen quality and later, sperm quantities of men. One of the earliest studies in a paper published in 1974 by Nelson et al. had observed a reduction in sperm quality, with lower concentrations and volumes in particular, and in an increase in the percentage of sperm with abnormalities. [16] Often these earlier studies' methods have been criticised, having been cited for sampling selection bias and the inclusion of men with testicular and fertility issues. [8] There were various reports published in the 1970s and 1980s that had not found similar declines. An example is a research paper by Niecheslag et al. in 1982 which concluded that there were no changes in semen quality. [17] However, the decline in sperm quality did reflect a shift in societal patterns in sexual behaviour, the prevalence of recreational drugs, and preferences for marriages and fatherhood later in life. [18]

In 1980, the World Health Organisation published its first publication, a laboratory manual for semen analysis. This set the standard parameters for the worldwide measurement of sperm quality and normality. [19] Limited research in the 1980s found the first signs behind the decline with links to exposure to environmental toxins and excessive heat in the genital area. [18]

The 1990s saw significant development in the research on male infertility where reliable results proved a decline. A 1992 Danish meta-analysis, commonly referred to as the Carlsen study after the principal author, showed that between 1938 and 1990 a population described as healthy men had experienced a significant decrease in sperm count and seminal fluid volume and thus sperm quality. [11] [20] Following this study, substantial funding was given to further studies which were conducted to support this thesis to attempt to determine the causes of such a decline.

In the late 1990s, the first studies on the social and psychological impact of the crisis are published. [21]

Towards the end of the 1990s, the earliest breakthrough in the development of remedies for the male infertility crisis is found with the use of the technique known as intracytoplasmic sperm injection (ICSI). [22]

By the 2010s it had become clear that there had been a significant and steady decline in sperm count and seminal fluid volume. In a meta-analysis study published in 2017 by Hebrew University, decreases in sperm concentrations of up to 52.4% and a decrease of 59.3% in sperm count from 1973 to 2011 was noted. [23] A further two studies in the year 2018 presented at the Scientific Congress of the American Society for Reproductive Medicine (ASRM) had observed similar findings that sperm counts had reduced and mobility of sperm declined during the 2000s. [8]

A 2012 paper published by French researchers and the Institute for Public Health in the Journal of Human Reproduction studied French males between the periods 1989–2005. They concluded that sperm counts and the proportion of normal motile sperm fell by 32.2% and 8.1%, respectively. [24] [25] 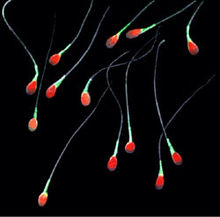 Further research had supported evidence in the role of lifestyle factors and the impact of socioeconomic status. One of the latest studies published in February 2020 in JAMA Network Open had investigated four varying diets using a sample of 2,935 young Danish men. It concluded that men who consumed a "Western diet" composed predominantly of red meat, fried food, and soft drinks had the worst sperm quality compared to the other three popular diets. The "Western" diet had a sperm count ranging between 109 million to 138 million, whereas the "generally healthy" had a count ranging between 146 and 183 million per sample. The "generally healthy" diet was composed of fish, chicken, fruit and vegetables. The co-author of the study stated the importance of diet citing it as "necessary for the production of healthy functioning sperm with high fertility potential". [26] [27]

In 2021, Mt. Sinai Medical School epidemiologist Shanna Swan claimed in her book Count Down: How Our Modern World Is Threatening Sperm Counts, Altering Male and Female Reproductive Development, and Imperiling the Future of the Human Race that "If you look at the curve on sperm count and project it forward — which is always risky — it reaches zero in 2045". [28]

The effects of the crisis are still being understood apart from the well-known correlated issue of directly affecting fertility rates and child birthing rates. The debate remains within the andrology community on the conclusive nature of the evidence to support the claims of crisis. Consequential reasoning for the causes of the crisis is still subject to controversy. Perspectives range on the issue with some viewing it from a biological viewpoint with the focus on causes and medical effects. The research-based in a clinical quantitative lab-based setting has been the traditional biological viewpoint.

Sociologists studying the topic focus on the effect on society and cultures. This domain seeks to be more based on human experiences with a focus on mental and emotional aspects in particular metrics of emotional wellbeing and stress. [29] Sociology studies are part of research seeking to broaden the perspectives on the matter bringing to focus other aspects of the fertility crisis. Traditionally the topic of fertility has been exclusively on women with men sidelined. [21]

Critics of the study of male infertility crisis have cited research that has in part led to the stigmatization of men. The infertility crisis has become conflated with other health-related matters particularly with mental health with the potential of trauma and worthlessness. Spillover effects into society to male vulnerability and perceived threats to male status. Direct evidence that supports claims of stigmatisation caused by men experiencing the fertility crisis is lacking, however. [30]

Various researchers in this area argue not enough research has been conducted and thus, lacks the extensive scientific database relative to other fields of medicine or female fertility. It may be part of the issue to find remedies or lead to remedies that are sub-optimal. [31]

There is a debate on the degree of the effect of the crisis with arguments about the impact of the rate of decline. Sperm has declined (99 million sperm per ml) in 1970 to (47 million sperm per mL) 2011. [32] It remains in a relatively normal range above the 15 million WHO considers below normal. The issue of most concern is the reduction in averages of abnormal sperm counts.

Health practitioners and fertility doctors who work in the field are skeptical of the notion of crisis in male fertility as they had not observed a dramatic decline from the first-hand experience. There is a disconnect between what has been studied in the published research and what is observed in public. [33]

The existing methods to attempt to remedy the issue of fertility that are most commonly used for example Assisted Reproductive Technology (ART) is known to have complications, it is often viewed as expensive and lacking effective access. [34]

There has been much academic research now focusing on attempts to remedy the issue. Proponents argue more needs to be done on causes, in particular, the role of lifestyle factors and a reduction of exposure to environmental chemicals. [35] [7] The thought within the medical community that calls for the breaking down of the stigma that surrounds male fertility requiring a cultural shift to emphasize the importance of the issue as part of the continued decline in health outcomes. [29] [36]

Advocates and proponents of the topic of male infertility have argued for modernization and reform of the health care system through improved practices and increased levels of funding. They argue the role of private health insurance and government to be potential leaders in this area. [37]

Within Australia, the federal government established funding for the Healthy Male, a program intended to support male reproductive health and fertility. Further efforts include an award of a grant in this area of approximately $3million to Andrology Australia. [40]

Organisations in the medical field have been established to address the crisis. Most notably the Male Reproductive Health Initiative is a group focused on male fertility in the attempts to foster and support reform and action to address the issue to enable improvements in outcomes. [7]