From Wikipedia
https://en.wikipedia.org/wiki/Makemake_(deity)
Deity in the Rapa Nui mythology of Easter Island
For other uses, see Makemake (disambiguation). 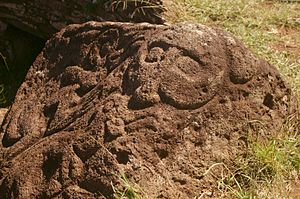 Makemake (also written as Make-make; pronounced [ˈmakeˈmake] in Rapa Nui [1]) in the Rapa Nui mythology of Easter Island, is the creator of humanity, the god of fertility and the chief god of the " Tangata manu" or bird-man sect (this sect succeeded the island's more famous Moai era). He appeared to be the local form, or name, of the old Polynesian god Tane. He had no wife. [2]

Makemake, as a face with large eyes or perhaps a skull with large eye sockets, is a frequent subject of the Rapa Nui petroglyphs. [3]

Métraux states that Easter Island's "greatest religious festival, the only one concerning which circumstantial details survive, was that of the bird-man, intimately linked with the cult of the god Makemake." [4]

Makemake drove the birds to nest on the islet of Motu Nui ('big islet'), the center of the tangata-manu (bird-man) sect. Four gods were associated with it: Makemake, Haua-tuꞌu-take-take ('Chief of the eggs', usually simply called 'Haua'), vîꞌe Hoa (Haua's wife) and vîꞌe Kenatea. [5] Each of the four gods had a supernatural servant, whose "names were given" in the ceremonies. [6]

The ivi atua was the 'seer' who has the vision to select who swam to Motu Nui. A hopu was one of those who make the swim to the islet. Per Englert, the hopu manu were "those who served the tagata manu and, upon finding the first manutara egg, took it to Orongo [on the mainland]." The manu tara, or sooty tern, was the bird that the ceremony centred on; it was the first manu tara egg that was the goal of the ceremony.

Makemake's principle companion was Haua. "The formula which accompanies an offering to Makemake always includes Haua who appears in the myth as the god's companion." [7]

Makemake is featured in the 2000 BBC documentary The Lost Gods of Easter Island hosted by David Attenborough, where he embarks on a personal quest to uncover the history of a strange wooden figurine carving which turned up in an auction room in New York during the 1980s.

The trans-Neptunian dwarf planet Makemake is so named because both the planet and the island are connected to Easter; the planet was discovered shortly after Easter 2005, and the first European contact with Easter Island was on Easter Sunday 1722. [9] [10] The dwarf planet's code name was "Easterbunny". 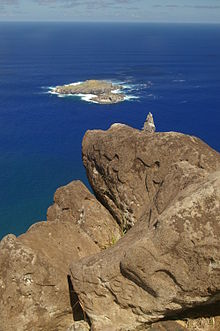 Petroglyphs on rocks at Orongo. Makemake at base and two birdmen higher up