From Wikipedia
https://en.wikipedia.org/wiki/Magenta
Colour
This article is about the color. For other uses, see Magenta (disambiguation).

Magenta ( /məˈdʒɛntə/) is a color that is variously defined as purplish-red, [1] reddish- purple or mauvish- crimson. [2] On color wheels of the RGB (additive) and CMY (subtractive) color models, it is located exactly midway between red and blue. It is one of the four colors of ink used in color printing by an inkjet printer, along with yellow, black, and cyan, to make all other colors. The tone of magenta used in printing is called "printer's magenta". It is also a shade of purple.

Magenta took its name from an aniline dye made and patented in 1859 by the French chemist François-Emmanuel Verguin, who originally called it fuchsine. It was renamed to celebrate the Italian-French victory at the Battle of Magenta fought between the French and Austrians on June 4, 1859, near the Italian town of Magenta in Lombardy. [3] [4] A virtually identical color, called roseine, was created in 1860 by two British chemists: Chambers Nicolson and George Maule.

In optics and color science

Magenta is not part of the visible spectrum of light.

In the RGB color system, used to create all the colors on a television or computer display, magenta is a secondary color, made by combining equal amounts of red and blue light at a high intensity. In this system, magenta is the complementary color of green, and combining green and magenta light on a black screen will create white.

Cone and rod response curves. Note that a purple response is elicited in the brain by stimulating H and L (through its secondary sensitivity) cones but little to no M stimulus.

In the CMYK color model, used in color printing, it is one of the three primary colors, along with cyan and yellow, used to print all the rest of the colors. If magenta, cyan, and yellow are printed on top of each other on a page, they make black. In this model, magenta is the complementary color of green, and these two colors have the highest contrast and the greatest harmony. If combined, green and magenta ink will look dark gray or black. The magenta used in color printing, sometimes called process magenta, is a darker shade than the color used on computer screens.

A purple hue in terms of color theory, magenta is evoked by light having less power in green wavelengths than in blue/violet and red wavelengths ( magenta does not have wavelengths)

In terms of physiology, the color is stimulated in the brain when the eye reports input from short wave blue cone cells along with a sub-sensitivity of the long wave cones which respond secondarily to that same deep blue color, but with little or no input from the middle wave cones. The brain interprets that combination as some hue of magenta or purple, depending on the relative strengths of the cone responses.

In the Munsell color system, magenta is called red–purple.

In optics, fuchsia and magenta are the same color. The web colors fuchsia and magenta are identical and made by mixing the same proportions of blue and red light. In design and printing, there is more variation. The French version of fuchsia in the RGB color model and in printing contains a higher proportion of red than the American version of fuchsia.[ citation needed] 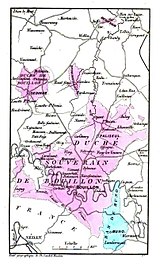 An 1864 map showing the Duchy of Bouillon in magenta

The color magenta was the result of the industrial chemistry revolution of the mid-nineteenth century, which began with the invention by William Perkin of mauveine in 1856, which was the first synthetic aniline dye. The enormous commercial success of the dye and the new color it produced, mauve, inspired other chemists in Europe to develop new colors made from aniline dyes. [3]

In France, François-Emmanuel Verguin, the director of the chemical factory of Louis Rafard near Lyon, tried many different formulae before finally in late 1858 or early 1859, mixing aniline with carbon tetrachloride, producing a reddish-purple dye which he called " fuchsine", after the color of the flower of the fuchsia plant. [6] He quit the Rafard factory and took his color to a firm of paint manufacturers, Francisque and Joseph Renard, who began to manufacture the dye in 1859.

In the same year, two British chemists, Chambers Nicolson and George Maule, working at the laboratory of the paint manufacturer George Simpson, located in Walworth, south of London, made another aniline dye with a similar red-purple color, which they began to manufacture in 1860 under the name "roseine". In 1860 they changed the name of the color to "magenta", in honor of the Battle of Magenta fought between the armies of France and Kingdom of Sardinia and Austrians at Magenta, Lombardy the year before, and the new color became a commercial success. [3] [7]

Starting in 1935 the family of quinacridone dyes was developed. These have colors ranging from red to violet, so nowadays a quinacridone dye is often used for magenta. Various tones of magenta—light, bright, brilliant, vivid, rich, or deep—may be formulated by adding varying amounts of white to quinacridone artist's paints.

Another dye used for magenta is Lithol Rubine BK. One of its uses is as a food coloring.

In color printing, the color called process magenta, pigment magenta, or printer's magenta is one of the three primary pigment colors which, along with yellow and cyan, constitute the three subtractive primary colors of pigment. (The secondary colors of pigment are blue, green, and red.) As such, the hue magenta is the complement of green: magenta pigments absorb green light; thus magenta and green are opposite colors.

The CMYK printing process was invented in the 1890s, when newspapers began to publish color comic strips.

Process magenta is not an RGB color, and there is no fixed conversion from CMYK primaries to RGB. Different formulations are used for printer's ink, so there may be variations in the printed color that is pure magenta ink. A typical formulation of process magenta is shown in the color box at right.

At right is the web color magenta. It is one of the three secondary colors in the RGB color model. On the RGB color wheel, magenta is the color between rose and violet, and halfway between red and blue.

This color is called magenta in X11 and fuchsia in HTML. In the RGB color model, it is created by combining equal intensities of red and blue light. The two web colors magenta and fuchsia are exactly the same color. Sometimes the web color magenta is called electric magenta or electronic magenta.

In science and culture

Magenta is a common color for flowers, particularly in the tropics and sub-tropics. Because magenta is the complementary colour of green, magenta flowers have the highest contrast with the green foliage, and therefore are more visible to the animals needed for their pollination.

The German telecommunications company Deutsche Telekom uses a magenta logo. It has sought to prevent use of any similar color by other businesses, even those in unrelated fields, such as the insurance company Lemonade. [11]

Magenta was the English name of Tokyo's Oedo subway line color. It was later changed to ruby.

In aircraft autopilot systems, the path that pilot or plane should follow to its destination is usually indicated in cockpit displays using the color magenta. [12]

The Reserve Bank of India (RBI) issued a Magenta colored banknote of ₹2000 denomination on 8 November 2016 under Mahatma Gandhi New Series. This is the highest currency note printed by RBI that is in active circulation in India.

In vexillology and heraldry

Magenta is an extremely rare color to find on heraldic flags and coats of arms, [13] since its adoption dates back to relatively recent times. However, there are some examples of its use: