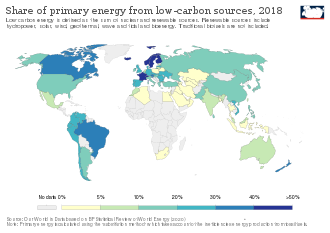 Low-carbon power is electricity produced with substantially lower greenhouse gas emissions than conventional fossil fuel power generation. The energy transition to low-carbon power is one of the most important actions required to limit climate change. [1] Power sector emissions may have peaked in 2018. [2] During the first six months of 2020, scientists observed a 8.8% decrease in global CO2 emissions relative to 2019 due to COVID-19 lockdown measures. [3] The two main sources of the decrease in emissions included ground transportation (40%) and the power sector (22%). This event is the largest absolute decrease in CO2 emissions in history, but emphasizes that low-carbon power "must be based on structural and transformational changes in energy-production systems". [3]

Low carbon power generation sources include wind power, solar power, nuclear power and most hydropower. [4] [5] The term largely excludes conventional fossil fuel plant sources, and is only used to describe a particular subset of operating fossil fuel power systems, specifically, those that are successfully coupled with a flue gas carbon capture and storage (CCS) system. [6] Globally almost 40% of electricity generation came from low-carbon sources in 2020: about 10% being nuclear power, almost 10% wind and solar, and around 20% hydropower and other renewables. [1] 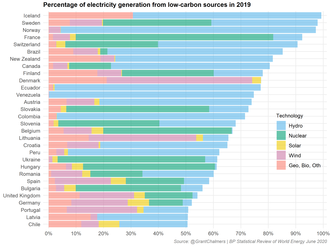 Percentage of electricity generation from low-carbon sources in 2019.

During the late 20th and early 21st century significant findings regarding global warming highlighted the need to curb carbon emissions. From this, the idea for low-carbon power was born. The Intergovernmental Panel on Climate Change (IPCC), established by the World Meteorological Organization (WMO) and the United Nations Environment Program (UNEP) in 1988, set the scientific precedence for the introduction of low-carbon power. The IPCC has continued to provide scientific, technical and socio-economic advice to the world community, through its periodic assessment reports and special reports. [7]

Internationally, the most prominent[ according to whom?] early step in the direction of low carbon power was the signing of the Kyoto Protocol, which came into force on 16 February 2005, under which most industrialized countries committed to reduce their carbon emissions. The historical event set the political precedence for introduction of low-carbon power technology.

On a social level, perhaps the biggest factor[ according to whom?] contributing to the general public's awareness of climate change and the need for new technologies, including low carbon power, came from the documentary An Inconvenient Truth, which clarified and highlighted the problem of global warming.

This section is an excerpt from Life-cycle greenhouse gas emissions of energy sources § Global warming potential of selected electricity sources. 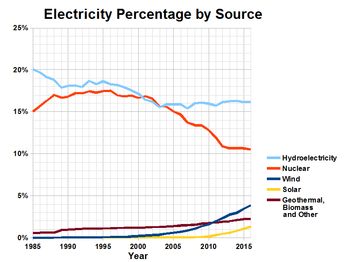 There are many options for lowering current levels of carbon emissions. Some options, such as wind power and solar power, produce low quantities of total life cycle carbon emissions, using entirely renewable sources. Other options, such as nuclear power, produce a comparable amount of carbon dioxide emissions as renewable technologies in total life cycle emissions, but consume non-renewable, but sustainable [11] materials ( uranium). The term low-carbon power can also include power that continues to utilize the world's natural resources, such as natural gas and coal, but only when they employ techniques that reduce carbon dioxide emissions from these sources when burning them for fuel, such as the, as of 2012, pilot plants performing Carbon capture and storage. [6] [12]

Technologies to produce electric power with low-carbon emissions are in use at various scales. Together, they accounted for almost 40% of global electricity in 2020, with wind and solar almost 10%. [1]

The 2014 Intergovernmental Panel on Climate Change report identifies nuclear, wind, solar and hydroelectricity in suitable locations as technologies that can provide electricity with less than 5% of the lifecycle greenhouse gas emissions of coal power. [15] 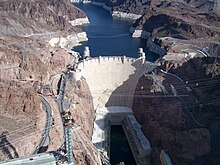 Hydroelectric plants have the advantage of being long-lived and many existing plants have operated for more than 100 years. Hydropower is also an extremely flexible technology from the perspective of power grid operation. Large hydropower provides one of the lowest cost options in today's energy market, even compared to fossil fuels and there are no harmful emissions associated with plant operation. [16] However, there are typically low greenhouse gas emissions with reservoirs, and possibly high emissions in the tropics.

However, there are several significant social and environmental disadvantages of large-scale hydroelectric power systems: dislocation, if people are living where the reservoirs are planned, release of significant amounts of carbon dioxide and methane during construction and flooding of the reservoir, and disruption of aquatic ecosystems and birdlife. [18] There is a strong consensus now that countries should adopt an integrated approach towards managing water resources, which would involve planning hydropower development in co-operation with other water-using sectors. [16] 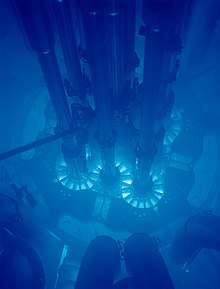 Nuclear power, with a 10.6% share of world electricity production as of 2013, is the second largest low-carbon power source. [19]

According to the IAEA and the European Nuclear Society, worldwide there were 68 civil nuclear power reactors under construction in 15 countries in 2013. [23] [24] China has 29 of these nuclear power reactors under construction, as of 2013, with plans to build many more, [24] [25] while in the US the licenses of almost half its reactors have been extended to 60 years, [26] and plans to build another dozen are under serious consideration. [27] There is also a considerable number[ clarification needed] of new reactors being built in South Korea, India, and Russia. Nuclear power's capability to add significantly to future low carbon energy growth depends on several factors, including the economics of new reactor designs, such as Generation III reactors, public opinion and national and regional politics.

The 104 U.S. nuclear plants are undergoing a Light Water Reactor Sustainability Program, to sustainably extend the life span of the U.S. nuclear fleet by a further 20 years. With further US power plants under construction in 2013, such as the two AP1000s at Vogtle Electric Generating Plant. However the Economics of new nuclear power plants are still evolving and plans to add to those plants are mostly in flux. [28]

In 2021 United Nations Economic Commission for Europe (UNECE) described nuclear power as important tool to mitigate climate change that has prevented 74 Gt of CO2 emissions over the last half century, providing 20% of energy in Europe and 43% of low-carbon energy. [29] 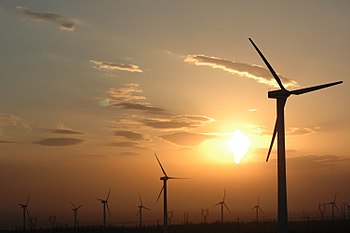 Wind power stations in Xinjiang, China
These paragraphs are an excerpt from Wind power.

Wind power or wind energy is the use of wind turbines to generate electricity. Wind power is a popular, sustainable, renewable energy source that has a much smaller impact on the environment than burning fossil fuels. Wind farms consist of many individual wind turbines, which are connected to the electric power transmission network.

In 2020, wind supplied almost 1600 TWh of electricity, which was over 5% of worldwide electrical generation and about 2% of energy consumption. [30] [31] With over 100 GW added during 2020, mostly in China, global installed wind power capacity reached more than 730 GW. [32] [31] But to help meet Paris Agreement goals to limit climate change analysts say it should expand much faster - by over 1% of electricity generation per year. [33] Expansion of wind power is being hindered by fossil fuel subsidies. [34] [35] [36]

Offshore wind is steadier and stronger than on land and has less visual impact. Although there is less offshore at present and construction and maintenance costs are higher it is forecast to expand. [37]

Onshore wind is an inexpensive source of electric power, competitive with, or in many places cheaper than, coal or gas plants. Onshore wind farms have a greater visual impact on the landscape than other power stations, as they need to be spread over more land [38] [39] and need to be built in rural areas. [40] Small onshore wind farms can feed some energy into the grid or provide power to isolated off-grid locations.

Wind power is variable renewable energy. So power-management techniques are used to match supply and demand such as: wind hybrid power systems, hydroelectric power or other dispatchable power sources, excess capacity, geographically distributed turbines, exporting and importing power to neighboring areas, grid storage, and reducing demand when wind production is low. As the proportion of wind power in a region increases the grid may need to be upgraded. [41] [42] Weather forecasting permits the electric-power network to be readied for the predictable variations in production that occur.

The PS10 concentrates sunlight from a field of heliostats on a central tower.

Commercial concentrated solar power plants were first developed in the 1980s. The 354 MW SEGS CSP installation is the largest solar power plant in the world, located in the Mojave Desert of California. Other large CSP plants include the Solnova Solar Power Station (150 MW) and the Andasol solar power station (150 MW), both in Spain. The over 200 MW Agua Caliente Solar Project in the United States, and the 214 MW Charanka Solar Park in India, are the world's largest photovoltaic plants. Solar power's share of worldwide electricity usage at the end of 2014 was 1%. [44]

Current worldwide installed capacity is 10,715 megawatts (MW), with the largest capacity in the United States (3,086 MW), [47] Philippines, and Indonesia. Estimates of the electricity generating potential of geothermal energy vary from 35 to 2000 GW. [46]

Geothermal power is considered to be sustainable because the heat extraction is small compared to the Earth's heat content. [48] The emission intensity of existing geothermal electric plants is on average 122 kg of CO
2
per megawatt-hour (MW·h) of electricity, a small fraction of that of conventional fossil fuel plants. [49]

Tidal power is a form of hydropower that converts the energy of tides into electricity or other useful forms of power. The first large-scale tidal power plant (the Rance Tidal Power Station) started operation in 1966. Although not yet widely used, tidal power has potential for future electricity generation. Tides are more predictable than wind energy and solar power.

Carbon capture and storage captures carbon dioxide from the flue gas of power plants or other industry, transporting it to an appropriate location where it can be buried securely in an underground reservoir. While the technologies involved are all in use, and carbon capture and storage is occurring in other industries (e.g., at the Sleipner gas field), no large scale integrated project has yet become operational within the power industry.

Improvements to current carbon capture and storage technologies could reduce CO2 capture costs by at least 20-30% over approximately the next decade, while new technologies under development promise more substantial cost reduction. [50]

As a percentage of all anthropogenic greenhouse gas emissions, carbon dioxide (CO2) accounts for 72 percent (see Greenhouse gas), and has increased in concentration in the atmosphere from 315 parts per million (ppm) in 1958 to more than 375 ppm in 2005. [52]

Estimates state that by 2020 the world will be producing around twice as much carbon emissions as it was in 2000. [54]

The European Union hopes to sign a law mandating net-zero greenhouse gas emissions in the coming year for all 27 countries in the union. 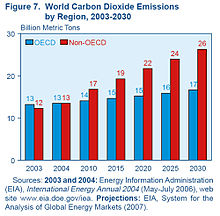 In the transportation sector there are moves away from fossil fuels and towards electric vehicles, such as mass transit and the electric car. These trends are small, but may eventually add a large demand to the electrical grid.[ citation needed]

Domestic and industrial heat and hot water have largely been supplied by burning fossil fuels such as fuel oil or natural gas at the consumers' premises. Some countries have begun heat pump rebates to encourage switching to electricity, potentially adding a large demand to the grid. [58]

Coal-fired power plants are losing market share compared to low carbon power, and any built in the 2020s risk becoming stranded assets [2] or stranded costs, partly because their capacity factors will decline. [59]