From Wikipedia
https://en.wikipedia.org/wiki/Liu_Hui
This article is about the mathematician. For the politician, see Liu Hui (politician). For the businessman, see Lee Liu.
In this Chinese name, the family name is Liu.

Liu Hui ( fl.  3rd century CE) was a Chinese mathematician and writer who lived in the state of Cao Wei during the Three Kingdoms period (220–280) of China. In 263, he edited and published a book with solutions to mathematical problems presented in the famous Chinese book of mathematics known as The Nine Chapters on the Mathematical Art, in which he was possibly the first mathematician to discover, understand and use negative numbers. He was a descendant of the Marquis of Zi District (菑鄉侯) of the Eastern Han dynasty, whose marquisate is in present-day Zichuan District, Zibo, Shandong. He completed his commentary to the Nine Chapters in the year 263. He probably visited Luoyang, where he measured the sun's shadow.

Liu provided commentary on a mathematical proof of a theorem identical to the Pythagorean theorem. [5] Liu called the figure of the drawn diagram for the theorem the "diagram giving the relations between the hypotenuse and the sum and difference of the other two sides whereby one can find the unknown from the known". [6] 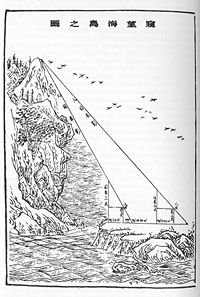 Liu Hui also presented, in a separate appendix of 263 AD called Haidao Suanjing or The Sea Island Mathematical Manual, several problems related to surveying. This book contained many practical problems of geometry, including the measurement of the heights of Chinese pagoda towers. [12] This smaller work outlined instructions on how to measure distances and heights with "tall surveyor's poles and horizontal bars fixed at right angles to them". [13] With this, the following cases are considered in his work:

Liu Hui's information about surveying was known to his contemporaries as well. The cartographer and state minister Pei Xiu (224–271) outlined the advancements of cartography, surveying, and mathematics up until his time. This included the first use of a rectangular grid and graduated scale for accurate measurement of distances on representative terrain maps. [14] Liu Hui provided commentary on the Nine Chapter's problems involving building canal and river dykes, giving results for total amount of materials used, the amount of labor needed, the amount of time needed for construction, etc. [15]

Although translated into English long beforehand, Liu's work was translated into French by Guo Shuchun, a professor from the Chinese Academy of Sciences, who began in 1985 and took twenty years to complete his translation.