Restoration of Ichthyostega, an early tetrapod from the Devonian

Marine otter of the west coast of South America

This is a list of tetrapods that are semiaquatic; that is, while being at least partly terrestrial, they spend part of their life cycle or a significant fraction of their time in water as part of their normal behavior, and/or obtain a significant fraction of their food from an aquatic habitat. The very earliest tetrapods, such as Ichthyostega, were semiaquatic, having evolved from amphibious lobe-finned fish.

Some marine mammals, such as the marine otter, the polar bear and pinnipeds, are semiaquatic, while others, such as the sea otter, cetaceans and sirenians, are fully aquatic. The only fully aquatic nonmarine mammals are several manatees (the Amazonian manatee and some populations of African manatee) and certain small cetaceans ( river dolphins, the tucuxi, and some populations of Irrawaddy dolphin and finless porpoise). No bird species is fully aquatic, as all must lay and incubate their amniotic eggs, as well as begin raising their young, on land or ice. Similarly among marine reptiles, sea turtles are almost fully aquatic, but must come ashore to lay eggs. Marine iguanas and partly marine crocodiles (such as the saltwater crocodile and the American crocodile) are all semiaquatic. Most sea snakes are ovoviviparous (live-bearing) and fully aquatic (the exceptions being the oviparous, semiaquatic sea kraits). A few freshwater snakes are also ovoviviparous and fully aquatic (e.g., Erpeton tentaculatum and Acrochordidae), but the majority are semiaquatic. Most amphibians have an aquatic larval stage and are at least semiaquatic for that reason, but there are many exceptions to this generalization.

The aquatic component of a semiaquatic species' lifestyle may be either obligatory or facultative to varying degrees (examples of the latter are the Arctic fox, jaguar and green iguana).

Note: dagger symbols, "†", have been used to indicate a listed taxon is extinct.

All extant fully aquatic mammals except the sea otter are found in two clades of exclusively aquatic species, Cetacea and Sirenia; the extinct desmostylians are also thought to have been fully aquatic (these groups are thought to have become fully aquatic about 45, 40 and 30 Ma ago, respectively). In contrast, semiaquatic mammals are widely distributed throughout the class. However, extant semiaquatic swimming marine mammals are restricted to Carnivora (among which, pinnipeds apparently appeared about 20 Ma ago). Semiaquatic (carnivorous) rodents have been noted as having larger than normal brains for their size, possibly as a consequence of using their vibrissae for acoustic detection of prey. [1] [2]

Asian elephant using its trunk as a snorkel, [3] India 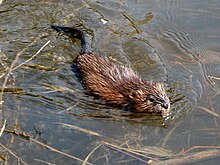 Jaguar, in the Pantanal 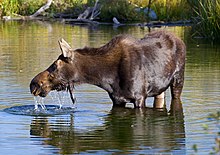 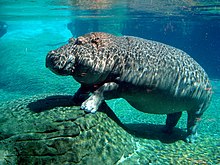 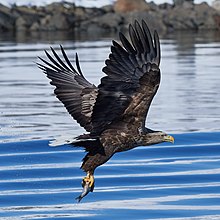 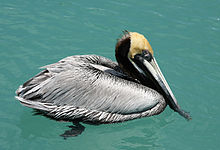 The great majority of semiaquatic birds are found within three clades whose members are mostly semiaquatic: Aequorlitornithes, Anseriformes and Gruiformes, thought to be about 64, 47 and 41 Ma old, respectively. [27] [note 2] 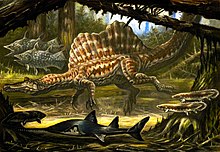 Only a few nonavian dinosaurs are thought to have been semiaquatic. While the Mesozoic had many types of marine reptiles, the combination of being oviparous and endothermic seems to have prevented the evolution of fully aquatic dinosaurs, as in birds. 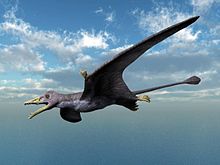 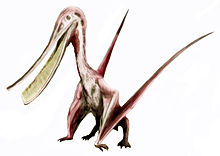 A number of types of pterosaurs are thought to have been piscivores, and a few are suspected of being molluscivores.

Semiaquatic forms are widely distributed among extant and extinct reptiles, and extinct semiaquatic or fully aquatic marine forms were once ecologically prominent.

Amphibians differ from other semiaquatic tetrapods in that their semiaquatic lifestyle is ancestral, rather than being the result of a secondary evolutionary trend from a terrestrial state back towards an aquatic environment. Thus, they are the only tetrapods to possess gills. All extant amphibians that are semiaquatic or fully aquatic inhabit freshwater habitats, with the exception of the crab-eating frog, which also exploits brackish habitats.

Most amphibians have an aquatic larval stage and thus are at least semiaquatic by virtue of this fact. Many adult amphibians are also semiaquatic (while others are fully aquatic or terrestrial). However, some amphibians lack an aquatic larval stage. Some frogs, such as most leiopelmatids, most ranixalids, some leptodactylids, some myobatrachids, Darwin's frog and the Seychelles frog, have nonaquatic tadpoles. Some caecilians, many frogs such as saddleback toads, most sooglossids and the greenhouse frog, [32] and most plethodontid salamanders lay eggs on land in which the larvae develop into adult form before they hatch. The alpine salamander [33] and African live-bearing toads ( Nectophrynoides and Nimbaphrynoides) [34] are ovoviviparous and give birth on land. Additionally, about 75% of caecilians are viviparous.