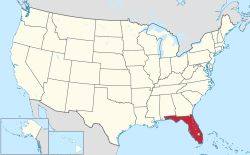 Map of the United States with Florida highlighted

The formation and dissolution of municipalities is governed by Chapter 165 of the Florida Statutes. All Florida municipalities must be operated under a municipal charter approved by a majority of the registered voters in the geographic area of the municipality, which must be confirmed by the state legislature through special legislation. [10]

The largest cities in Florida (population over 200,000) utilize the strong mayor–council form of government. The mayor typically appoints a chief administrative officer who performs the same function as a city manager [11] which is utilized by 70% of Florida's municipalities, whose mayors are primarily symbolic and ceremonial. [12] [13] [14] [15]

Note: The table of contents only applies when the list is sorted by place name.