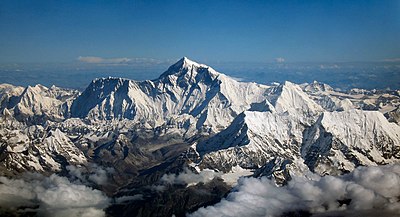 Aerial view of Mount Everest from the south. The peak rises over Lhotse, while Nuptse is the ridge on the left.

There are at least 109 mountains on Earth with elevations greater than 7,200 metres (23,622 ft) above sea level. The vast majority of these mountains are located on the edge of the Indian and Eurasian plate.

The dividing line between a mountain with multiple peaks and separate mountains is not always clear (see also Highest unclimbed mountain). A popular and intuitive way to distinguish mountains from subsidiary peaks is by their height above the highest saddle connecting it to a higher summit, a measure called topographic prominence or re-ascent (the higher summit is called the "parent peak"). A common definition of a mountain is a summit with 300 m (980 ft) prominence. Alternatively, a relative prominence (prominence/height) is used (usually 7–8%) to reflect that in higher mountain ranges everything is on a larger scale. The table below lists the highest 100 summits with at least 500 m (1,640 ft) prominence, approximating a 7% relative prominence. A drawback of a prominence-based list is that it may exclude well-known or spectacular mountains that are connected via a high ridge to a taller summit, such as Eiger, Nuptse or Annapurna IV. A few such peaks and mountains with nearly sufficient prominence are included in this list, and given a rank of "S".

Though some parts of the world, especially the most mountainous parts, have never been thoroughly mapped, it is unlikely that any mountains this high have been overlooked, because synthetic aperture radar can and has been used to measure elevations of most otherwise inaccessible places. Still, heights or prominences may be revised, so that the order of the list may change and even "new" mountains could enter the list over time. To be safe, the list has been extended to include all 7,200 m (23,622 ft) peaks.

The highest mountains above sea level are generally not the highest above the surrounding terrain. There is no precise definition of surrounding base, but Denali, Mount Kilimanjaro and Nanga Parbat are possible candidates for the tallest mountain on land by this measure.[ citation needed] The bases of mountain islands are below sea level, and given this consideration Mauna Kea (4,207 m (13,802 ft) above sea level) is the world's tallest mountain and volcano, rising about 10,203 m (33,474 ft) from the Pacific Ocean floor. Mount Lamlam on Guam is periodically claimed to be among the world's highest mountains because it is adjacent to the Mariana Trench; the most extreme claim is that, measured from Challenger Deep 313 kilometres (194 mi) away, Mount Lamlam is 37,820 feet (11,530 m) tall. [1] [2] Ojos del Salado has the greatest rise on Earth: 13,420 m (44,029 ft) vertically to the summit[ citation needed] from the bottom of the Atacama Trench, which is about 560 km (350 mi) away, although most of this rise is not part of the mountain.

The highest mountains above sea level are also not those with peaks farthest from the centre of the Earth, because the figure of the Earth is not spherical. Sea level closer to the equator is several kilometres farther from the centre of the Earth. The summit of Chimborazo, Ecuador's tallest mountain, is usually considered to be the farthest point from the Earth's centre, although the southern summit of Peru's tallest mountain, Huascarán, is another contender. [3] Both have elevations above sea level more than 2 km less than that of Everest.

As of December 2018 [update], the highest peaks on four of the mountains — Gangkhar Puensum, Labuche Kang III, Karjiang, and Tongshanjiabu, all located in Bhutan or China — have not been ascended. The most recent peak to have its first ever ascent is Saser Kangri II East, in India, on 24 August 2011.

The following graph ranks the countries by number of mountain peaks over 7,200 metres (23,622 ft) above sea level. Note that 38 peaks are on de facto borders and two ( Jongsong Peak and Sia Kangri) are on tripoints. 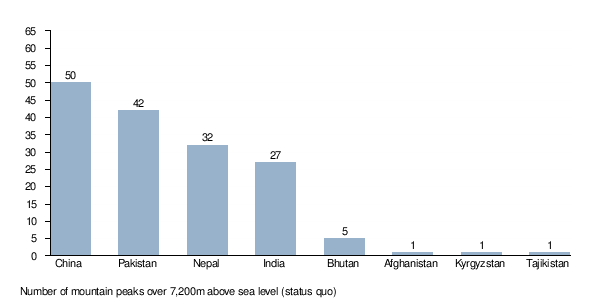