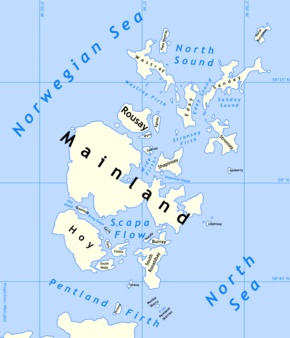 This is a list of Orkney islands in Scotland. The Orkney archipelago is located 16 kilometres (9.9 mi) north of mainland Scotland and comprises over 70 islands and skerries, of which 20 are permanently inhabited. In addition to the Orkney Mainland there are three groups of islands. The North and South Isles lie respectively north and south of Mainland. The Pentland Skerries are a group of small islands in the Pentland Firth, a dangerous stretch of water between mainland Scotland and the larger islands of Orkney, through which run the strongest tidal streams in Britain. [1] The Island of Stroma is often mistakenly included with the Orkney Islands, but is part of Caithness.

The definition of an island used in this list is that it is 'land that is surrounded by seawater on a daily basis, but not necessarily at all stages of the tide, excluding human devices such as bridges and causeways'. [2] There are four islands joined to the Orkney Mainland by a series of causeways known as the Churchill Barriers. They are South Ronaldsay, Burray, Lamb Holm and Glimps Holm. In addition, Hunda is connected to Burray by a causeway. [3] The barriers were constructed by Italian prisoners-of-war as a means of preventing enemy submarine access to the vast natural harbour of Scapa Flow after the sinking of HMS Royal Oak by a German U-boat in 1939 with the loss of 883 lives. The Italian prisoners constructed a small Roman Catholic chapel on Lamb Holm as a place of worship during their incarceration. [4]

Most of the islands have a bedrock formed from Old Red Sandstone, which is about 400 million years old, and was laid down in the Devonian period. [5] The islands have good agricultural qualities and have been continuously inhabited for thousands of years, [6] as evidenced by the World Heritage Site of the Heart of Neolithic Orkney. The archipelago is exposed to wind and tide, and there are numerous lighthouses as an aid to navigation. [7] The European Marine Energy Centre, which is located at Stromness, is currently testing various wave and tidal energy devices from Billia Croo on the Mainland and Eday. [8] The islands all fall within the Orkney Islands Council area. Most of the larger islands have development trusts that support the local economy. [9] [10] 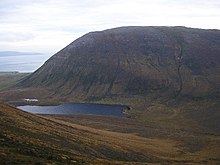 This is a list of islands with an area greater than 15 hectares (approximately 37 acres). Records for the last date of settlement for the smaller uninhabited islands are incomplete, but all of the islands listed here would have been inhabited at some point during the Neolithic, Pictish or Norse periods.

'Ward Hill' or a variant thereof is very common as the name of the highest point on the island. These locations are named after those high places used for the lighting of warning beacons. [12] 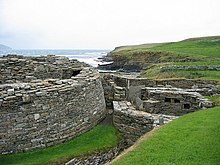 Westray Skiffs racing in the Bay of Pierowall

The population of Inner Holm in 2001 was one, although the figure was included in the total for Mainland at the time of the 2001 census. [11]

Lamb Holm is "included in the NRS statistical geography for inhabited islands but had no usual residents at the time of either the 2001 or 2011 censuses". [11] 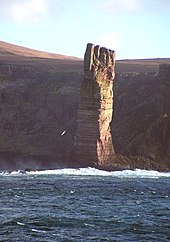 The Old Man of Hoy

In the vicinity of:

The remote islets of Sule Skerry and Sule Stack, which lie 37 miles (60 km) west of the archipelago form part of Orkney for local government purposes.