Tracks of all Category 5 Pacific hurricanes northeast of the International Date Line until 2018. Note that parts of some tracks cross the Date Line and are omitted.

Category 5 hurricanes are tropical cyclones that reach Category 5 intensity on the Saffir–Simpson hurricane scale. They are by definition the strongest hurricanes that can form on planet Earth. They are rare in the northeastern Pacific Ocean and generally form only once every several years. In general, Category 5s form in clusters in single years. Landfalls by such storms are rare due to the generally westerly path of tropical cyclones in the Northern Hemisphere. The term "hurricane" is used for tropical cyclones in the Pacific Ocean, north of the equator and east of the International Date Line. A Category 5 Pacific hurricane is therefore a tropical cyclone in the north Pacific Ocean that reached Category 5 intensity east of the International Date Line. Identical phenomena in the north Pacific Ocean west of the dateline are called "typhoons" or "super typhoons". Category 5 super typhoons generally happen several times per season, so cyclones of that intensity are not exceptional for that region. This difference in terminology therefore excludes storms such as Super Typhoon Paka and Super Typhoon Oliwa of 1997, and Super Typhoon Genevieve of 2014, which formed east of the dateline but did not reach Category 5 intensity until after crossing the dateline.

A Category 5 hurricane is defined as having sustained windspeeds of at least 137 knots (157 mph; 252 km/h; 70 m/s) over a one-minute period 10 metres (32 ft 10 in) above the ground. [1] [2] As a tropical cyclone is moving, its wind field is asymmetric. In the northern hemisphere, the strongest winds are on the right side of the storm (relative to the direction of motion). The highest winds given in advisories are those from the right side. [3]

Since the 1959 season, only 18 hurricanes are known to have reached Category 5 intensity. There are no known Category 5 storms occurring before 1959. It is possible that some earlier storms reached Category 5 over open waters, but they were never recognized because they never affected land and remained at sea. [4]

Hurricane Linda at its peak intensity on September 12, 1997. 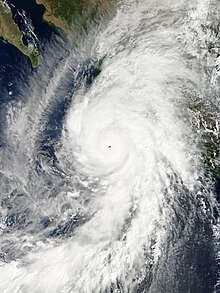 Hurricane Patricia shortly after its record peak intensity on October 23, 2015.

This lists all of the Category 5 hurricanes in the order in which they formed. Only 1994's Hurricane Emilia and 2006's Hurricane Ioke have reached Category 5 intensity more than once; that is, by weakening into a Category 4 or weaker storm and later re-strengthening to a Category 5 storm.

Before the advent of reliable geostationary satellite coverage in 1966, the number of eastern Pacific tropical cyclones was significantly underestimated. [5] It is therefore very possible that there are additional Category 5 hurricanes other than those listed, but they were not reported and therefore not recognized. However, the lack of Pacific Category 5 hurricanes during the late 1970s, 1980s, and early 1990s, is certain. [4]

The minimum central pressure of these storms is, for the most part, estimated from satellite imagery using the Dvorak technique. In the case of Kenna, [6] Ava, [7] Patricia, and Lane, the central pressure was measured by hurricane hunter aircraft flying into the storm. [4] Because of the estimation of central pressures, it is possible that other storms more intense than these have formed. [8]

The reason for estimating the pressure (in lieu of direct measurements) is the fact that most of these storms did not threaten land. [9] As Kenna, Patricia and Lane were threatening land, their pressures were measured by hurricane hunters using dropsondes. [6] While Hurricane Ava never threatened land, [4] it too was flown into by hurricane hunters to test equipment and conduct research. [7]

Older storms have incomplete pressure readings, since there were no satellite-based estimates; the only observations were taken by ships, land-based observations, or reconnaissance aircraft when available. Ava's minimum known pressure was measured when it was a Category 4 hurricane, for example. [4] John and Gilma have incomplete pressures because the Central Pacific Hurricane Center, in general, did not publish pressure on systems in the central Pacific (140°W to the dateline) at the time. [10] This list is not identical to the list of most intense Pacific hurricanes. The most intense known Category 4 storm in the eastern Pacific was Odile (2014). The lowest pressure of this storm was 918 millibars, lower than that of some Category 5's, such as Guillermo. [4]

Two Pacific hurricanes are known to have reached Category 5 intensity multiple times: Emilia and Ioke. Both did it twice, and Ioke reached Category 5 status a third time as a typhoon while in the western Pacific. [4] Hurricane Ioke was tied for the longest-lasting Category 5 hurricane recorded, spending 42 hours at that strength, [11] while hurricanes John and Linda had the longest time spent consecutively at that intensity. [4]

Hurricane Hernan off the coast of Mexico on September 1, 2002, at peak strength.

Microwave radar in the tail of a C130 during a flight into Hurricane Ava. 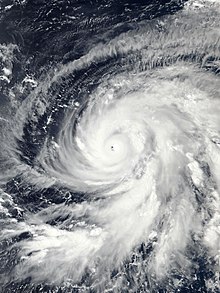 Hurricane Walaka, the second of three Category 5 hurricanes during the 2018 season.

The general lack of Category 5s in non warm-ENSO years is because of there being limited space for development. The prevailing ocean currents of the area carry warm water to the west. As there is no large piece of land to block the water and cause it to "pile up" like in the Atlantic, the area suitable for all tropical cyclones is small. Farther out to sea, while waters are still warm, wind shear limits the development of tropical cyclones in the waters south of Hawaii. This makes an otherwise ideal region unfavorable for tropical cyclones.

Hurricane Kenna, one of only four Category 5 Pacific hurricanes to make landfall at any intensity.

In addition to these four systems, hurricanes John, Linda, Ioke, Lane, and Walaka all threatened land at some point during their existence. John, Ioke and Walaka had minimal impacts on Johnston Atoll, John caused heavy surf in Hawaii, and Walaka passed close to East Island in the French Frigate Shoals. [12] Linda was briefly forecast to approach southern California, and it passed close to Socorro Island near peak intensity. [11] [17] [18] Out of the five aforementioned hurricanes, Lane had the most significant impact on land, threatening Hawaii as a major hurricane, and dropping more than 40 inches (1,000 mm) of rain across many areas. [19]

The reason for the lack of landfalls is that tropical cyclones in the northern hemisphere usually travel to the west. [20] In the Atlantic, this sends hurricanes towards North America. In the eastern Pacific, this sends tropical cyclones out into the open ocean to dissipate over waters too cool to support them or in environments with high wind shear. Hawaii, the only heavily populated island chain in the eastern Pacific, is protected from most hurricanes by a subtropical ridge and because its land area is small relative to the total ocean area where hurricanes form and travel.