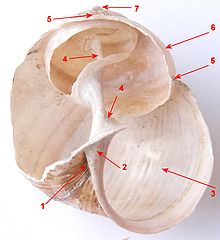 A shell of Helix pomatia with part of shell removed; the outer lip and the inner lip are clearly visible

In the shell of gastropod mollusks (a snail shell), the lip is the free margin of the peristome (synonym: peritreme) or aperture (the opening) of the gastropod shell.

The outer lip is usually thin and sharp in immature shells, and in some adults (e.g. the land snails Helicella and Bulimulus). However, in some other land snails and in many marine species the outer lip is thickened (also called callused), or reflected (turned outwards). In some other marine species it is curled inwards (inflected), as in the cowries such as Cypraea. It can also be expanded, as in Strombus; it can have finger-like processes (digitate) or it can be fringed with spines (foliated), as in Murex.

The lip is called emarginate when it is incised or slit, as in Pleurotomaria. It is described as effuse when the basal or anterior extremity is slightly produced, depressed or reflected, as in Thiara. When the lip is bent into an "s" curve it is called sinuous, as is the case in the sigmoidal margin of Janthina exigua.

Interiorly when the lip has teeth it is dentate as in Nerita. When the teeth are rib-like it is described as plicate or lamellate. When it has numerous large plications, nodules or teeth it is known as ringent, as in Pythia. The lip is called sulcate, when it is grooved within. It is known as labiate or marginate, when it is callously thickened near the margin.