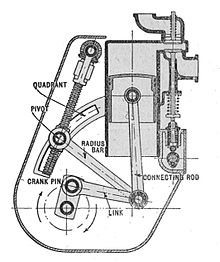 A mechanical linkage is an assembly of bodies connected to manage forces and movement. The movement of a body, or link, is studied using geometry so the link is considered to be rigid. [1] The connections between links are modeled as providing ideal movement, pure rotation or sliding for example, and are called joints. A linkage modeled as a network of rigid links and ideal joints is called a kinematic chain.

Linkages may be constructed from open chains, closed chains, or a combination of open and closed chains. Each link in a chain is connected by a joint to one or more other links. Thus, a kinematic chain can be modeled as a graph in which the links are paths and the joints are vertices, which is called a linkage graph.

The deployable mirror linkage is constructed from a series of rhombus or scissor linkages. 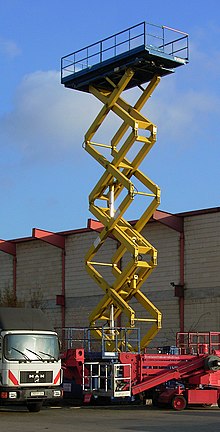 The movement of an ideal joint is generally associated with a subgroup of the group of Euclidean displacements. The number of parameters in the subgroup is called the degrees of freedom (DOF) of the joint. Mechanical linkages are usually designed to transform a given input force and movement into a desired output force and movement. The ratio of the output force to the input force is known as the mechanical advantage of the linkage, while the ratio of the input speed to the output speed is known as the speed ratio. The speed ratio and mechanical advantage are defined so they yield the same number in an ideal linkage.

A kinematic chain, in which one link is fixed or stationary, is called a mechanism, [2] and a linkage designed to be stationary is called a structure.

Perhaps the simplest linkage is the lever, which is a link that pivots around a fulcrum attached to ground, or a fixed point. As a force rotates the lever, points far from the fulcrum have a greater velocity than points near the fulcrum. Because power into the lever equals the power out, a small force applied at a point far from the fulcrum (with greater velocity) equals a larger force applied at a point near the fulcrum (with less velocity). The amount the force is amplified is called mechanical advantage. This is the law of the lever.

Two levers connected by a rod so that a force applied to one is transmitted to the second is known as a four-bar linkage. The levers are called cranks, and the fulcrums are called pivots. The connecting rod is also called the coupler. The fourth bar in this assembly is the ground, or frame, on which the cranks are mounted.

Linkages are important components of machines and tools. Examples range from the four-bar linkage used to amplify force in a bolt cutter or to provide independent suspension in an automobile, to complex linkage systems in robotic arms and walking machines. The internal combustion engine uses a slider-crank four-bar linkage formed from its piston, connecting rod, and crankshaft to transform power from expanding burning gases into rotary power. Relatively simple linkages are often used to perform complicated tasks.

Interesting examples of linkages include the windshield wiper, the bicycle suspension, the leg mechanism in a walking machine and hydraulic actuators for heavy equipment. In these examples the components in the linkage move in parallel planes and are called planar linkages. A linkage with at least one link that moves in three-dimensional space is called a spatial linkage. The skeletons of robotic systems are examples of spatial linkages. The geometric design of these systems relies on modern computer aided design software.

Archimedes [3] applied geometry to the study of the lever. Into the 1500s the work of Archimedes and Hero of Alexandria were the primary sources of machine theory. It was Leonardo da Vinci who brought an inventive energy to machines and mechanism. [4]

In the mid-1700s the steam engine was of growing importance, and James Watt realized that efficiency could be increased by using different cylinders for expansion and condensation of the steam. This drove his search for a linkage that could transform rotation of a crank into a linear slide, and resulted in his discovery of what is called Watt's linkage. This led to the study of linkages that could generate straight lines, even if only approximately; and inspired the mathematician J. J. Sylvester, who lectured on the Peaucellier linkage, which generates an exact straight line from a rotating crank. [5]

The work of Sylvester inspired A. B. Kempe, who showed that linkages for addition and multiplication could be assembled into a system that traced a given algebraic curve. [6] Kempe's design procedure has inspired research at the intersection of geometry and computer science. [7] [8]

In the late 1800s F. Reuleaux, A. B. W. Kennedy, and L. Burmester formalized the analysis and synthesis of linkage systems using descriptive geometry, and P. L. Chebyshev introduced analytical techniques for the study and invention of linkages. [5]

In the mid-1900s F. Freudenstein and G. N. Sandor [9] used the newly developed digital computer to solve the loop equations of a linkage and determine its dimensions for a desired function, initiating the computer-aided design of linkages. Within two decades these computer techniques were integral to the analysis of complex machine systems [10] [11] and the control of robot manipulators. [12]

R. E. Kaufman [13] [14] combined the computer's ability to rapidly compute the roots of polynomial equations with a graphical user interface to unite Freudenstein's techniques with the geometrical methods of Reuleaux and Burmester and form KINSYN, an interactive computer graphics system for linkage design

The modern study of linkages includes the analysis and design of articulated systems that appear in robots, machine tools, and cable driven and tensegrity systems. These techniques are also being applied to biological systems and even the study of proteins.

A system of n rigid bodies moving in space has 6n degrees of freedom measured relative to a fixed frame. Include this frame in the count of bodies, so that mobility is independent of the choice of the fixed frame, then we have M = 6(N − 1), where N = n + 1 is the number of moving bodies plus the fixed body.

Joints that connect bodies in this system remove degrees of freedom and reduce mobility. Specifically, hinges and sliders each impose five constraints and therefore remove five degrees of freedom. It is convenient to define the number of constraints c that a joint imposes in terms of the joint's freedom f, where c = 6 − f. In the case of a hinge or slider, which are one degree of freedom joints, we have f = 1 and therefore c = 6 − 1 = 5.

Thus, the mobility of a linkage system formed from n moving links and j joints each with fi, i = 1, ..., j, degrees of freedom can be computed as,

where N includes the fixed link. This is known as Kutzbach–Grübler's equation

For a simple closed chain, n moving links are connected end-to-end by n+1 joints such that the two ends are connected to the ground link forming a loop. In this case, we have N=j and the mobility of the chain is

An example of a simple open chain is a serial robot manipulator. These robotic systems are constructed from a series of links connected by six one degree-of-freedom revolute or prismatic joints, so the system has six degrees of freedom.

An example of a simple closed chain is the RSSR spatial four-bar linkage. The sum of the freedom of these joints is eight, so the mobility of the linkage is two, where one of the degrees of freedom is the rotation of the coupler around the line joining the two S joints. 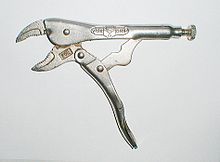 Locking pliers exemplify a four-bar, one degree of freedom mechanical linkage. The adjustable base pivot makes this a two degree-of-freedom five-bar linkage.

It is common practice to design the linkage system so that the movement of all of the bodies are constrained to lie on parallel planes, to form what is known as a planar linkage. It is also possible to construct the linkage system so that all of the bodies move on concentric spheres, forming a spherical linkage. In both cases, the degrees of freedom of the link is now three rather than six, and the constraints imposed by joints are now c = 3 − f.

In this case, the mobility formula is given by

and we have the special cases,

An example of a planar simple closed chain is the planar four-bar linkage, which is a four-bar loop with four one degree-of-freedom joints and therefore has mobility M = 1.

The most familiar joints for linkage systems are the revolute, or hinged, joint denoted by an R, and the prismatic, or sliding, joint denoted by a P. Most other joints used for spatial linkages are modeled as combinations of revolute and prismatic joints. For example,

Analysis and synthesis of linkages

The primary mathematical tool for the analysis of a linkage is known as the kinematics equations of the system. This is a sequence of rigid body transformation along a serial chain within the linkage that locates a floating link relative to the ground frame. Each serial chain within the linkage that connects this floating link to ground provides a set of equations that must be satisfied by the configuration parameters of the system. The result is a set of non-linear equations that define the configuration parameters of the system for a set of values for the input parameters.

This formula shows that the linkage must have an even number of links, so we have

See Sunkari and Schmidt [16] for the number of 14- and 16-bar topologies, as well as the number of linkages that have two, three and four degrees-of-freedom.

The planar four-bar linkage is probably the simplest and most common linkage. It is a one degree-of-freedom system that transforms an input crank rotation or slider displacement into an output rotation or slide.

Examples of four-bar linkages are:

Types of four-bar linkages with link-lengths assigned to each link – observe the shortest link S and longest link L of each of these mechanism.

Linkage systems are widely distributed in animals. The most thorough overview of the different types of linkages in animals has been provided by Mees Muller, [19] who also designed a new classification system which is especially well suited for biological systems. A well-known example is the cruciate ligaments of the knee.

An important difference between biological and engineering linkages is that revolving bars are rare in biology and that usually only a small range of the theoretically possible is possible due to additional mechanical constraints (especially the necessity to deliver blood). [20] Biological linkages frequently are compliant. Often one or more bars are formed by ligaments, and often the linkages are three-dimensional. Coupled linkage systems are known, as well as five-, six-, and even seven-bar linkages. [19] Four-bar linkages are by far the most common though.

Linkages can be found in joints, such as the knee of tetrapods, the hock of sheep, and the cranial mechanism of birds and reptiles. The latter is responsible for the upward motion of the upper bill in many birds.

Linkage mechanisms are especially frequent and manifold in the head of bony fishes, such as wrasses, which have evolved many specialized feeding mechanisms. Especially advanced are the linkage mechanisms of jaw protrusion. For suction feeding a system of linked four-bar linkages is responsible for the coordinated opening of the mouth and 3-D expansion of the buccal cavity. Other linkages are responsible for protrusion of the premaxilla.

Linkages are also present as locking mechanisms, such as in the knee of the horse, which enables the animal to sleep standing, without active muscle contraction. In pivot feeding, used by certain bony fishes, a four-bar linkage at first locks the head in a ventrally bent position by the alignment of two bars. The release of the locking mechanism jets the head up and moves the mouth toward the prey within 5–10 ms.