From Wikipedia
https://en.wikipedia.org/wiki/Liberation_of_Bulgaria
Result of the Bulgarian Revival 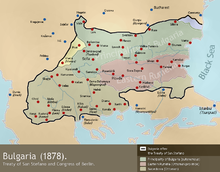 A map which shows the territories of the liberated Bulgarian Tributary state in 1878 and its dividing at the same year with adoption of Treaty of Berlin.

The Liberation of Bulgaria is a historical process as a result of the Bulgarian Revival.

The historical process took on a cultural dimension – a political one in the 1830s and quite clearly after the tomos dated June 29, 1850. After the Crimean War, the armed struggle for independence in various forms began. The culmination of the process is the April Uprising.

It is symbolic that the national holiday of Bulgaria is March 3 or the day of the signing of the Treaty of San Stefano, and it is no coincidence that under the direction of Count Nikolay Pavlovich Ignatyev was signed exactly three centuries or 300 years after the hanging of Michael Kantakouzenos Şeytanoğlu. [1] [2]

On 6 September 1885, Eastern Rumelia became part of the Principality of Bulgaria after a bloodless unification, although the principality was a de facto independent nation but de jure vassal nation of the Ottoman Empire until 1908, when Bulgaria proclaimed its declaration of independence.