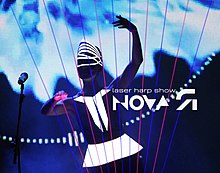 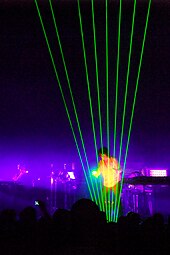 A laser harp is an electronic musical user interface and laser lighting display. It projects several laser beams played by the musician by blocking them to produce sounds, visually reminiscent of a harp. It was popularised by Jean-Michel Jarre, and has been a high-profile feature of almost all his concerts since 1981. The laser harp became famous in Asia by Japanese artist Susumu Hirasawa.

French composer Bernard Szajner applied to patent the laser harp in 1981. [1] It was granted in 1982, meaning that the French patent office had found no evidence of another inventor of the same or similar instrument before him. [1]

However, Australian inventor Geoffrey Rose claims to have taken out a provisional patent with the United Kingdom's patent office in 1975–76, and his invention may have been shown and used as early as 1976. [2] [3] [4]

The framed style, which is often created to look like a harp with strings, uses an array of photodiodes or photoresistors inside the upper or lower part of the frame to detect blocking of the laser beams. The framed harp built by Geoffrey Rose in 1975–76 was an octagonal shape with a 5×5 matrix of laser beams. [2] The lasers can be mounted on the 'neck' or upper side of the harp, shining down, or on the body, shining up. Typically, the lasers used are very low-powered 5 mW red or green lasers, which are considered safe for public interaction by the FDA. Any number of laser beams can be arranged in this type of laser harp, from as few as one or two, up to 32 or more, depending on the capacity of the MIDI controller(s) and software being used. This style of Laser Harp can be created in any size, from a lap sized harp to a room sized installation, or larger, like the installations seen at Burning Man. In this design, only an analog trigger is created by the breaking of the beam (and the DC circuit made by the beam shining on the optic sensor), which is sufficient to trigger any number of events (musical or otherwise) as determined by the data analyzer or software in question. In the MIDI controller, this analog DC current interruption is converted to a digital signal, which is then used to trigger many possible events or actions. Some software comes equipped with full wave file editors and synthesizers, and can also trigger video and still imagery via projection units.

This style of laser harp is generally built using a single laser, splitting its beam into an array of beams in parallel or fan arrangement. Playing the actual sound is usually handled by connecting the laser harp to a synthesizer, sampler or computer.

This frameless design is more elaborate than the framed style, relying on reflecting the light back to a single photodiode. The fan of laser beams is actually a single beam scanned into a fan pattern. By matching the timing of the reflected beam, the instrument can determine which beam the player is blocking and sound the corresponding note. Alternative designs use multiple lasers. In these designs, each laser can be independently controlled (pulsed on and off) to simulate playback of prerecorded notes.

Several techniques generate more control data, such as a continuous range of values like those in typical MIDI controllers:

The first of these is relatively inexpensive and straightforward to implement, and can use the same micro-controller that drives the lasers and reads the detectors.

The advantage of a dedicated sensor mechanism is that the instrument can be self-contained, as opposed to requiring a computer to control it with input from an ILDA interface and USB camera. The PC-based approach, however, offers more flexibility and can be constructed with mostly off-the-shelf hardware.

Unframed laser harps benefit from the use of higher-power lasers, as they facilitate easier detection by the sensor system. As the sensor is exposed to all ambient light, it can be swamped by stage lighting behind the artist if the sensitivity is too high. To avoid this, the system can use ambient light sensors to reject ambient light. The player may use white or light-coloured gloves to improve performance by scattering more light off the player's hands to provide the sensor with a higher signal-to-noise ratio with respect to ambient light. Furthermore, the gloves protect the player's skin from potentially hazardous laser radiation and give audiences a more visual impression of the instrument.

The image recognition laser harp is also an unframed design, but uses a high-speed USB camera connected to a laptop computer, instead of a photodiode to detect the reflected light from the hand breaking the beam. The digital picture is analyzed by the computer software to determine which beam is broken and send the appropriate MIDI signal back to the synthesizer, which is responsible for creating the sound. The computer also controls the laser projector via an ILDA USB laser controller.

In 2008, Maurizio Carelli, an Italian software and electronic engineer, had the idea of a bicolour (red and green) laser harp. This device features a configurable full octave with both diatonic and chromatic notes. Green beams indicate diatonic notes and red ones mark chromatic notes. [5]

Beams at the laser harp controller

In 2005, a free multicolour laser harp project using an ILDA interface was shared on laser discussion boards and revealed the same year at a German meeting. [6]

Since the project grows and a software came up to control the hardware. Now it's possible to get colour change, patches with visual effects, vibrating beams, and even sound modulation with hand height

Producing laser beams that are visible in normal air requires a relatively powerful laser, at least 20  mW, depending on the laser type and instrument design. However, it takes a considerably more powerful laser to yield visually spectacular results, generally 500 mW or more. In any case, class IIIb or IV lasers are usually necessary, introducing a significant risk of skin and eye damage unless the player wears gloves and protective glasses.

Use in Jean-Michel Jarre concerts 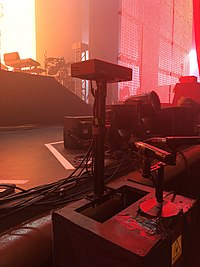 Jean-Michel Jarre uses the laser harp in almost every concert, with the exception of Aero and the Oxygene 30th Anniversary Tour. He almost always uses it in the third part of Second Rendez-Vous, but has also used it for tracks like Third Rendez-Vous, Chronologie 3, Calypso 2, Oxygene 7 and Time Machine. The characteristic sound of the laser harp in Jean-Michel Jarre's performances comes from a factory preset on the Elka Synthex synthesizer. [7] [8]

During Jarre's 2009 In-Doors Arena Tour, he commented on his blog that he "should make a few intentional mistakes for people to really understand that it is live". [9] Later the same day, at a concert in Helsinki, the harp "suddenly froze in Rendez Vous 2 for unknown reasons". [10] [11]