La Vega (Spanish pronunciation:  [la ˈβeɣa]) is a province of the Dominican Republic. Until 1992 it included what is now Monseñor Nouel province.

The first settlement made by Christopher Columbus in the area was on December 8, 1494. Its initial economic development was based on gold mining. In the early 16th century, it had a cathedral, plus two convents, the fort, a building that functioned as a hospital, and administration buildings. In La Vega the first coin was minted and the first merchants settled. It is also the site of one of the mayor battles between Spaniards and indigenous people. [1] 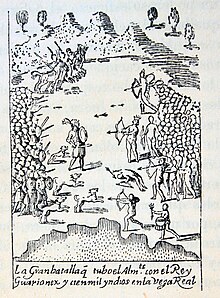 On December 2, 1562, the city was destroyed by an earthquake, being moved to the southern bank of the Camú River. The second foundation of the city corresponds to its current location and it is believed that it took place between the years 1562 and 1563. [2]

During the 17th and 18th centuries the area suffered a decline. By the first decades of the 1700s, the city of La Vega had a population that approached only 3,000 people. The City was reestablished again on March 13, 1813, when the island, after having spent some years under the French rule, was once again under the power of the Spanish Crown, until the unification of Hispaniola in 1822. During this time the progress was slow and scarce. On May 7, 1842, the city was once again struck down by an earthquake, which destroyed its main buildings, such as the Government Palace and the Church. [1]

In the days of National Independence, the city of La Vega joined the cause of freedom with soldiers. On March 4, 1844, La Vega formalized its declaration in favor of independence, and that same day it became the first town in the country to raise the tricolor flag. Commerce, agriculture and industry gained new momentum with the immigrants from Santo Domingo, Santiago, Moca and other places. The first theater in the country, bearing the same name, was also built.

An event that strengthened the economic development of the area was the inauguration of the railway between the port of Las Cañitas (Sánchez) and the city of La Vega, the product of the efforts of the worthy Gregorio Rivas. The transport by this means of fruits and merchandise led to new living conditions. In 1915 the city received the name of a cultured city, due to its dedication to art and culture. In the place of the ruins of the first city, there is an archaeological park and a museum. Over the years, a town called Pueblo Viejo has emerged, in honor of the first place where the city existed. 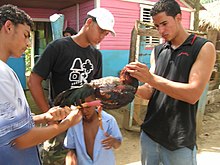 The province as of June 20, 2006 is divided into the following municipalities ( municipios) and municipal districts (distrito municipal – D.M.) within them: [3]