The name Kirkwall comes from the Norse name Kirkjuvágr (Church Bay), which later changed to Kirkvoe, Kirkwaa and Kirkwall. Kirkwall was formerly the site of an ancient Norse town founded approximately 1000 years ago. Today, it is a transport hub with ferries to many locations. [3]

The town was first mentioned in Orkneyinga saga in the year 1046, when it was recorded as the residence of Rögnvald Brusason, the Earl of Orkney, who was killed by his uncle Thorfinn the Mighty. In 1486, King James III of Scotland elevated Kirkwall to the status of a royal burgh. On the western edge of the town, surrounded by Hatston Industrial Estate, there is a prehistoric monument, known as the “Grain Earth House” (see Historic Scotland). It is a short, low, stone-walled passage, deep underground, leading to a small pillared chamber. This kind of earth house (or “ souterrain”) is characteristic of the Northern Isles (although the Grain Earth House is unusually deep below ground). It was originally connected to a surface dwelling, which has since disappeared. The purpose of these Iron Age structures remains unknown. Further west, towards Grimbister, there is a similar structure, known as Rennibister Earth House.

Kirkwall is the administrative centre of Orkney, and the site of the headquarters of both Orkney Islands Council and NHS Orkney.

From 1708 to 1918, Kirkwall was a parliamentary burgh, and was combined with Dingwall, Dornoch, Tain and Wick to form the Northern Burghs constituency of the House of Commons of the Parliament of Great Britain (1708–1801) and then of the Parliament of the United Kingdom (1801–1918). ( Cromarty was added to this constituency in 1832.) The constituency was a district of burghs known as the Tain Burghs until 1832, and then as the Wick Burghs. It was represented by one Member of Parliament (MP) until 1918, when the constituency was abolished and Kirkwall was merged politically into the county constituency of Orkney and Shetland. Modern roadsigns still say "The City and Royal Burgh of Kirkwall", even though Kirkwall is not technically a city. (See city status in the United Kingdom.)

In the 1784–85 term, the well-known outspoken Liberal Charles James Fox represented Tain in the British Parliament. His political opponents fiercely objected to his having been elected from his usual constituency, Westminster; the unlikely resolution of this dispute was that Fox was made a burgess of Kirkwall.

Kirkwall is 130 miles (210 kilometres) north of Aberdeen and 528 mi (850 km) north of London. It is situated on the northern coast of Mainland Orkney with its harbours in the bay of Kirkwall to the north, and with Scapa Flow 1.4 mi (2.3 km) to the south. Its parish, St Ola, forms the isthmus between Firth and Holm. It is the most populous island settlement in Scotland.

Kirkwall has an oceanic climate ( Cfb), with a strong maritime influence on its temperature. As a result, it is generally cooler than the rest of the UK in the summer (except that tends to be warmer than Shetland, being closer to mainland Scotland). [4] Temperatures above 20 °C (68 °F) are rather infrequent. Orkney’s winters are damp, chilly and windy, but are very mild for their latitude, with infrequent snowfall, due to the Gulf Stream passing to its west, which enables sea-surface temperatures to remain stable. As a result, its winter temperatures are typical of those across Britain in spite of its high latitude. However, the high latitude of Kirkwall means there is much less daylight between the solstices. Thus, in summer, the sun’s warmth is too weak to warm Kirkwall up much. This is different from nearby larger landmasses to the east of Orkney at similar latitudes, such as those in the Baltic Sea region, where even coastal locations average up to 7 °C (13 °F) warmer than Kirkwall during the day in July. Because Kirkwall lacks the warm air that would enable convection, thunderstorms and heavy rainfall are rare occurrences in summers, which tend to be dry as a result.

Due to its mild winters, Orkney’s annual average temperature is warmer than that of coastal locations at the same latitude such as Stockholm, which has an oceanic climate. The mild climate combined with a relatively sheltered location enables trees to grow in the urban area on what is an otherwise nearly treeless island.

Kirkwall harbour with nearly 1 kilometre (0.6 mi) of quay edge is the second commercial hub for Orkney after Hatston. There is a Marina, and support for fishing and dive vessels. [10] After extensive work on harbour facilities, the town has become a popular cruise ship stop, with several ships arriving each week in the season. This has added to the prosperity of the town and allowed a thriving sector of independently owned shops. Each year now, 140 cruise ships visit Kirkwall and Stromness. [11]

Weaving in Orkney took place from Viking times, with John Sclater & Co involved in Tweed production in Kirkwall in the 1970s. They used the brand names Norsaga and Jarltex. [12] [13] 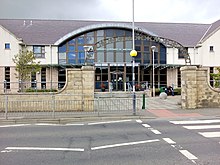 The Orkney Library and Archive is in Kirkwall. Kirkwall also has the most northerly of the world's Carnegie libraries, which was opened by Andrew Carnegie and his wife in 1909. The building survives, although the library has since moved to a larger building on Junction Road.

The town has two museums, the larger being Tankerness House Museum, which contains items of local historical interest within one of Scotland's best-preserved 16th-century town-houses. It is a Category A listed building Scotland. The prehistoric, Pictish and Viking collections are of international importance. The other museum is the Orkney Wireless Museum, dealing with the history of radio and recorded sound.

There is a Royal National Lifeboat Institution lifeboat station. [14]

One of the major annual events in the town is the Ba Game, held each Christmas Day and New Year's Day between the Uppies and the Doonies, each team representing one half of the town.

Media and the arts

The composer Peter Maxwell Davies was among a group which founded the annual St Magnus International Festival which is centred on Kirkwall each midsummer. [15]

Orkney Theatre, a 384-seat venue, was opened in 2014 next to Kirkwall Grammar School in The Meadows. It has an orchestra pit which can be made available for use by removing two rows of seats. [16]

Kirkwall Harbour can be seen in The Highlands and Islands – A Royal Tour, a 1973 documentary about Prince Charles' visit to the Highlands and Islands, directed by Oscar Marzaroli. [17] Scottish film-maker Margaret Tait was born in Kirkwall, and many of her films (in particular the Aspects of Kirkwall series) are set there.

Long-running The Simpsons character Groundskeeper Willie was born in Kirkwall. [18] 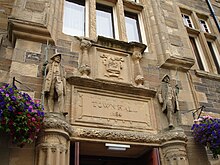 Kirkwall has many 17th–18th-century houses and other structures in the local vernacular style. Kirkwall also once had a medieval castle, which was destroyed in the 17th century.

Kirkwall is a port with ferry services to Aberdeen and Lerwick, as well as the principal north islands in the group. Hatson pier, the main ferry terminal, is some 2 mi (3 km) outside the town centre. [19]

Kirkwall Airport, the main airport for Orkney, is 2+1⁄2 mi (4 km) southeast of the town. There are no passenger rail services in Kirkwall, the nearby railways having been industrial or military. [20] [21]

Kirkwall Grammar School has been established since circa 1200. [22] The current school building was opened in 2014. [23]

The Orkney College main campus is situated in Kirkwall, in a purpose-built building that opened in 2000.

Robert Gordon University (RGU) in Aberdeen started a research project in 2018 into the history of Orkney Tweed as part of a wider Orkney Project which is using the archives in Kirkwall. [24]

The ' Kirk' of Kirkwall was not the Cathedral (which was originally at Birsay), but the 11th-century church of Saint Olaf of Norway. One late medieval doorway survives from this church, and an aumbry from the original church survives within the late 19th-century structure of the present-day Saint Olaf's Church ( Episcopal) in the town's Dundas Crescent. At the heart of the town stands St. Magnus Cathedral, which was founded in memory of Saint Magnus Erlendsson, Earl of Orkney 1108–1117 by Earl (later Saint) Rögnvald Kali. Next to the Cathedral are the ruins of the former Bishop's Palace and Earl's Palace.

Kirkwall is twinned with: