From Wikipedia
https://en.wikipedia.org/wiki/Kevin_Kelly_(editor)
American magazine editor
This article is about the founding executive editor of Wired magazine. For other people with the same name, see Kevin Kelly. 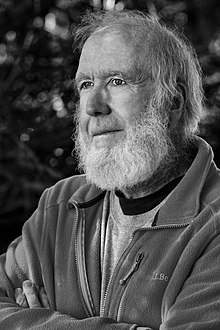 Kevin Kelly (born 1952) is the founding executive editor of Wired magazine, and a former editor/publisher of the Whole Earth Review. He has also been a writer, photographer, conservationist, and student of Asian and digital culture.

Kelly was born in Pennsylvania in 1952, [1] and graduated from Westfield High School, Westfield, New Jersey, in 1970. [2] Through his father, an executive for Time who used systems analysis in his work, Kelly developed an early interest in cybernetics. [3] He attended the University of Rhode Island for one year, studying geology. [4]

Kelly has traveled extensively, backpacking in Asia. While travelling in the Middle East, he had a conversion experience and became a born-again Christian. [3] He was raised Catholic. [4]

Kelly lives in Pacifica, California, a small coastal town just south of San Francisco. He is married to the biochemist Gia-Miin Fuh and has three children: Kaileen, Ting, and Tywen. [2] He regrets not having a fourth child. [4]

Among Kelly's personal involvements is a campaign to make a full inventory of all living species on earth, an effort also known as the Linnaean enterprise. He is also sequencing his genome and co-organizes the Bay Area Quantified Self Meetup Group. [5]

Kelly began contributing freelance articles to CoEvolution Quarterly in 1980, while living in Athens, Georgia. Around this time he was also editing his own start-up magazine called Walking Journal, and working in an epidemiology laboratory to support himself. [3]

He was hired in 1983 [4] by Whole Earth founder Stewart Brand to edit some of the later editions of the Whole Earth Catalog, the Whole Earth Review, and Signal. With Brand, Kelly helped found the WELL, an influential virtual community. As director of the Point Foundation, he co-sponsored the first Hackers Conference in 1984. [6]

In 1992, Kelly was hired by Louis Rossetto to serve as executive editor of Wired, which was launched in March 1993. Kelly brought to the magazine the cybernetic social vision of the Whole Earth publications and their networked style of editorial work, while also recruiting writers and editors from the WELL. [7] Kelly stepped down as executive editor in 1999; his current job title at Wired is Senior Maverick. [2] Partially due to his reputation as Wired's editor, he is noted as a participant in and an observer of cyberculture.

Kelly's writing has appeared in many other national and international publications such as The New York Times, The Economist, Time, Harper's Magazine, Science, Veneer Magazine, GQ, and Esquire. His photographs have appeared in Life and other American national magazines.[ citation needed]

As well as serving as editor on many publications, Kelly has written many novels surrounding his interest in cybernetics and all things tech. Kelly is known for coining the term The Technium, the accumulation of all technologies and inventions as a working, living system. Much of Kelly's work revolves around technology as a "living organism." He even refers to The Technium as the seventh kingdom of nature, that is self-organizing and autonomous. Kelly's book-length publication, Out of Control: The New Biology of Machines, Social Systems, and the Economic World (1992), presents a view on the mechanisms of complex organization. The central theme of the book is that several fields of contemporary science and philosophy point in the same direction: intelligence is not organized in a centralized structure but much more like a bee-hive of small simple components. Kelly applies this view to bureaucratic organisations, intelligent computers, and to the human brain.

Kelly helped found the All Species Foundation. [8] [9] Kelly was a futurist adviser on the Steven Spielberg directed movie Minority Report. [10]

Kelly has a chapter giving advice in Tim Ferriss' book Tools of Titans. 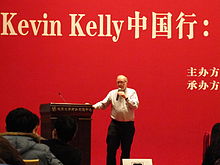