From Wikipedia
https://en.wikipedia.org/wiki/Kangchenjunga
For other uses, see Kangchenjunga (disambiguation).
Third highest mountain in the world

Kangchenjunga and surrounding peaks at sunset from ISS, December 2019

Kangchenjunga, also spelled Kanchenjunga, is the third highest mountain in the world. It rises with an elevation of 8,586 m (28,169 ft) in a section of the Himalayas called Kangchenjunga Himal delimited in the west by the Tamur River, in the north by the Lhonak Chu and Jongsang La, and in the east by the Teesta River. [3] [1] It lies between India and Nepal, with three of the five peaks, namely Main, Central and South, directly on the border, [4] and the peaks West and Kangbachen in Nepal's Taplejung District. [5]

Until 1852, Kangchenjunga was assumed to be the highest mountain in the world, but calculations based on various readings and measurements made by the Great Trigonometrical Survey of India in 1849 came to the conclusion that Mount Everest, known as Peak XV at the time, was the highest. Allowing for further verification of all calculations, it was officially announced in 1856 that Kangchenjunga is the third highest mountain in the world. [6]

Kangchenjunga was first climbed on 25 May 1955 by Joe Brown and George Band, who were part of the 1955 British Kangchenjunga expedition. They stopped short of the summit in accordance with the promise given to the Chogyal that the top of the mountain would remain intact. Every climber or climbing group that has reached the summit has followed this tradition. [7]

Kangchenjunga is the official spelling adopted by Douglas Freshfield, Alexander Mitchell Kellas and the Royal Geographical Society that gives the best indication of the Tibetan pronunciation. Freshfield referred to the spelling used by the Indian Government since the late 19th century. [3] Alternative spellings include Kanchenjunga, Khangchendzonga and Kangchendzönga. [8] [9] [10]

Local Lhopo people believe that the treasures are hidden but reveal themselves to the devout when the world is in peril; the treasures comprise salt, gold, turquoise and precious stones, sacred scriptures, invincible armor or ammunition, grain and medicine. [12] Kangchenjunga's name in the Limbu language is Senjelungma or Seseylungma, and is believed to be an abode of the omnipotent goddess Yuma Sammang.[ citation needed]

The Kangchenjunga landscape is a complex of three distinct ecoregions: the eastern Himalayan broad-leaved and coniferous forests, the Eastern Himalayan alpine shrub and meadows and the Terai-Duar savanna and grasslands. [13] The Kangchenjunga transboundary landscape is shared by Nepal, India, Bhutan and China, and comprises 14 protected areas with a total of 6,032 km2 (2,329 sq mi): [14]

Panorama of the Kangchenjunga massif from Tiger Hill, Darjeeling

The Kangchenjunga Himal section of the Himalayas lies both in Nepal and India and encompasses 16 peaks over 7,000 m (23,000 ft). In the north, it is limited by the Lhonak Chu, Goma Chu, and Jongsang La, and in the east by the Teesta River. The western limit runs from the Jongsang La down the Gingsang and Kangchenjunga glaciers and the rivers of Ghunsa and Tamur. [1] Kanchenjunga rises about 20 km (12 mi) south of the general alignment of the Great Himalayan range about 125 km (78 mi) east-southeast of Mount Everest as the crow flies. South of the southern face of Kanchenjunga runs the 3,000–3,500 m (9,800–11,500 ft) high Singalila Ridge that separates Sikkim from Nepal and northern West Bengal. [15]

Kangchenjunga and its satellite peaks form a huge mountain massif. [16] The massif's five highest peaks are listed in the following table. 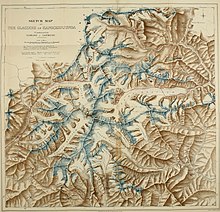 The main ridge of the massif runs from north-northeast to south-southwest and forms a watershed to several rivers. [16] Together with ridges running roughly from east to west they form a giant cross. [3] These ridges contain a host of peaks between 6,000 and 8,586 m (19,685 and 28,169 ft). The northern section includes Yalung Kang, Kangchenjunga Central and South, Kangbachen, Kirat Chuli, and Gimmigela Chuli, and runs up to the Jongsang La. The eastern ridge in Sikkim includes Siniolchu. The southern section runs along the Nepal-Sikkim border and includes Kabru I to III. [1] This ridge extends southwards to the Singalila Ridge. [21] The western ridge culminates in the Kumbhakarna, also known as Jannu. [1]

Four main glaciers radiate from the peak, pointing roughly to the northeast, southeast, northwest, and southwest. The Zemu glacier in the northeast and the Talung glacier in the southeast drain to the Teesta River; the Yalung glacier in the southwest and the Kangchen glacier in the northwest drain to the Arun and Kosi rivers. [22] The glaciers spread over the area above approximately 5,000 m (16,000 ft), and the glacialized area covers about 314 km2 (121 sq mi) in total. [23] There are 120 glaciers in the Kanchenjunga Himal, of which 17 are debris-covered. Between 1958 and 1992, more than half of 57 examined glaciers had retreated, possibly due to rising of air temperature. [24]

Although it is the third highest peak in the world, Kangchenjunga is only ranked 29th by topographic prominence, a measure of a mountain's independent stature. The key col for Kangchenjunga lies at a height of 4,664 metres (15,302 ft), along the watershed boundary between Arun and Brahmaputra rivers in Tibet. [28] It is however, the 4th most prominent peak in the Himalaya, after Everest, and the western and eastern anchors of the Himalaya, Nanga Parbat, and Namcha Barwa, respectively. [29] 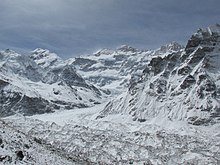 Kanchenjunga-north from base camp in Nepal

There are four climbing routes to reach the summit of Kangchenjunga, three of which are in Nepal from the southwest, northwest, and northeast, and one from northeastern Sikkim in India. To date, the northeastern route from Sikkim has been successfully used only three times. The Indian government has banned expeditions to Kanchenjunga; therefore, this route has been closed since 2000. [30]

Painting of Kanchinjínga as seen from the Singalila Ridge by Hermann Schlagintweit, 1855 [31] 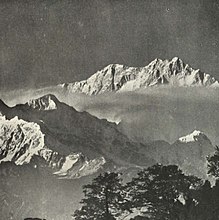 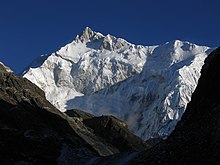 A sign board on the last traversable road to Kangchenjunga 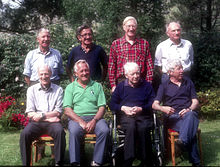 In 1955, Joe Brown and George Band made the first ascent on 25 May, followed by Norman Hardie and Tony Streather on 26 May. The full team also included John Clegg (team doctor), Charles Evans (team leader), John Angelo Jackson, Neil Mather, and Tom Mackinnon. [8] The ascent proved that Aleister Crowley's 1905 route (also investigated by the 1954 reconnaissance) was viable. The route starts on the Yalung Glacier to the southwest of the peak, and climbs the Yalung Face, which is 3,000 metres (10,000 ft) high. The main feature of this face is the "Great Shelf", a large sloping plateau at around 7,500 metres (24,600 ft), covered by a hanging glacier. The route is almost entirely on snow, glacier, and one icefall; the summit ridge itself can involve a small amount of travel on rock. The first ascent expedition made six camps above their base camp, two below the Shelf, two on it, and two above it. They started on 18 April, and everyone was back to base camp by 28 May. [40] Other members of this expedition included John Angelo Jackson and Tom Mackinnon. [41]

Despite improved climbing gear the fatality rate of climbers attempting to summit Kanchenjunga is high. Since the 1990s, more than 20% of people died while climbing Kanchenjunga's main peak. [57] 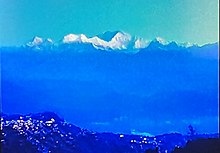 Kanchenjunga from Tiger Hill at dawn 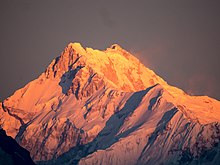 Kanchenjunga as seen from Gangtok, Sikkim

Because of its remote location in Nepal and the difficulty involved in accessing it from India, the Kangchenjunga region is not much explored by trekkers. It has, therefore, retained much of its pristine beauty. In Sikkim too, trekking into the Kangchenjunga region has just recently been permitted. The Goecha La trek is gaining popularity amongst tourists. It goes to the Goecha La Pass, located right in front of the huge southeast face of Kangchenjunga. Another trek to Green Lake Basin has recently[ when?] been opened for trekking. This trek goes to the Northeast side of Kangchenjunga along the famous Zemu Glacier. The film Singalila in the Himalaya is journey around Kangchenjunga.

For generations, there have been legends recounted by the inhabitants of the areas surrounding Kanchenjunga, both in Sikkim and in Nepal, that there is a valley of immortality hidden on its slopes. These stories are well known to both the original inhabitants of the area, the Lepcha people, and Limbu people and those of the Tibetan Buddhist cultural tradition. In Tibetan, this valley is known as Beyul Demoshong. In 1962 a Tibetan Lama by the name of Tulshuk Lingpa led over 300 followers into the high snow slopes of Kanchenjunga to ‘open the way’ to Beyul Demoshong. The story of this expedition is recounted in the 2011 book A Step Away from Paradise. [60] 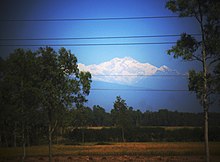 East face of Kangchenjunga, from near the Zemu Glacier, Sikkim 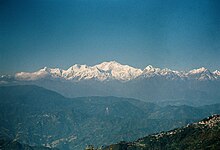 View of Kangchenjunga as seen from Darjeeling

The above Himalayan Journal references were all also reproduced in the "50th Anniversary of the First Ascent of Kangchenjunga" The Himalayan Club, Kolkata Section 2005.