From Wikipedia
(Redirected from Jessadabodindra)
https://en.wikipedia.org/wiki/Jessadabodindra
For the third book in the Rama series, see The Garden of Rama.
King Rama III

Nangklao ( Thai: พระบาทสมเด็จพระนั่งเกล้าเจ้าอยู่หัว) or Rama III (31 March 1788 – 2 April 1851) was the third monarch of Siam under the House of Chakri, ruling from 21 July 1824 to 2 April 1851. He succeeded his father, Rama II, as the King of Siam. His succession was unusual according to the traditions [1] because Nangklao was a son of a concubine rather than that of a queen. His accession was perceived by foreign observers as having usurped the prior claim of Prince Mongkut, who was a legitimate son of Rama II born to a queen, Srisuriyendra. Under the old concept of Thai monarchy, however, a proper king must emulate Maha Sammata in that he must be "elected by the people." [2] Ironically, Prince Mongkut may have later contributed to this misconception, when he feared that his own accession might be perceived by foreign observers as a usurpation. [3]

During Nangklao's reign, the military hegemony of Siam was established by putting down the Laotian Rebellion (1826–1828, in what would come to be called Isan), the Siamese–Vietnamese War (1831–34), and the Siamese-Vietnamese War fought in Cambodia (1841–45). Although his military was defeated twice by the Vietnamese.

King Nangklao was born as Prince Thap ( Thai: ทับ) in 1788 to Prince Isarasundhorn and one of his royal wives Chao Chom Manda Riam, who came from a Muslim noble family from the south. Following Isarasundhorn's coronation (posthumously known as Phutthaloetla Naphalai, or Rama II) in 1809, Prince Kshatriyanuchit ( Mom Men), the surviving son of Taksin, revolted as pretender to the throne. Prince Thap was assigned to suppress the rebellion, which he did. Praised by his father for his competence, Prince Thap was given the Sanskrit-derived title Chetsadabodin, raised to the bureaucratic rank of Kromma Muen, and served his father as Kromma Tha (minister of trade and foreign affairs.) As Kromma Tha, he developed proficiency in foreign trade, and developed an affection for Chinese goods and culture. Temples he later had constructed were characterized by Chinese influence. After a private audience in 1822, Crawfurd wrote of the Prince Krom-chiat that, "he seemed certainly to maintain the character assigned to him in public estimation, of being the most intelligent of all the princes and chiefs of the Siamese Court." The Portuguese Consul stated that the Prince had offered him a large sum of money, if he would translate from the French into the Portuguese language a history of the wars of Napoleon, for the purpose of being rendered into Siamese through the Christian interpreters. [4]

As the prince administered trade affairs, his half-brother Prince Mongkut pursued the way of religion, becoming a monk in 1824. In that year, Phutthaloetla Naphalai died suddenly without having named a successor to viceroy Maha Senanurak, who had died 16 July 1817. According to the traditions of royal succession, the viceroy or uparaja was heir presumptive. If there were none, then an ad hoc senabodi consisting of senior officials present at the death of a king, would elect a successor. [5] Foreign observers accustomed to the concept of an heir apparent expected Prince Mongkut, as the a son of the queen, to ascend to the throne. However, the assembled Senabodi considered Prince Chetsadabodin a more competent choice as he had served the king in Kromma Tha for years. Support came strongly from high-ranking nobility, including Chao Phraya Abhay Pudhorn, the Samuha Nayok, and Dis Bunnag then Minister of Kromma Tha, and other Bunnag family members.

Chetsadabodin accepted the throne and was crowned in 1824. He raised his mother, Riam, to Princess Mother Sri Suralai. He appointed his uncle, Sakdiphonlasep, viceroy on 21 July 1824 – who predeceased the king 1 May 1832, leading to yet another succession crisis. He did not name his reign, but was posthumously awarded the name Nangklao by Mongkut, who had in the interim remained in ecclesiastic status to avoid the intrigues of royal politics. [6]:300 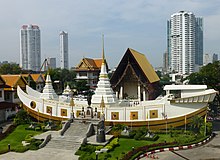 Wat Yannawa was patronised by King Rama III, he ordered the temple enlarged and constructed many new structures within.

The reign of Nangklao (as he was posthumously known) saw the renewal of Western contacts. In 1822, British East India Company agent John Crawfurd's mission to Siam [4] laid the groundwork for a British request for Siamese support in the First Anglo-Burmese War, which broke out in 1824. Nangklao provided fleets and elephants to rush through Burmese forests. He also sent Siamese armies to participate in the invasion of Burma since the British promised Siam the conquered lands. Phraya Chumporn ordered the forced migration of Mergui (a common practice in Southeast Asia regarding the newly-conquered lands), which had been conquered by the British. The British were frustrated at Phraya Chumporn's actions, and hostilities were heightened. Nangklao ordered the Siamese armies to leave to avoid further conflict.

In 1825, Henry Burney arrived to negotiate peace agreements. The Burney Treaty was the first treaty with the West in the Rattanakosin period. Its purpose was to established free trade in Siam and to greatly reduce taxation on foreign trading ships. That it accomplished the objectives is disputed. [7]

In 1833, US President Andrew Jackson's "special agent" and envoy Edmund Roberts, referring often to Crawfurd's account, [6]:pp198ff concluded the Siamese–American Treaty of Amity and Commerce, signed at the Royal City of Sia-Yut'hia (Bangkok) on 20 March, the last of the fourth month of the year 1194 Chula Sakarat. This treaty, with later modifications, is still in force. [8] [9] Dan Beach Bradley, an American physician and prominent Western personality of the time, introduced printing and vaccination.

The three Laotian kingdoms ( Lan Xang in Vientiane, Luang Prabang, and Champasak) became Siamese tributary states after Chao Phraya Maha Kshatriyaseuk (King Rama I, Nangklao's grandfather) had conquered them in 1778. Anouvong, the son of the king of Vientiene, was taken to Bangkok as a captive. He spent nearly thirty years in Siam and joined the Siamese forces in wars with Burma. In 1805, Anouvong returned to Vientiane to be crowned as the king.

In 1824, Phutthaloetla Naphalai died and, in the following year, Siam was dragged into conflicts with the British Empire. [10] Anouvong saw this as an opportunity to wield his power. In 1825, returning from the funeral of Phutthaloetla Naphalai in Bangkok, Anouvong assembled a large force and went on the offensive. After defeating Bangkok-vassal principalities along the way, Anouvong captured Korat, the main defensive stronghold of Siam in the northeast. He forced the city to be evacuated while marching to Saraburi, on approach to the capital, Bangkok. However, the Korat captives rebelled—said to have been at the instigation of Lady Mo, wife of a ruling noble of Korat—although this claim is countered by many historians who say Mo had no heroic role in the events at Tung Samrit, though a contemporary account did mention her action. As Bangkok gathered counterattacking troops, Anouvong withdrew to return to Vientiane.

Nangklao sent his uncle Maha Sakdi Polsep the Front Palace and Sing Singhaseni (at the time styled Phraya Ratchasuphawadi) to defeat the armies of Anouvong in Isan. Anouvong was defeated and fled to Vietnam. The Siamese captured Vientiane and ordered the evacuation of the city.

In 1827, Nangklao ordered the total destruction of Vientiane. Anouvong returned to Laos with Vietnamese forces. Ratchasuphawadi led the Siamese to fight and the engagements occurred at Nong Khai. Anouvong was defeated again and, after an attempt to flee, was captured. Vientiane was razed, extinguishing her 200 year reign, and ceased to be a kingdom. Anouvong was imprisoned in an iron cage in front of the Suthaisawan Hall and died in 1829. [11]

In 1810, internal conflicts between Cambodian princes forced Ang Im and Ang Duong to flee to Bangkok. Otteyraja of Cambodia turned to Gia Long of Vietnam for support against the opposing princes. However, this was perceived by Siam as treacherous as the two countries had fought for centuries for control of Cambodia.

In 1833, the Lê Văn Khôi revolt against Minh Mạng broke out in Vietnam. Lê Văn Khôi, the rebel leader, sought Siamese aid. Nangklao intended to take this opportunity to install a pro-Siamese monarch on the Cambodian throne.

Phraya Ratchasuphawadi, who had been promoted to Chao Phraya Bodindecha, was ordered to capture Saigon. Dis Bunnag, the Minister of Kromma Tha, commanded a fleet to rendezvous with ground forces at Saigon. The two Cambodian princes, Ang Im and Ang Duong, also joined the expedition. Bodindecha took Udongk and the fleet took Bantey Mas. The fleet proceeded to Saigon but was repelled.

Bodindecha then took Phnom Penh and again invaded Vietnam by land in 1842. In 1845, the Vietnamese recaptured Phnom Penh, but Bodindecha was able to defend Udongk. In 1847, prompted by Emperor Thiệu Trị's treatment of Christian missionaries, French forces invaded Vietnam. A cessation of hostilities with Siam was negotiated. Ang Duong was installed as the Cambodian monarch under the equal patronage of both Siam and Vietnam, thus ending the war.

In 1837, Krom Somdet Phra Sri Suralai, mother of Nangklao, died. All officials throughout the kingdom went to Bangkok to attend the funeral. At Syburi ( Kedah of Malaysia now), without the presence of Siamese governors, a nephew of the Sultan of Kedah then staged a revolt. Nangklao then sent Tat Bunnag down south to subjugate the rebellion quickly in 1838. Tat then suggested an autonomous government for Kedah Sultanate. In 1839, Kedah was divided into four autonomous parts.

Nangklao was famous for his Buddhist faith. He fed the poor each day after becoming prince, and released animals every monastery day. More than 50 temples were built and repaired in his reign, including the first Chinese style temple at Rajorasa, the highest stupa at Wat Arun, the Golden Mountain at Wat Sraket, the metal temple at Wat Ratchanadda, and Chetupol Temple or Wat Pho. Wat Pho is the site of the first university in Thailand. 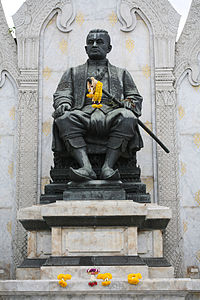 Nangklao died on 2 April 1851 without having named a successor. He had 51 children including sons, [12] but had raised none of his consorts to queen. The throne passed to his half-brother, Prince Mongkut.

Nangklao stated on his deathbed that "Our wars with Burma and Vietnam were over, only the threats of the Westerners was left to us. We should study their innovations for our own benefits but not to the degree of obsession or worship." This vision coincided with Western intervention in Siam in the reign of Mongkut. He was able to predict, but not live to see the neighboring kingdoms of Burma and Vietnam fall to European colonial rule.

During his reign, trade between Siam and China became lucrative. The king kept his profits in red purses beside his bed, subsequently this money was known as "red purse money". Nangklao stipulated that the red purse money that he had earned through his business acumen should be set aside as the state's emergency fund for the future "so that Siam would be able to buy the land back" if it fell into a squabble with a foreign power. In the reign of his nephew Chulalongkorn, Siam indeed had to pay reparations to France for the 1893 Paknam incident during the Franco–Siamese War), and funding in part came from Nangklao's red purse money.