Jermaine La Juane Jackson (born December 11, 1954) is an American singer, songwriter, bassist, and member of the Jackson family. In The Jackson Five with four of his brothers from 1964 to 1975, he was the second vocalist after his brother Michael and played bass guitar, and since 1983 has rejoined their successors, The Jacksons.

Jermaine sang the lead on some of The Jackson Five's biggest hits and featured in " I'll Be There" and " I Want You Back" amongst others. When the four others left and had to reform as The Jacksons, Jermaine, who had just married Motown founder Berry Gordy's daughter Hazel, stayed in Motown and was replaced by his youngest brother, Randy. Jermaine had a solo career concurrent with his brother Michael's and some top-30 hits until the 1980s, produced and recorded duets with Whitney Houston at her debut in 1985, and was a producer for the band Switch. After seven years he rejoined The Jacksons and remained throughout their various breakups and reunions.

Jackson was born December 11, 1954 at St Mary's Mercy Hospital in Gary, Indiana, [2] after his brother Tito Jackson. [3] He is the fourth child born to Joseph and Katherine Jackson. [3] His siblings are Rebbie, Jackie, Tito, La Toya, Marlon, Brandon (died shortly after birth in 1957), Michael, Randy, and Janet. [4] His father Joseph had musical aspirations, playing guitar with his brother's band, The Falcons, and Katherine was a passionate pianist and singer, [3] but their large family and lack of money ended their dreams, with Katherine becoming a housewife and Joseph a steel worker at nearby Inland Steel Company in East Chicago, Indiana, where they lived before moving to Gary in 1950. [4] While his father worked long hours as a crane operator, Jermaine and his brothers, Tito and Jackie, secretly practiced their own songs using their father's guitar. [3] Jermaine became the original lead singer of the Jackson Brothers—an earlier incarnation of The Jackson Five until 1966, when younger brother Michael began singing lead. [5] Jermaine would continue to provide some leads over the years. [5] Jermaine graduated from Birmingham High School in Van Nuys, Los Angeles, California, in 1973. [6] 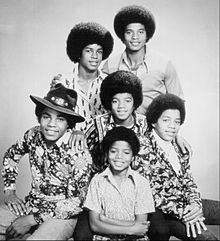 Jermaine and his brothers first signed as The Jackson Five with Gordon Keith of Steeltown Records in November 1967, and their first single " Big Boy", was released on January 31, 1968. [7] After the group recorded three more songs with the Steeltown label (on two records) they were signed with Berry Gordy of Motown Records in 1969. [5] As the co-lead singer of The Jackson 5 after his brother Michael, Jermaine sang notable parts of " I Want You Back", " ABC", " I'll Be There", " The Love You Save", " Dancing Machine", and many other Jackson 5 songs. [5] Jermaine performed as part of the group for six years. [3] Not feeling that they were being paid fair royalties by Motown Records for their success as well as their desire for creative control, the Jackson 5 decided to leave the label and sign with Epic Records in 1975. [8] However, Jermaine decided to stay with Motown Records, citing loyalty to the company as the reason. Others argue that Jermaine's marriage to Motown founder Berry Gordy's daughter Hazel, whom he married in 1973, was a deciding factor. [3] Jermaine split from the Jackson Five to start a solo career at Motown, and was replaced by his brother Randy Jackson. [3] Unbeknownst to the group, Gordy had trademarked the name The Jackson Five and did not allow the group to continue using the name when they left the label. [3] Once signed with Epic, the group became known simply as The Jacksons. In 1983, Gordy asked the group to perform at the Motown 25: Yesterday, Today, Forever television special. [9] After the success of the broadcast, Jermaine finally rejoined the band to record the album Victory which featured all six brothers on the Jackson's album cover. [9] Jermaine also participated in the band's Victory Tour. [9] He stayed with the group for their final album, 2300 Jackson Street, in 1989. [3] Jermaine performs the song If You'd Only Believe, from their 2300 Jackson Street album, on March 15, 1993, with his brothers Jackie, Tito and Randy, on the stage of the Grand Théâtre de Genève for the evening of the Nations. [10] He also performed this song alone, on January 14, 1990 in Atlanta, in tribute to Martin Luther King, during King Week 90 '. [11] In 2001, he reunited with his brothers to perform for the Michael Jackson 30th Anniversary Special. [12]

Jackson is proficient on the electric guitar and is a talented bass guitar player. [3] At an early age, he performed the parts of legendary bass player James Jamerson and others when the Five performed live. [3] His main instrument was a Gibson EB-3. [17] Jermaine also composed and produced for other artists, such as Switch and he produced and sang duets on Whitney Houston's debut album for Arista Records. [3] Jackson is featured on the Switch track "Tahiti Hut" released in 2019, recorded during the Reaching For Tomorrow sessions.

Jackson was the first housemate to enter the Celebrity Big Brother UK house in 2007. [3] After leaving Big Brother, Jackson did several interviews on UK television explaining why and how he took his peaceful and mediating stance in the Big Brother house. He also spoke about the Jackson Five reuniting for a performance. [18] Jackson was part of the second season of the CMT reality show Gone Country. [19] On the premiere episode of season three of the ABC reality show Celebrity Wife Swap [20] on April 15, 2014, Jermaine Jackson and his wife Halima swapped places with Daniel Baldwin and his on-again, off-again girlfriend Isabella Hofmann. In the episode, Jackson refused to comply with Isabella's request that he put some of his clothing in storage. He also refused to provide a status report to the producers after the swap was completed. [21] [22] 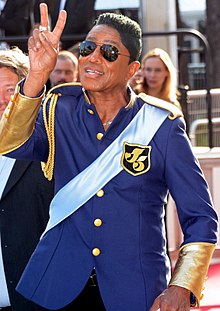 In April 2007, Jackson returned to the UK to take part in a one-off special of ITV's Challenge Anneka. On the same trip, he appeared in Glasgow with British Prime Minister Gordon Brown, speaking in support of Searchlight magazine's anti racism campaign, the Daily Mirror "Hope Not Hate bus". [23] On November 23, 2007, Jackson appeared on Katie & Peter: Unleashed and again talked of a reunion with his brothers on a tour the following year. In 2008, Jackson flew to Australia to be a guest judge and mentor for the top-five Michael Jackson night on Australian Idol. In March 2008, Jackson was the guest of honor at the Muslim Writers Awards in Birmingham. Jackson attended the memorial service for his brother Michael on July 7, 2009, at the Staples Center in Los Angeles. [24] He acted as a pallbearer, and performed the song "Smile" by Charlie Chaplin, which was believed to be his brother's favorite song, in tribute. [25] In 2009, following the death of his brother Michael, Jermaine appeared on the A&E television series The Jacksons: A Family Dynasty, documenting what was supposed to be a 40th-anniversary reunion between Jermaine and his brothers. [26] The series lasted one season and Jermaine, along with his three surviving brothers, was listed as an executive producer. [26] In October 2010, Jermaine played a concert at the Planet Hollywood hotel and casino in Las Vegas, naming it "40 Years of Jackson Music" and dedicating the concert to Michael. [27] He wrote the memoir You Are Not Alone: Michael Through a Brother's Eyes. [28]

In a 2012 interview with Luka Neskovic, for The Huffington Post, Jackson said that his brother planned a reunion with him: "... the plan was to do some shows with the brothers, as well, after he finished his commitment with the "This Is It", and we probably gonna do some songs with him on the "This Is It" tour". [29] In October 2012, Jackson released I Wish You Love, his first solo album in 21 years, consisting mostly of jazz covers. [30] The album was arranged and produced by French opera singer David Serero, who recorded a duet on "Autumn Leaves" with Jermaine, and was released by David Serero Productions. [31] They both performed You Are Not Alone: The Musical, written, directed and produced by Serero, in France in January 2013. The following year, You Are Not Alone: The Musical Live was released on video and audio. [32] [33]

On January 7, 2016, Jermaine and his brothers performed at the Planet Hollywood hotel and casino in Las Vegas once again, at a concert event, naming it "Heal the World: A Tribute to Michael Jackson". A big-name roster of music stars performed the music of the King of Pop at the concert. [34]

Jackson was in a relationship with Margaret Maldonado from 1986 until 1993. They have two sons:

He began a relationship with Alejandra Genevieve Oaziaza while she was dating his younger brother Randy, with whom she had a daughter and a son. He married Oaziaza on March 18, 1995, and the marriage lasted until May 19, 2003. They have two sons:

In January 2004, Jackson met Halima Rashid while in line at Starbucks. [3] In March 2004, he proposed to her and five months later, they were married in a mosque in Los Angeles. [38] Rashid was arrested on November 28, 2015 in Los Angeles for alleged domestic violence. [39] Rashid filed a petition for divorce on June 21, 2016, citing irreconcilable differences. [40]

Jackson, like the rest of his family, was raised as a Jehovah's Witness. In 1989, he converted to Islam after a trip to Bahrain in which he was impressed by the local children's devotion to their religion. [41]

Jermaine supported his brother, Michael, during the 2005 child-abuse trial. [42] He came to Michael's defense on CNN's Larry King Live and appeared with him in court on many occasions. [43] On June 25, 2009, Jermaine held a press conference at Ronald Reagan UCLA Medical Center and broke the news of Michael Jackson's death to the media. [44]

Jermaine is a supporter of the English football team Sheffield Wednesday. [45]