From Wikipedia
https://en.wikipedia.org/wiki/Jan_Baptist_van_Helmont
Chemist, physiologist, and physician from the Spanish Low Countries

Jan Baptist van Helmont ( /ˈhɛlmɒnt/; [3] Dutch:  [ˈɦɛlmɔnt]; 12 January 1580 – 30 December 1644) was a chemist, physiologist, and physician from the Spanish Netherlands. He worked during the years just after Paracelsus and the rise of iatrochemistry, and is sometimes considered to be "the founder of pneumatic chemistry". [4] Van Helmont is remembered today largely for his ideas on spontaneous generation, his 5-year willow tree experiment, and his introduction of the word " gas" (from the Greek word chaos) into the vocabulary of science.

Jan Baptist van Helmont was the youngest of five children of Maria (van) Stassaert and Christiaen van Helmont, a public prosecutor and Brussels council member, who had married in the Sint-Goedele church in 1567. [5] He was educated at Leuven, and after ranging restlessly from one science to another and finding satisfaction in none, turned to medicine. He interrupted his studies, and for a few years he traveled through Switzerland, Italy, France, Germany, and England.

Returning to his own country, van Helmont obtained a medical degree in 1599. [6] He practiced at Antwerp at the time of the great plague in 1605, after which he wrote a book titled De Peste [7] (On Plague), which was reviewed by Newton in 1667. [8] In 1609 he finally obtained his doctoral degree in medicine. The same year he married Margaret van Ranst, who was of a wealthy noble family. Van Helmont and Margaret lived in Vilvoorde, near Brussels, and had six or seven children. [5] The inheritance of his wife enabled him to retire early from his medical practice and occupy himself with chemical experiments until his death on 30 December 1644. 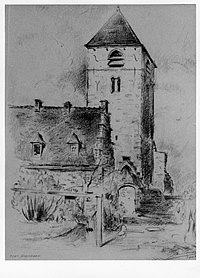 The Roman tower of the old church in Neder-Over-Heembeek and house where van Helmont performed an alchemical transmutation. Drawing by Leon Van Dievoet, 1963. 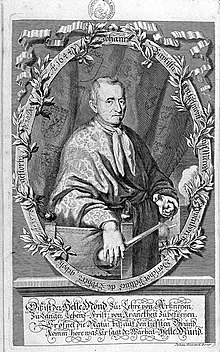 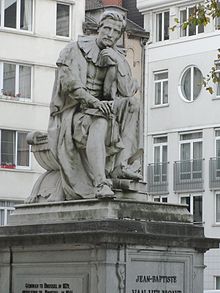 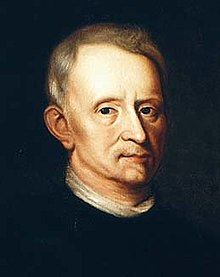 Portrait of van Helmont by Mary Beale, c.1674, misidentified for a time as Robert Hooke

Van Helmont is regarded as the founder of pneumatic chemistry, [4] as he was the first to understand that there are gases distinct in kind from atmospheric air and furthermore invented the word " gas". [9] He perceived that his "gas sylvestre" ( carbon dioxide) given off by burning charcoal, was the same as that produced by fermenting must, a gas which sometimes renders the air of caves unbreathable. For Van Helmont, air and water were the two primitive elements. Fire he explicitly denied to be an element, and earth is not one because it can be reduced to water.

On the one hand, Van Helmont was a disciple of the mystic and alchemist, Paracelsus, though he scornfully repudiated the errors of most contemporary authorities, including Paracelsus. On the other hand, he engaged in the new learning based on experimentation that was producing men like William Harvey, Galileo Galilei and Francis Bacon. Van Helmont was a careful observer of nature; his analysis of data gathered in his experiments suggests that he had a concept of the conservation of mass. He was an early experimenter in seeking to determine how plants gain mass.

Helmont's experiment on a willow tree has been considered among the earliest quantitative studies on plant nutrition and growth and as a milestone in the history of biology. The experiment was only published posthumously in Ortus Medicinae (1648) and may have been inspired by Nicholas of Cusa who wrote on the same idea in De staticis experimentis (1450). Helmont grew a willow tree and measured the amount of soil, the weight of the tree and the water he added. After five years the plant had gained about 164 lbs (74 kg). Since the amount of soil was nearly the same as it had been when he started his experiment (it lost only 57 grams), he deduced that the tree's weight gain had come entirely from water. [10] [11] [12] [13]

Although a faithful Catholic, he incurred the suspicion of the Church by his tract De magnetica vulnerum curatione (1621), against Jean Roberti, which was thought to derogate from some of the miracles. His works were collected and edited by his son Franciscus Mercurius van Helmont and published by Lodewijk Elzevir in Amsterdam as Ortus medicinae, vel opera et opuscula omnia ("The Origin of Medicine, or Complete Works") in 1648. [9] [14] Ortus medicinae was based on, but not restricted to, the material of Dageraad ofte Nieuwe Opkomst der Geneeskunst ("Daybreak, or the New Rise of Medicine"), which was published in 1644 in Van Helmont's native Dutch. His son Frans's writings, Cabbalah Denudata (1677) and Opuscula philosophica (1690) are a mixture of theosophy, mysticism and alchemy.

Van Helmont described the archeus as "aura vitalis seminum, vitae directrix" ("The chief Workman [Archeus] consists of the conjoyning of the vitall air, as of the matter, with the seminal likeness, which is the more inward spiritual kernel, containing the fruitfulness of the Seed; but the visible Seed is onely the husk of this."). [15]

In addition to the archeus, van Helmont believed in other governing agencies resembling the archeus which were not always clearly distinguished from it. From these he invented the term blas (motion), defined as the "vis motus tam alterivi quam localis" ("twofold motion, to wit, locall, and alterative"), that is, natural motion and motion that can be altered or voluntary. Of blas there were several kinds, e.g. blas humanum (blas of humans), blas of stars and blas meteoron (blas of meteors); of meteors he said "constare gas materiâ et blas efficiente" ("Meteors do consist of their matter Gas, and their efficient cause Blas, as well the Motive, as the altering"). [15]

Van Helmont "had frequent visions throughout his life and laid great stress upon them". [16] His choice of a medical profession has been attributed to a conversation with the angel Raphael., [17] and some of his writings described imagination as a celestial, and possibly magical, force. [18] Though Van Helmont was skeptical of specific mystical theories and practices, he refused to discount magical forces as explanations for certain natural phenomena. This stance, reflected in a 1621 paper on sympathetic principles, [19] may have contributed to his prosecution and subsequent house arrest.

Van Helmont wrote extensively on the subject of digestion. In Oriatrike or Physick Refined (1662, an English translation of Ortus medicinae), van Helmont considered earlier ideas on the subject, such as food being digested through the body's internal heat. But if that were so, he asked, how could cold-blooded animals live? His own opinion was that digestion was aided by a chemical reagent, or "ferment", within the body, such as inside the stomach. Harré suggests that van Helmont's theory was "very near to our modern concept of an enzyme". [20]

In 2003, the historian Lisa Jardine proposed that a portrait held in the collections of the Natural History Museum, London, traditionally identified as John Ray, might represent Robert Hooke. [22] Jardine's hypothesis was subsequently disproved by William Jensen of the University of Cincinnati [23] and by the German researcher Andreas Pechtl of Johannes Gutenberg University of Mainz, who showed that the portrait in fact depicts van Helmont.