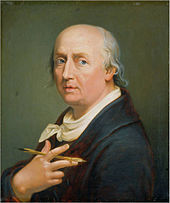 Johann Heinrich Wilhelm Tischbein, known as the Goethe Tischbein (15 February 1751 in Haina – 26 February 1829 in Eutin), was a German painter from the Tischbein family of artists. [1]

His father, Johann Conrad (1712–1778), was the carpenter for the convent in Haina. He began his artistic studies with his uncle, Johann Jacob Tischbein in Hamburg. From 1772 to 1773, he travelled in Holland, studying the Old Masters. After 1777, he established himself as a portrait painter in Berlin and became a member of the Masonic Lodge. [2]

He was able to visit Rome in 1779 and continue his studies, thanks to a stipend from the Kunsthochschule Kassel. During this time, his style progressed from Rococo to Classicism. When he ran out of money in 1781, he settled in Zurich.

In 1783, he was able to return to Rome with a grant from Duke Ernest II, obtained upon the recommendation of Johann Wolfgang von Goethe, to whom he had been introduced by Johann Kaspar Lavater. He remained in Italy until 1799 and became friends with Goethe, travelling with him to Naples in 1787. [3] During his last ten years there, he was director of the Accademia di Belle Arti di Napoli. He left following the French occupation, when the anti-royalist Parthenopean Republic was established.

After 1808, he worked for Grand Duke Peter I. From then until his death, he was a resident of Eutin. He spent several years after 1810 writing his autobiography, Aus meinem Leben. It was not published until 1861 and has not been reissued since.

His son, Peter Friedrich Ludwig Tischbein, was a noted forester and naturalist.