From Wikipedia
https://en.wikipedia.org/wiki/Instrument_of_Accession
Treaty for princely states to join India or Pakistan 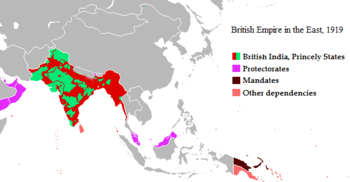 The British Empire in the East, 1919, showing the princely states coloured green. The areas controlled by the British directly are coloured red.

The Instrument of Accession was a legal document first introduced by the Government of India Act 1935 and used in 1947 to enable each of the rulers of the princely states under British paramountcy to join one of the new dominions of India or Pakistan created by the Partition of British India.

The instruments of accession executed by the rulers, provided for the accession of states to the Dominion of India (or Pakistan) on three subjects, namely, defence, external affairs and communications. [1]

565 princely states existed in India during the period of British rule. These were not parts of British India proper, having never become possessions of the British Crown, but were tied to it in a system of subsidiary alliances.

The Government of India Act 1935 introduced the concept of the Instrument of Accession, wherein a ruler of a princely state could accede his kingdom into the 'Federation of India'. The federation concept was initially opposed by the Indian princes, but it is believed that they came around to its acceptance by the beginning of World War II.

Accession of states to the new Dominions

The Instrument of Accession was the legal document designed to bring about accession, where it was decided upon. It was executed by the Government of India on the one hand and by the rulers of each of the princely states, individually, on the other hand.

Whereas the Indian Independence Act 1947, provides that as from the fifteenth day of August, 1947, there shall be set up an Independent Dominion known as India, and that the Government of India Act, 1935 shall, with such omission, additions, adaptations and modifications as the governor-general may by order specify, be applicable to the Dominion of India.

And whereas the Government of India Act, 1935, as so adapted by the governor-general, provides that an Indian State may accede to the Dominion of India by an Instrument of Accession executed by the Ruler thereof.

Now, therefore, I Shriman Inder Mahander Rajrajeswar Maharajadhiraj Shri Hari Singhji, Jammu and Kashmir Naresh Tatha Tibbetadi Deshadhipathi, Ruler of Jammu and Kashmir State, in the exercise of my sovereignty in and over my said State do hereby execute this my Instrument of Accession and

Given under my hand this 26th day of OCTOBER nineteen hundred and forty seven.

Maharajadhiraj of Jammu and Kashmir State.

I do hereby accept this Instrument of Accession. Dated this twenty seventh day of October, nineteen hundred and forty seven.