From Wikipedia
https://en.wikipedia.org/wiki/Information_technology_in_India
Overview of information technology in India

Bhubaneswar was one of the 1st cites in India to receive STPI back in 1991.[ citation needed] 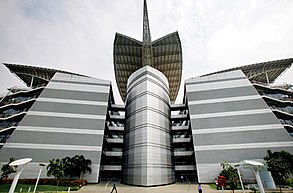 Infosys Media Centre in Bangalore, India. Infosys is one of the largest Indian IT companies.[ citation needed]

Information Technology in India is an industry consisting of two major components: IT services and business process outsourcing (BPO). [1] The sector has increased its contribution to India's GDP from 1.2% in 1998 to 7.7% in 2017. [2] According to NASSCOM, the sector aggregated revenues US$180 billion in 2019, [3] [4] with export revenue of standing at US$99 billion and domestic revenue at US$48 billion, growing by over 13%. As of 2020, India's IT workforce accounts for 4.36 million employees. [5] The United States accounts for two-thirds of India's IT services exports. [6]

India's IT Services industry was born in Mumbai in 1967 with the creation of Tata Consultancy Services [7] who in 1977 partnered with Burroughs which began India's export of IT services. [8] The first software export zone, SEEPZ – the precursor to the modern-day IT park – was established in Mumbai in 1973. More than 80 percent of the country's software exports were from SEEPZ in the 1980s. [9]

Within 90 days of its establishment, the Task Force produced an extensive background report on the state of technology in India and an IT Action Plan with 108 recommendations. The Task Force could act quickly because it built upon the experience and frustrations of state governments, central government agencies, universities, and the software industry. Much of what it proposed was also consistent with the thinking and recommendations of international bodies like the World Trade Organization (WTO), International Telecommunications Union (ITU), and World Bank. In addition, the Task Force incorporated the experiences of Singapore and other nations, which implemented similar programs. It was less a task of invention than of sparking action on a consensus that had already evolved within the networking community and government.

TIDEL Park in Chennai was the largest IT park in Asia when it was opened in 1999.

In 1991 the Department of Electronics broke this impasse, creating a corporation called Software Technology Parks of India (STPI) that, being owned by the government, could provide VSAT communications without breaching its monopoly. STPI set up software technology parks in different cities, each of which provided satellite links to be used by firms; the local link was a wireless radio link. In 1993 the government began to allow individual companies their own dedicated links, which allowed work done in India to be transmitted abroad directly. Indian firms soon convinced their American customers that a satellite link was as reliable as a team of programmers working in the clients’ office.

A joint EU-India group of scholars was formed on 23 November 2001 to further promote joint research and development. On 25 June 2002, India and the European Union agreed to bilateral cooperation in the field of science and technology. From 2017, India holds a Associate Member State status at CERN, while a joint India-EU Software Education and Development Center will be located in Bangalore. [11]

The USA started hiring people to fix the Y2K bug problem across the globe and India provided the engineers in great numbers to fix this issue. The requirement to fix this bug also shoots up the BPO (Business Process Outsourcing) sector of India. India provided highly qualified engineers at an affordable salary. Many IT companies of India such as Infosys and TCS hired employees to strengthen their IT base and IT hubs like Bangalore and Hyderabad boomed.[ citation needed]

In the contemporary world economy, India is the largest exporter of IT. Exports dominate the Indian IT industry and constitute about 79% of the industry's total revenue. However, the domestic market is also significant, with robust revenue growth. [2] The industry's share of total Indian exports (merchandise plus services) increased from less than 4% in FY1998 to about 25% in FY2012. The technologically-inclined services sector in India accounts for 40% of the country's GDP and 30% of export earnings as of 2006, while employing only 25% of its workforce, according to Sharma (2006). According to Gartner, the "Top Five Indian IT Services Providers" are Tata Consultancy Services, Infosys, Wipro, Tech Mahindra, and HCL Technologies. [12]

Bangalore is also known as the "startup capital of India"; the city is home to 44 percent of all Indian unicorn startup companies as of 2020. [18]

Hyderabad – known for the HITEC City or Cyberabad – is India's second largest information technology exporter and a major global IT hub, and the largest bioinformatics hub in India. [19] [20] Hyderabad has emerged as the second largest city in the country for software exports pipping competitors Chennai and Pune. [21] [22] [23] Notable tech companies include Accenture, Amazon, Deloitte, Tata Consultancy Services, Microsoft, HCL Technologies, Oracle Corporation, Google, Qualcomm, Dell, Cognizant. As of 2020, the IT exports from Hyderabad was ₹128,807 crore (US$15 billion), the city houses 1500 IT and ITES companies that provide 582,126 employment. [24] [25] [26] [27] Notable tech and pharma parks are HITEC City, Genome Valley, and Hyderabad Pharma City. 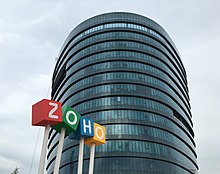 As of 2018 [update], Chennai is India's third-largest exporter of information technology (IT) after Bangalore and Hyderabad and business process outsourcing (BPO) services. [28] [29] TIDEL Park in Chennai was billed as Asia's largest IT park when it was built. [30] [31] Notable tech parks are International Tech Park, DLF Cybercity SEZ, Mahindra World City, SIPCOT IT Park, Olympia Tech Park, One Indiabulls Park, L&T Estancia IT SEZ and Ramanujan IT City. City has an expressway called as IT expressways and a preferred location for IT industries. Major software companies such as Tata Consultancy Services, Infosys, Zoho, Capgemini, Cognizant Technology Solutions, Accenture, UST Global, BirlaSoft, HCL Technologies have their offices set up here, with some of them making Chennai their largest base. [29]

Delhi NCR is one of the major IT hub in India. Cities in NCR region like Gurgaon and Noida have several companies that serves the local and global markets. [36]