From Wikipedia
https://en.wikipedia.org/wiki/Indo-Pacific
A biogeographic region of Earth's seas
This article is about a region. For similar region, see Asia-Pacific. For the proposed language family, see Indo-Pacific languages. For the Australian rail service, see Indian Pacific. 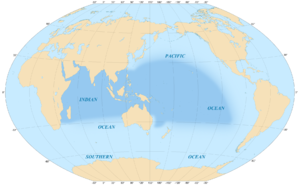 The Indo-Pacific, sometimes known as the Indo–West Pacific or Indo–Pacific Asia, is a biogeographic region of Earth's seas, comprising the tropical waters of the Indian Ocean, the western and central Pacific Ocean, and the seas connecting the two in the general area of Indonesia. It does not include the temperate and polar regions of the Indian and Pacific oceans, nor the Tropical Eastern Pacific, along the Pacific coast of the Americas, which is also a distinct marine realm.

The term is especially useful in marine biology, ichthyology, and similar fields, since many marine habitats are continuously connected from Madagascar to Japan and Oceania, and a number of species occur over that range, but are not found in the Atlantic Ocean.

The term first appeared in academic use in oceanography and geopolitics. Scholarship has shown that the "Indo-Pacific" concept circulated in Weimar Germany, and spread to interwar Japan. German political oceanographers envisioned an "Indo-Pacific" comprising anticolonial India and republican China, as German allies, against "Euro-America". [2] Since 2010s, the term "Indo-Pacific" has been increasingly used in geopolitical discourse. It also has "symbiotic link" with the Quadrilateral Security Dialogue, or "Quad", an informal grouping of like-minded democracies in the region, comprising Australia, Japan, India, and the United States. It has been argued that the concept may lead to a change in popular "mental maps" of how the world is understood in strategic terms.

The WWF and Nature Conservancy divide the Indo-Pacific into three realms (or subrealms), and each of these into a number of marine provinces.

The Central Indo-Pacific includes the numerous seas and straits connecting the Indian and Pacific oceans, including the seas surrounding the Indonesian archipelago (with the exception of Sumatra's northwest coast, which is part of the Western Indo-Pacific), the South China Sea, the Philippine Sea, the north coast of Australia, and the seas surrounding New Guinea, western and central Micronesia, New Caledonia, the Solomon Islands, Vanuatu, Fiji, and Tonga. The Central Indo-Pacific, due in part to its central location at the meeting of two oceans, has the greatest diversity of corals and mangroves.

The Eastern Indo-Pacific surrounds the mostly volcanic islands of the central Pacific Ocean, extending from the Marshall Islands through central and southeastern Polynesia to Easter Island and Hawaii.

The Western Indo-Pacific covers the western and central portion of the Indian Ocean, including Africa's east coast, the Red Sea, Gulf of Aden, Persian Gulf, Arabian Sea, Bay of Bengal, and Andaman Sea, as well as the coastal waters surrounding Madagascar, the Seychelles, Comoros, Mascarene Islands, Maldives, and Chagos Archipelago.

Some seashore and coastal plants are found throughout most of the region, including the trees Pisonia grandis, Calophyllum inophyllum, Heliotropium arboreum, Pandanus tectorius, Cordia subcordata, Guettarda speciosa, and the shrubs Scaevola taccada, Suriana maritima, and Pemphis acidula. These plants have adapted to grow on coral sand, and have seeds adapted to crossing salt water, including distribution by birds or which can survive floating in salt water. [3]

The trees coconut (Coco nucifera), candlenut (Aleurites moluccanus), and Morinda citrifolia originated in the Central Indo-Pacific, and were spread further across the region by human settlers. [3]

The "Indo-Pacific" has been an economic idea since its early formulation in Weimar Germany. According to Hansong Li, the German geographer Karl Haushofer, son of the economist Max Haushofer, believed that capital, along with urbanisation and population growth, are key vectors that determine the 'manometers' of the oceanic region. Haushofer also explained why industrialisation broke out in Europe rather than the Indo-Pacific by a spatial theory of demography. [4]

In the 21st century, with the rising involvement of the US in the new growth areas of Asia, the idea of the Indo-Pacific Economic Corridor emerged during the US-India Strategic Dialogue of 2013. The Secretary of State John Kerry referred to the potential of the Indo-Pacific Economic Corridor in transforming the prospects for development and investments as well as for trade and transit between the economies of South and Southeast Asia Indo-Pacific economic corridor. [5]

K. Y. Home in his scholarly study has mapped out the potential for various emerging trans-regional corridors in Asia along with the challenges of linking IPEC into the larger web of regional economic integration initiatives taking shape in the region in 2017. [6]

The German geopolitician Karl Haushofer first used "Indo-Pacific" in the 1920s in multiple works on geography and geopolitics: Geopolitics of the Pacific Ocean (1924), Building Blocks of Geopolitics (1928), Geopolitics of Pan-Ideas (1931), and German Cultural Politics in the Indo-Pacific Space (1939). Haushofer legitimated the integration of the two oceans by evidence in marine biology, oceanography, ethnography, and historical philology. He envisioned an "Indo-Pacific" comprising anticolonial forces in India and China, as Germany's ally against the maritime domination of Britain, United States, and Western Europe. [7]

The Japanese Prime Minister Shinzō Abe referred to the "confluence" of the Indian and Pacific Oceans in his speech to the Indian Parliament in August 2007 as "the dynamic coupling as seas of freedom and of prosperity" in the "broader Asia". [8] [9] From 2010 onwards, the term Indo-Pacific acquired salience within the Indian government and has since been used often by India's apex political leadership. [10] From about 2011 onwards, the term has been used frequently by strategic analysts and high-level government/military leadership in Australia, Japan and the US to denote said region. However, a formal/ official documented articulation of the term first appeared in Australia's Defence White Paper, 2013. [11] It is also "symbiotically linked" with the Quadrilateral Security Dialogue - an informal grouping of like-minded democracies in the region, comprising Australia, Japan, India, and the US.

In 2019, the U.S. State Department published a document formalizing the concept of a " Free and Open Indo-Pacific", to be sustained among members of "the Quad", a partnership of four Indo-Pacific democracies led by the United-States, in concert with Australia, India, and Japan. [14] 'Indo-Pacific' has also featured prominently in top-level U.S. strategic documents such as the 2017 National Security Strategy, [15] the 2018 Nuclear Posture Review, [16] and the 2018 National Defense Strategy. [17] It has been argued that the concept of the Indo-Pacific may lead to a change in popular "mental maps" of how the world is understood in strategic terms. [18] In 2013, US officials have begun using the term "Indo-Asia Pacific". [19] This enabled America to maintain its geographic inclusiveness in the new coinage of 'Indo-Pacific'.

The term's profile was raised when it found mention in the joint statement issued by the Indian Prime Minister Narendra Modi and United States President Donald Trump after the former's state visit to the White House on 26 June 2017. "As responsible stewards in the Indo-Pacific region, President Trump and Prime Minister Modi agreed that a close partnership between the United States and India is central to peace and stability in the region. In marking 70 years of diplomatic relations between India and the United States, the leaders resolved to expand and deepen the strategic partnership between the countries and advance common objectives. Above all, these objectives include combatting terrorist threats, promoting stability across the Indo-Pacific region, increasing free and fair trade, and strengthening energy linkages". [20] However, President Trump's November 2017 articulation on Indo-Pacific was widely seen as something that would usher in a new (US-China) Cold War. [21] This led to the Indian Prime Minister spelling out the Indian vision of Indo-Pacific as an enabler for "a common pursuit of progress and prosperity... not directed against any country... (albeit based on) our principled commitment to rule of law." [22]