From Wikipedia
https://en.wikipedia.org/wiki/Hypotenuse
Longest side of a right-angled triangle, the side opposite of the right angle

A right-angled triangle and its hypotenuse.

The word hypotenuse is derived from Greek ἡ τὴν ὀρθὴν γωνίαν ὑποτείνουσα (sc. γραμμή or πλευρά), meaning "[side] subtending the right angle" ( Apollodorus), [1] ὑποτείνουσα hupoteinousa being the feminine present active participle of the verb ὑποτείνω hupo-teinō "to stretch below, to subtend", from τείνω teinō "to stretch, extend". The nominalised participle, ἡ ὑποτείνουσα, was used for the hypotenuse of a triangle in the 4th century BC (attested in Plato, Timaeus 54d). The Greek term was loaned into Late Latin, as hypotēnūsa. [2][ better source needed] The spelling in -e, as hypotenuse, is French in origin ( Estienne de La Roche 1520). [3] 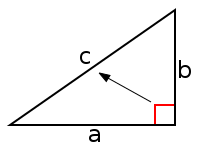 The Pythagorean theorem, and hence this length, can also be derived from the law of cosines by observing that the angle opposite the hypotenuse is 90° and noting that its cosine is 0:

Many computer languages support the ISO C standard function hypot(x,y), which returns the value above. The function is designed not to fail where the straightforward calculation might overflow or underflow and can be slightly more accurate and sometimes significantly slower.

Some scientific calculators provide a function to convert from rectangular coordinates to polar coordinates. This gives both the length of the hypotenuse and the angle the hypotenuse makes with the base line (c1 above) at the same time when given x and y. The angle returned is normally given by atan2(y,x).

In the figure, a is the hypotenuse and b and c are the catheti. The orthographic projection of b is m, and of c is n.

By means of trigonometric ratios, one can obtain the value of two acute angles,

, of the right triangle.

Given the length of the hypotenuse 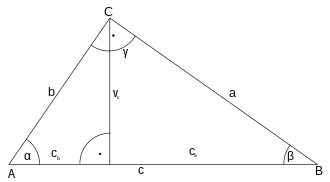 The trigonometric inverse function is:

is the angle opposite the cathetus

The adjacent angle of the catheti

One may also obtain the value of the angle