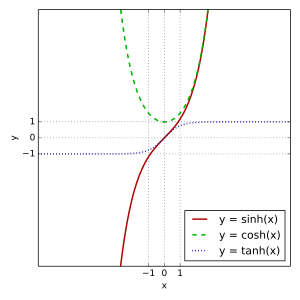 In mathematics, hyperbolic functions are analogues of the ordinary trigonometric functions, but defined using the hyperbola rather than the circle. Just as the points (cos t, sin t) form a circle with a unit radius, the points (cosh t, sinh t) form the right half of the unit hyperbola. Also, just as the derivatives of sin(t) and cos(t) are cos(t) and –sin(t), the derivatives of sinh(t) and cosh(t) are cosh(t) and +sinh(t).

Hyperbolic functions occur in the calculations of angles and distances in hyperbolic geometry. They also occur in the solutions of many linear differential equations (such as the equation defining a catenary), cubic equations, and Laplace's equation in Cartesian coordinates. Laplace's equations are important in many areas of physics, including electromagnetic theory, heat transfer, fluid dynamics, and special relativity.

from which are derived: [5]

corresponding to the derived trigonometric functions.

The inverse hyperbolic functions are: [1] 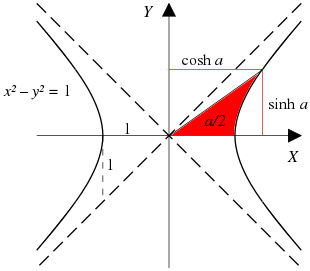 A ray through the unit hyperbola x2 − y2 = 1 at the point (cosh a, sinh a), where a is twice the area between the ray, the hyperbola, and the x-axis. For points on the hyperbola below the x-axis, the area is considered negative (see animated version with comparison with the trigonometric (circular) functions).

By Lindemann–Weierstrass theorem, the hyperbolic functions have a transcendental value for every non-zero algebraic value of the argument. [13]

Hyperbolic functions were introduced in the 1760s independently by Vincenzo Riccati and Johann Heinrich Lambert. [14] Riccati used Sc. and Cc. (sinus/cosinus circulare) to refer to circular functions and Sh. and Ch. (sinus/cosinus hyperbolico) to refer to hyperbolic functions. Lambert adopted the names, but altered the abbreviations to those used today. [15] The abbreviations sh, ch, th, cth are also currently used, depending on personal preference. 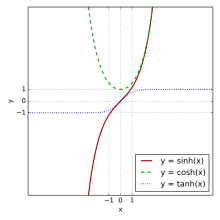 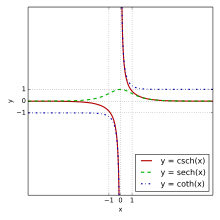 There are various equivalent ways to define the hyperbolic functions. 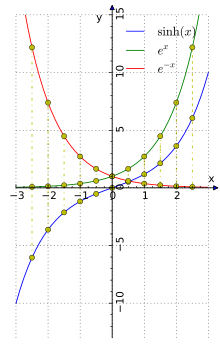 sinh x is half the difference of ex and e−x 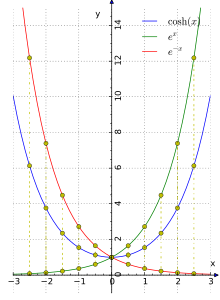 cosh x is the average of ex and e−x

The hyperbolic functions may be defined as solutions of differential equations: The hyperbolic sine and cosine are the unique solution (s, c) of the system

are necessary because every pair of functions of the form

Hyperbolic functions may also be deduced from trigonometric functions with complex arguments:

The above definitions are related to the exponential definitions via Euler's formula (See § Hyperbolic functions for complex numbers below).

It can be shown that the area under the curve of the hyperbolic cosine (over a finite interval) is always equal to the arc length corresponding to that interval: [16]

into a hyperbolic identity, by expanding it completely in terms of integral powers of sines and cosines, changing sine to sinh and cosine to cosh, and switching the sign of every term containing a product of two sinhs.

Odd and even functions:

Thus, cosh x and sech x are even functions; the others are odd functions.

the last of which is similar to the Pythagorean trigonometric identity.

for the other functions.

The following inequality is useful in statistics:

It can be proved by comparing term by term the Taylor series of the two functions.

Each of the functions sinh and cosh is equal to its second derivative, that is:

All functions with this property are linear combinations of sinh and cosh, in particular the exponential functions

The following integrals can be proved using hyperbolic substitution:

where C is the constant of integration.

It is possible to express explicitly the Taylor series at zero (or the Laurent series, if the function is not defined at zero) of the above functions.

This series is convergent for every complex value of x. Since the function sinh x is odd, only odd exponents for x occur in its Taylor series.

This series is convergent for every complex value of x. Since the function cosh x is even, only even exponents for x occur in its Taylor series.

The sum of the sinh and cosh series is the infinite series expression of the exponential function.

The following series are followed by a description of a subset of their domain of convergence, where the series is convergent and its sum equals the function.

is the nth Bernoulli number

is the nth Euler number 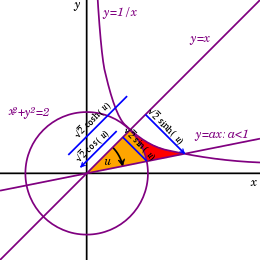 The hyperbolic functions represent an expansion of trigonometry beyond the circular functions. Both types depend on an argument, either circular angle or hyperbolic angle.

Since the area of a circular sector with radius r and angle u (in radians) is r2u/2, it will be equal to u when r = √2. In the diagram, such a circle is tangent to the hyperbola xy = 1 at (1,1). The yellow sector depicts an area and angle magnitude. Similarly, the yellow and red sectors together depict an area and hyperbolic angle magnitude.

The legs of the two right triangles with hypotenuse on the ray defining the angles are of length √2 times the circular and hyperbolic functions.

The hyperbolic angle is an invariant measure with respect to the squeeze mapping, just as the circular angle is invariant under rotation. [21]

The Gudermannian function gives a direct relationship between the circular functions, and the hyperbolic ones that does not involve complex numbers.

The graph of the function a cosh(x/a) is the catenary, the curve formed by a uniform flexible chain, hanging freely between two fixed points under uniform gravity.

Relationship to the exponential function

The first one is analogous to Euler's formula

Since the exponential function can be defined for any complex argument, we can also extend the definitions of the hyperbolic functions to complex arguments. The functions sinh z and cosh z are then holomorphic.

Relationships to ordinary trigonometric functions are given by Euler's formula for complex numbers:

Thus, hyperbolic functions are periodic with respect to the imaginary component, with period

for hyperbolic tangent and cotangent).