From Wikipedia
https://en.wikipedia.org/wiki/Hurricane_Kenna
Category 5 Pacific hurricane in 2002
This article is about the Pacific hurricane of 2002. For other storms of the same name, see Hurricane Kenna (disambiguation).

Hurricane Kenna was the fourth-most intense tropical cyclone on record in the Eastern Pacific basin, and at the time the third-most intense Pacific hurricane to strike the west coast of Mexico. [1] Kenna was the sixteenth tropical depression, thirteenth tropical storm, seventh hurricane, sixth major hurricane, and third Category 5 hurricane of the 2002 Pacific hurricane season. After forming on October 22 to the south of Mexico from a tropical wave, forecasters consistently predicted the storm to strengthen much less than it actually did. Moving into an area of favorable upper-level conditions and warm sea surface temperatures, Kenna quickly strengthened to reach peak winds of 165 mph (270 km/h) as a Category 5 hurricane, on October 25, while located about 255 mi (410 km) southwest of Puerto Vallarta, Jalisco. Weakening as it turned to the northeast, the hurricane made landfall near San Blas, Nayarit as a Category 4 hurricane, with sustained winds of 140 mph (220 km/h), before dissipating on October 26 over the Sierra Madre Occidental mountains.

The name "Kenna" was retired from the list of Pacific hurricane names due to its effects on Mexico, which included US$101 million in damage and four deaths. The worst of the hurricane's effects occurred between San Blas in Nayarit and Puerto Vallarta in Jalisco, where over 100 people were injured and thousands of homes and businesses were damaged or destroyed. 95% of the buildings in San Blas were damaged, and hundreds of buildings were destroyed along coastal areas of Puerto Vallarta. 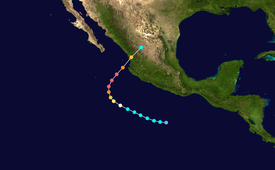 The origin of Hurricane Kenna can be traced to a tropical wave moving westward through the Caribbean Sea on October 16, possibly the same wave that passed near Barbados two days earlier. The wave entered the eastern Pacific Ocean on October 19, and a tropical disturbance along the wave axis gradually became better organized. Conditions favored continued development, and Dvorak classifications began late on October 20. Early on October 22, the system developed into Tropical Depression Fourteen-E while located about 375 mi (605 km) south of Manzanillo, Colima. [1] Initially the depression was disorganized, with little inner convective structure and sporadic deep convection. Computer models predicted an increase in wind shear by 60 hours; as such the National Hurricane Center forecast the depression to strengthen to a peak strength of 45 mph (70 km/h) before weakening. [2]

The depression quickly became better organized with a great increase in convection near the center, and six hours after forming it strengthened into Tropical Storm Kenna. Upper-level outflow and banding features improved in an organization, as well. With warm water temperatures of over 29 °C (84 °F) and updated model forecasts anticipating light amounts of vertical wind shear, forecasters predicted Kenna to slowly intensify to reach winds of 85 mph (135 km/h) within 72 hours of October 22. [3] The storm moved to the west-northwest around the periphery of a mid-level high-pressure system, and initially failed to strengthen further with much of its convection being associated with outer rainbands. On October 23, the outer rainbands dissipated and convection became more concentrated near the center, which coincided with a steady increase in strength. Late on October 23, Kenna intensified into a hurricane while located about 380 mi (615 km) southwest of Manzanillo. [1]

Shortly after becoming a hurricane, Kenna began to rapidly intensify with a 17 mi (27 km) wide eye located within its well-defined central dense overcast. [4] Early on October 24 Kenna became a major hurricane, and in a 24‑hour period the hurricane more than doubled its windspeed from 70 mph (115 km/h) winds to 145 mph (235 km/h). After turning to the north and northeast in response to the flow ahead of a large mid to upper-level trough, Kenna attained peak winds of 165 mph (265 km/h) early on October 25 while located about 255 mi (410 km) southwest of Puerto Vallarta, the third Category 5 hurricane of the season. A Reconnaissance Aircraft flight into the hurricane while it was near peak intensity recorded a pressure of 913  mbar ( hPa), [1] the fourth lowest recorded pressure for a Pacific hurricane. [5] [6]

Quickly after peaking, wind shear from the approaching trough weakened the hurricane, and by six hours after reaching peak intensity, the winds in Hurricane Kenna dropped to 150 mph (240 km/h), after the eye nearly dissipated. Despite a 27  mbar increase in pressure in 12 hours, convective activity increased prior to Kenna making landfall. On October 25, Hurricane Kenna made landfall near San Blas in the state of Nayarit, as a Category 4 hurricane, with estimated sustained winds of 140 mph (225 km/h). Hurricane Kenna was at the time, the third most intense Pacific hurricane to strike Mexico. The hurricane rapidly weakened over the mountainous terrain of western Mexico, and the circulation dissipated on October 26 over the Sierra Madre Occidental mountains. The remnants continued northeastward into the Gulf of Mexico and the southeastern United States later that day, producing rainfall across the region. [1]

About 27 hours before landfall, Mexican officials issued a hurricane watch from Mazatlán to Cabo Corrientes, Jalisco, with a tropical storm watch issued further south to Manzanillo. Six hours later when its track became more apparent, the watch was upgraded to a hurricane warning from Mazatlán to La Fortuna, with a tropical storm warning southward to Manzanillo. [1]

Roughly 8,800 of the 9,000 residents in the landfall location, San Blas, evacuated, which ultimately contributed to a low death toll. [1] Officials ordered for the evacuation of 50,000 residents and fishermen along the southwest coast of Mexico, including 3,000 in the Islas Marías, [7] 10,000 near Mazatlán, and 15,000 near flood-prone areas. Civil authorities closed all schools and docks in potentially affected areas. The Mexican Red Cross prepared for the storm by shipping 215  tonnes of relief supplies such as food, water, clothing, and medicine to the Red Cross branch in Jalisco. Assistance from the Yucatán Peninsula delivered 10  tonnes of food and water, as well. [8] The Mexican Red Cross prepared 20 emergency shelters in the state of Nayarit. [9] Officials took security measures in Los Cabos, Baja California Sur, where the Asia-Pacific Economic Cooperation was meeting during the passage of the hurricane. Early forecasts indicated a possible threat to the meeting, causing the government to prepare for a potential alternate site. [7] Officials recommended boats to stay at port due to severe conditions. [10]

Few official surface observations are available for the passage of the hurricane. Upon making landfall, Kenna was accompanied with an estimated 16 foot (4.9 m) storm surge in San Blas. The surge also affected Puerto Vallarta, with reports of 10 foot (3 m) waves rushing inland from the bay. The hurricane dropped about 1.38 inches (35 mm) of precipitation while passing about 60 mi (95 km) east of the offshore archipelago, Islas Marías. There, sustained winds reached an estimated 106 mph (170 km/h). [1] On land, Kenna dropped heavy rainfall peaking at 18.91 inches (480 mm) at San Ignacio, Sinaloa, and 12.89 inches (327 mm) near Manzanillo, Colima. [22] The highest recorded sustained wind on land was about 100 mph (161 km/h) at Tepic, Nayarit, with wind gusts at Puerto Vallarta reaching 50 mph (80 km/h). [1] The hurricane also produced heavy rainfall in Guerrero, Michoacán, Colima, and Jalisco, and hit Baja California Sur with strong winds and rough seas. [10]

In San Blas, strong winds from the hurricane damaged or destroyed 95% of the homes, [23] with 1,540 houses damaged and 8,800 people affected. [24] There, large commercial shrimp boats were swept up to 900 feet (275 m) inland from their docks. An elderly woman died in the city when the wall of her house collapsed on her. [1] Large portions of the city were covered with building debris and sand washed from the ocean. [8] Elsewhere in Nayarit, flying debris killed a person in Santiago Escuintla. There, two elderly men drowned, one by falling into a river. Both were believed to have been killed during the storm as they fled their homes. [1] In Santiago Ixcuintla, the hurricane damaged 3,770 homes, [24] and throughout Nayarit, strong winds from the hurricane destroyed the roofs of hundreds of houses. [25] Federal authorities lost communications with at least 30 Indian villages due to the high winds of the hurricane. [8] Kenna destroyed the entire banana, tobacco, and tomato crops in the rural areas of San Blas, Tecuala, and Acaponeta, leaving more than 700 subsistence farmers and their families in need of water and food. [24]

In Puerto Vallarta, about 100 mi (164 km) southeast of the landfall location, the storm surge resulted in an estimated damage total of US$5 million, primarily to hotels. [1] The surge flooded the hotels and other waterfront areas, and extended up to 330 feet (100 m) inland. Waist-deep floodwaters swept away vans and cars, [26] ruining several vehicles. The passage of the hurricane destroyed 150 stores near the ocean and extensively damaged three hotels. Damage to the city's port was minor. [27]

The hurricane injured at least 52 in Puerto Vallarta [28] and dozens in San Blas from widespread flying glass and other forms of debris, [1] with two people seriously injured due to the hurricane. Ten municipalities suffered substantial damage, [27] with insured damage in Mexico totaling US$96 million. [29] Rainfall from the hurricane spread across northern Mexico, causing minor flash floods and mudslides. [24]

The remnants of Kenna entered the south-central United States on October 26, resulting in enhanced rainfall in various locations. [1] 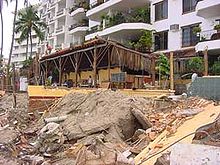 After the season had ended, the World Meteorological Organization retired the name Kenna and replaced it with Karina. [30]

The Mexican government declared the region in Nayarit near the landfall of Kenna as a disaster area, allowing for the usage of emergency funds. [8] Immediately after the passage of the hurricane, the Mexican Red Cross prepared 180 technical staff and volunteers from seven states to deliver 125  MT of food, medicine, and clothes to the areas most affected. [25] The Mexican government deployed the Mexican Army to the area to remove fallen trees and establish water treatment plants to assist the affected population. The Mexican Navy was sent to assist to support medical personnel in the San Blas area, and the government Department for Family Development assisted the Mexican Red Cross in delivering food. Grupo Modelo, brewers of Corona beer, sent 6,600  gallons (25,000 liters) of drinking water and 1000 food sets for the San Blas area. [24]

Backhoes and dump trucks gradually removed the debris and sand from San Blas. [8] Dozens of storeowners, municipal employees, and volunteers in Puerto Vallarta worked to clear the debris caused by the storm. The remaining stores, bars, and shops placed signs on their windows describing they were open in an effort to attract the tourists still in the town. [27] By about two months after the hurricane, most hotels, restaurants, and shops were reopened. [31]