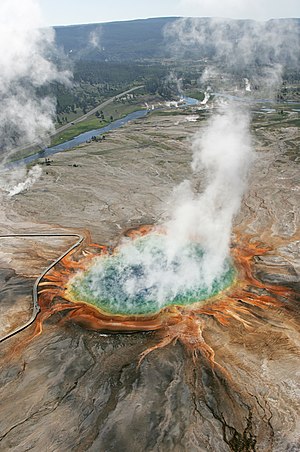 A hot spring, hydrothermal spring, or geothermal spring is a spring produced by the emergence of geothermally heated groundwater onto the surface of the Earth. The groundwater is heated either by shallow bodies of magma (molten rock) or by circulation through faults to hot rock deep in the Earth's crust. In either case, the ultimate source of the heat is radioactive decay of naturally occurring radioactive elements in the Earth's mantle, the layer beneath the crust.

Hot spring water often contains large amounts of dissolved minerals. The chemistry of hot springs ranges from acid sulfate springs with a pH as low as 0.8, to alkaline chloride springs saturated with silica, to bicarbonate springs saturated with carbon dioxide and carbonate minerals. Some springs also contain abundant dissolved iron. The minerals brought to the surface in hot springs often feed communities of extremophiles, microorganisms adopted to extreme conditions, and it is possible that life on Earth had its origin in hot springs. [1] [2]

Humans have made use of hot springs for bathing, relaxation, or medical therapy for thousands of years. However, some are hot enough that immersion can be harmful, leading to scalding and, potentially, death. [3]

There is no universally accepted definition of a hot spring. For example, one can find the phrase hot spring defined as

Water issuing from a hot spring is heated geothermally, that is, with heat produced from the Earth's mantle. This takes place in two ways. In areas of high volcanic activity, magma (molten rock) may be present at shallow depths in the Earth's crust. Groundwater is heated by these shallow magma bodies and rises to the surface to emerge at a hot spring. However, even in areas that do not experience volcanic activity, the temperature of rocks within the earth increases with depth. The rate of temperature increase with depth is known as the geothermal gradient. If water percolates deeply enough into the crust, it will be heated as it comes into contact with hot rock. This generally takes place along faults, where shattered rock beds provide easy paths for water to circulate to greater depths. [18]

Much of the heat is created by decay of naturally radioactive elements. An estimated 45 to 90 percent of the heat escaping from the Earth originates from radioactive decay of elements mainly located in the mantle. [19] [20] [21] The major heat-producing isotopes in the Earth are potassium-40, uranium-238, uranium-235, and thorium-232. [22] In areas with no volcanic activity, this heat flows through the crust by a slow process of thermal conduction, but in volcanic areas, the heat is carried to the surface more rapidly by bodies of magma. [23] 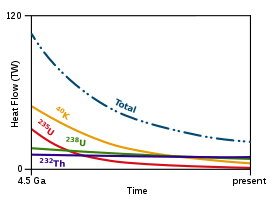 The radiogenic heat from the decay of 238U and 232Th are now the major contributors to the earth's internal heat budget.

A hot spring that periodically jets water and steam is called a geyser. In active volcanic zones such as Yellowstone National Park, magma may be present at shallow depths. If a hot spring is connected to a large natural cistern close to such a magma body, the magma may superheat the water in the cistern, raising its temperature above the normal boiling point. The water will not immediately boil, because the weight of the water column above the cistern pressurizes the cistern and suppresses boiling. However, as the superheated water expands, some of the water will emerge at the surface, reducing pressure in the cistern. This allows some of the water in the cistern to flash into steam, which forces more water out of the hot spring. This leads to a runaway condition in which a sizable amount of water and steam are forcibly ejected from the hot spring as the cistern is emptied. The cistern then refills with cooler water, and the cycle repeats. [24] [25]

An example of a non-volcanic warm spring is Warm Springs, Georgia (frequented for its therapeutic effects by paraplegic U.S. President Franklin D. Roosevelt, who built the Little White House there). Here the groundwater originates as rain and snow ( meteoric water) falling on the nearby mountains, which penetrates a particular formation ( Hollis Quartzite) to a depth of 3,000 feet (910 m) and is heated by the normal geothermal gradient. [27] 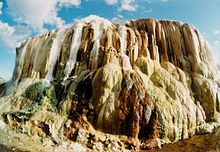 Hammam Maskhoutine in Algeria, an example of a bicarbonate hot spring

Because heated water can hold more dissolved solids than cold water, the water that issues from hot springs often has a very high mineral content, containing everything from calcium to lithium and even radium. [28] The overall chemistry of hot springs varies from alkaline chloride to acid sulfate to bicarbonate to iron-rich, each of which defines an end member of a range of possible hot spring chemistries. [29] [30]

Alkaline chloride hot springs are fed by hydrothermal fluids that form when groundwater containing dissolved chloride salts reacts with silicate rocks at high temperature. These springs have nearly neutral pH but are saturated with silica (SiO
2
). The solubility of silica depends strongly upon temperature, so upon cooling, the silica is deposited as geyserite, a form of opal (opal-A: SiO
2·nH
2O). [31] This process is slow enough that geyserite is not all deposited immediately around the vent, but tends to build up a low, broad platform for some distance around the spring opening. [32] [33] [34]

Acid sulfate hot springs are fed by hydrothermal fluids rich in hydrogen sulfide (H
2S), which is oxidized to form sulfuric acid, H
2SO
4. [32] The pH of the fluids is thereby lowered to values as low as 0.8. [35] The acid reacts with rock to alter it to clay minerals, oxide minerals, and a residue of silica. [30]

Bicarbonate hot springs are fed by hydrothermal fluids that form when carbon dioxide (CO
2) and groundwater react with carbonate rocks. [32] When the fluids reach the surface, CO
2 is rapidly lost and carbonate minerals precipitate as travertine, so that bicarbonate hot springs tend to form high-relief structures around their openings. [30]

Iron-rich springs are characterized by the presence of microbial communities that produce clumps of oxidized iron from iron in the hydrothermal fluids feeding the spring. [36] [30] 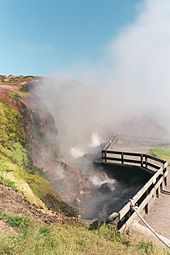 Hot springs range in flow rate from the tiniest "seeps" to veritable rivers of hot water. Sometimes there is enough pressure that the water shoots upward in a geyser, or fountain. 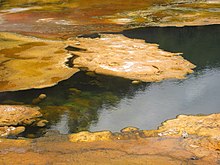 Hot springs often host communities of microorganisms adapted to life in hot, mineral-laden water. These include thermophiles, which are a type of extremophile that thrives at high temperatures, between 45 and 80 °C (113 and 176 °F). [40] Further from the vent, where the water has had time to cool and precipitate part of its mineral load, conditions favor organisms adapted to less extreme conditions. This produces a succession of microbial communities as one moves away from the vent, which in some respects resembles the successive stages in the evolution of early life. [41]

For example, in a bicarbonate hot spring, the community of organisms immediately around the vent is dominated by filamentous thermophilic bacteria, such as Aquifex and other Aquificales, that oxidize sulfide and hydrogen to obtain energy for their life processes. Further from the vent, where water temperatures have dropped below 60 °C (140 °F), the surface is covered with microbial mats 1 centimetre (0.39 in) thick that are dominated by cyanobacteria, such as Spirulina, Oscillatoria, and Synechococcus, [42] and green sulfur bacteria such as Chloroflexus. These organisms are all capable of photosynthesis, though green sulfur bacteria produce sulfur rather than oxygen during photosynthesis. Still further from the vent, where temperatures drop below 45 °C (113 °F), conditions are favorable for a complex community of microorganisms that includes Spirulina, Calothrix, diatoms and other single-celled eukaryotes, and grazing insects and protozoans. As temperatures drop close to those of the surroundings, higher plants appear. [41]

Hot springs are a dependable source of water that provides a rich chemical environment. This includes reduced chemical species that microorganisms can oxidize as a source of energy. In contrast with " black smokers" (hydrothermal vents on the ocean floor), hot springs produce fluids at less extreme temperatures, and they experience cycles of wetting and drying that promote formation of simple organic molecules. For these reasons, it has been hypothesized that hot springs may be the place of origin of life on Earth. [41] [30] 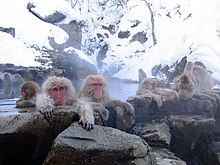 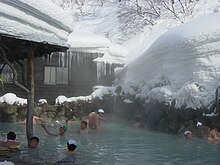 Hot springs have been enjoyed by humans for thousands of years. [44] Even macaques, which are nonhuman primates, are known to have extended their northern range into Japan by making use of hot springs to protect themselves from cold stress. [45] Hot spring baths ( onsen) have been in use in Japan for at least two thousand years, traditionally for cleanliness and relaxation, but increasingly for their therapeutic value. [46] In the Homeric Age of Greece (ca. 1000 BCE), baths were primarily for hygiene, but by the time of Hippocrates (ca. 460 BCE), hot springs were credited with healing power. The popularity of hot springs has fluctuated over the centuries since, but they are now popular around the world. [47]

Because of both the folklore and the claimed medical value attributed to some hot springs, they are often popular tourist destinations, and locations for rehabilitation clinics for those with disabilities. [48] [49] [50] However, the scientific basis for therapeutic bathing in hot springs is uncertain. Hot bath therapy for lead poisoning was common and reportedly highly successful in the 18th and 19th centuries, and may have been due to diuresis (increased production of urine) from sitting in hot water, which increased excretion of lead; better food and isolation from lead sources; and increased intake of calcium and iron. Significant improvement in patients suffering from rheumatoid arthritis and ankylosing spondylitis have been reported in studies of spa therapy, but these suffer from methodological problems, such as the obvious impracticality of placebo-controlled studies (in which a patient does not know if he is receiving the therapy). As a result, the therapeutic effectiveness of hot spring therapy remains uncertain. [47]

Hot springs in volcanic areas are often at or near the boiling point. People have been seriously scalded and even killed by accidentally or intentionally entering these springs. [51] [52] [53]

Some hot springs microbiota are infectious to humans:

The customs and practices observed differ depending on the hot spring. It is common practice that bathers should wash before entering the water so as not to contaminate the water (with/without soap). [60] In many countries, like Japan, it is required to enter the hot spring with no clothes on, including swimwear. Often there are different facilities or times for men and women, but mixed onsen do exist. [61] In some countries, if it is a public hot spring, swimwear is required. [62] [63]

Distribution of geothermal springs in the US
Main article: List of hot springs