From Wikipedia
https://en.wikipedia.org/wiki/Horn_(anatomy)
For other uses, see Horn. 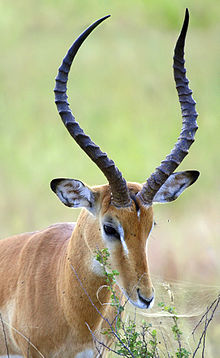 A pair of horns on a male impala 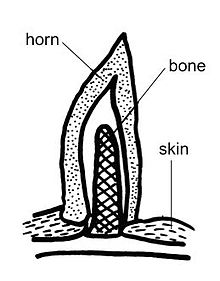 Anatomy and physiology of an animal's horn

A horn is a permanent pointed projection on the head of various animals that consists of a covering of keratin and other proteins surrounding a core of live bone. Horns are distinct from antlers, which are not permanent. In mammals, true horns are found mainly among the ruminant artiodactyls,[ not verified in body] in the families Antilocapridae ( pronghorn) and Bovidae ( cattle, goats, antelope etc.). Cattle horns arise from subcutaneous connective tissue (under the scalp) and later fuse to the underlying frontal bone. [1]

One pair of horns is usual; however, two or more pairs occur in a few wild species and in some domesticated breeds of sheep. Polycerate (multi-horned) sheep breeds include the Hebridean, Icelandic, Jacob, Manx Loaghtan, and the Navajo-Churro.

Horns usually have a curved or spiral shape, often with ridges or fluting. In many species, only males have horns. Horns start to grow soon after birth and continue to grow throughout the life of the animal (except in pronghorns, which shed the outer layer annually, but retain the bony core). Partial or deformed horns in livestock are called scurs. Similar growths on other parts of the body are not usually called horns, but spurs, claws, or hooves, depending on the part of the body on which they occur.

The term "horn" is also popularly applied to other hard and pointed features attached to the head of animals in various other families:

Cutaneous horns are the only examples of horns growing on people. [4]

Cases of people growing horns have been historically described, sometimes with mythical status. Researchers have not however discovered photographic evidence of the phenomenon. [5] There are human cadaveric specimens that show outgrowings, but these are instead classified as osteomas or other excrescences. [5]

The phenomenon of humans with horns has been observed in countries lacking advanced medicine. There are living people, several in China, with cases of cutaneous horns, most common in the elderly. [6]

Some people, notably The Enigma, have horn implants; that is, they have implanted silicone beneath the skin as a form of body modification. [7]

African buffalo (both sexes have horns)

Animals have a variety of uses for horns and antlers, including defending themselves from predators and fighting members of their own species (horn fighting) for territory, dominance or mating priority. [8] [9] Horns are usually present only in males but in some species, females too may possess horns. It has been theorized by researchers that taller species living in the open are more visible from longer distances and more likely to benefit from horns to defend themselves against predators. Female bovids that are not hidden from predators due to their large size or open savannahlike habitat are more likely to bear horns than small or camouflaged species. [10]

In addition, horns may be used to root in the soil or strip bark from trees. In animal courtship many use horns in displays. For example, the male blue wildebeest reams the bark and branches of trees to impress the female and lure her into his territory. Some animals with true horns use them for cooling. The blood vessels in the bony core allow the horns to function as a radiator.

After the death of a horned animal, the keratin may be consumed by the larvae of the horn moth.