A home appliance, also referred to as a domestic appliance, an electric appliance or a household appliance, [1] is a machine which assists in household functions [2] such as cooking, cleaning and food preservation.

Appliances are divided into three types:

This categorization is reflected in the maintenance and repair of these types of products. Brown goods typically require high technical knowledge and skills (which get more complex with time, such as going from a soldering iron to a hot-air soldering station), while white goods may need more practical skills and force to manipulate the devices and heavy tools required to repair them.

Given a broad usage, the domestic application attached to home appliance is tied to the definition of appliance as "an instrument or device designed for a particular use or function". [5] More specifically, Collins English Dictionary defines "home appliance" as: "devices or machines, usually electrical, that are in your home and which you use to do jobs such as cleaning or cooking". [6] The broad usage, afforded to the definition allows for nearly any device intended for domestic use to be a home appliance, including consumer electronics as well as stoves, [7] refrigerators, toasters [7] and air conditioners. 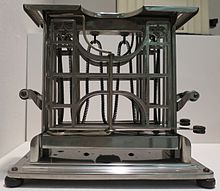 While many appliances have existed for centuries, the self-contained electric or gas powered appliances are a uniquely American innovation that emerged in the twentieth century. The development of these appliances is tied to the disappearance of full-time domestic servants and the desire to reduce the time-consuming activities in pursuit of more recreational time. In the early 1900s, electric and gas appliances included washing machines, water heaters, refrigerators, kettles and sewing machines. The invention of Earl Richardson's small electric clothes iron in 1903 gave a small initial boost to the home appliance industry. In the Post–World War II economic expansion, the domestic use of dishwashers, and clothes dryers were part of a shift for convenience. Increasing discretionary income was reflected by a rise in miscellaneous home appliances. [8] [9][ self-published source]

In America during the 1980s, the industry shipped $1.5 billion worth of goods each year and employed over 14,000 workers, with revenues doubling between 1982 and 1990 to $3.3 billion. Throughout this period companies merged and acquired one another to reduce research and production costs and eliminate competitors, resulting in antitrust legislation.

The United States Department of Energy reviews compliance with the National Appliance Energy Conservation Act of 1987, which required manufacturers to reduce the energy consumption of the appliances by 25% every five years. [8] 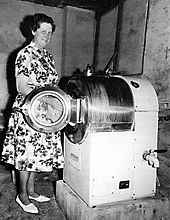 Small kitchen appliances: a food processor, a waffle iron, a coffee maker, and an electric kettle 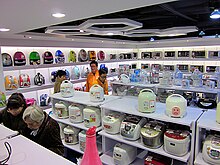 The small appliance department at a store

Consumer electronics or home electronics [10] are electronic ( analog or digital) equipment intended for everyday use, typically in private homes. Consumer electronics include devices used for entertainment, communications and recreation. In British English, they are often called brown goods by producers and sellers, to distinguish them from " white goods" which are meant for housekeeping tasks, such as washing machines and refrigerators, although nowadays, these could be considered brown goods, some of these being connected to the Internet. [13] [n 1] Some such appliances were traditionally finished with genuine or imitation wood, hence the name. This has become rare but the name has stuck, even for goods that are unlikely ever to have had a wooden case (e.g. camcorders). In the 2010s, this distinction is absent in large big box consumer electronics stores, which sell both entertainment, communication, and home office devices and kitchen appliances such as refrigerators. The highest selling consumer electronics products are Compact discs [15] Examples are: home electronics, radio receivers, TV sets, [7] CD, VCRs and DVD players, [7] digital cameras, camcorders, still cameras, clocks, alarm clocks, computers, video game consoles, HiFi and home cinema, telephones and answering machines.

A survey conducted in 2020 of more than thirteen thousand people in the UK revealed how long appliance owners had their appliances before needing to replace them due to a fault, deteriorating performance, or the age of the appliance.

There is a trend of networking home appliances together, and combining their controls and key functions. [17] For instance, energy distribution could be managed more evenly so that when a washing machine is on, an oven can go into a delayed start mode, or vice versa. Or, a washing machine and clothes dryer could share information about load characteristics (gentle/normal, light/full), and synchronize their finish times so the wet laundry does not have to wait before being put in the dryer.

Appliance recycling consists of dismantling waste home appliances and scrapping their parts for reuse. The main types of appliances that are recycled are T.V.s, refrigerators, air conditioners, washing machines, and computers. It involves disassembly, removal of hazardous components and destruction of the equipment to recover materials, generally by shredding, sorting and grading. [22]