The Hohenzollern Bridge ( German: Hohenzollernbrücke) is a bridge crossing the river Rhine in the German city of Cologne (German: Köln). It crosses the Rhine at kilometre 688.5. Originally, the bridge was both a railway and road bridge. However, after its destruction in 1945 and its subsequent reconstruction, it was only accessible to rail and pedestrian traffic.

It is the most heavily used railway bridge in Germany with more than 1,200 trains daily, [3] connecting the Köln Hauptbahnhof and Köln Messe/Deutz stations.

The bridge was constructed between 1907 and 1911 after the demolition of old bridge, the Cathedral Bridge (Dombrücke). The Cathedral Bridge was unable to handle the increasing traffic in Cologne.[ citation needed] The new bridge was named after the House of Hohenzollern, the rulers of Prussia and German Emperors. (At the time, Cologne formed part of the Prussian Rhine Province.)

The President of the Railway Directorate Cologne, Paul von Breitenbach started planning the construction and handed over this work to his successor Rudolf Schmidt in 1906. The railway engineer Fritz Beermann headed the project; under his direction Friedrich Dirksen worked out the designs. The construction of the Hohenzollern Bridge took place from 1907 to 1911; Kaiser Wilhelm II inaugurated it on 22 May 1911. [4]

The bridge consisted of three adjacent bridge parts, each with three iron truss arches (passage openings) in the longitudinal direction to accommodate four railroad tracks and a road. Although the location of the bridge and of the railway station were already controversial in previous structures, the Hohenzollern Bridge adopted the orientation of the previous bridge on the central axis of the cathedral.

Four equestrian statues of Prussian kings and German emperors of the Hohenzollern family flank each ramp. The Cathedral Bridge was already adorned with the statues of Friedrich Wilhelm IV of Prussia by sculptor Gustav Blaeser and Kaiser Wilhelm I by Friedrich Drake, which now stand on the right (east) bank of the Rhine (see pictures above). In addition sculptor Louis Tuaillon made the equestrian statues of Friedrich III and, during his lifetime, OF Wilhelm II, which were placed on the left (west) bank of the Rhine (see pictures below). The statues symbolize the era of Prussian rule in the Rhine Province.

The Hohenzollern Bridge functioned as one of the most important bridges in Germany during World War II (1939-1945); even consistent daily airstrikes did not badly damage it. On 6 March 1945 German military engineers blew up the bridge as Allied troops began their assault on Cologne.

After Germany surrendered on 8 May 1945, the bridge was initially made operational on a makeshift basis, but soon reconstruction began in earnest. By 8 May 1948 pedestrians could again use the Hohenzollern Bridge.

The (southern) road traffic decks were removed[ by whom?] so that the bridge now only consisted of six individual bridge decks, built partly in their old form. The surviving portals and bridge towers were not repaired and were demolished in 1958. In 1959 reconstruction of the bridge was completed.

During the 1980s the bridge was renovated with two new tracks. A minimal portion of the old road ramp on the Deutz side was preserved, together with cobblestones and tram tracks. The rest was removed in connection with the construction of the Kölntriangle development and converted into a pedestrian- and bike-path. 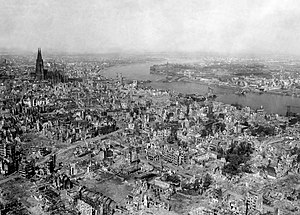 The Hohenzollern Bridge (right) seen at night from the right (east) bank of the Rhine at Deutz.