From Wikipedia
https://en.wikipedia.org/wiki/History_of_display_technology
Aspect of history

Electrically operated display devices have developed from electromechanical systems for display of text, up to all-electronic devices capable of full-motion 3D color graphic displays. Electromagnetic devices, using a solenoid coil to control a visible flag or flap, were the earliest type, and were used for text displays such as stock market prices and arrival/departure display times. The cathode ray tube was the workhorse of text and video display technology for several decades until being displaced by plasma, liquid crystal ( LCD), and solid-state devices such as thin-film transistors (TFTs), LEDs and OLEDs. With the advent of metal-oxide-semiconductor field-effect transistors (MOSFETs), integrated circuit (IC) chips, microprocessors, and microelectronic devices, many more individual picture elements (" pixels") could be incorporated into one display device, allowing graphic displays and video.

One of the earliest electronic displays is the cathode ray tube (CRT), which was first demonstrated in 1897 and made commercial in 1922.[ citation needed] The CRT consists of an electron gun that forms images by firing electrons onto a phosphor-coated screen. The earliest CRTs were monochrome and were used primarily in oscilloscopes and black and white televisions. The first commercial colour CRT was produced in 1954. CRTs were the single most popular display technology used in television sets and computer monitors for over half a century; it was not until the 2000s that LCDs began to gradually replace them.

A derivative of CRTs were storage tubes, which had the ability to retain information displayed on them, unlike standard CRTs which need to be refreshed periodically. In 1968, Tektronix introduced the Direct-View Bistable Storage Tube, which went on to be widely used in oscilloscopes and computer terminals. [1]

1954 Color cathode ray tube for the display of color television: [2]

1968 [1] The Direct-View Bistable Storage Tube CRT retains static information displayed upon it, written using a steerable electron beam that can be turned off. The DVBST was used in vector displays of early computers and in oscilloscopes. 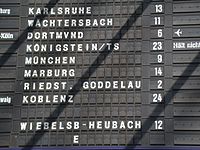 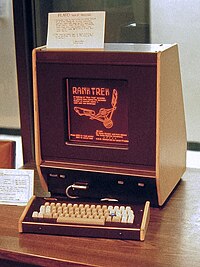 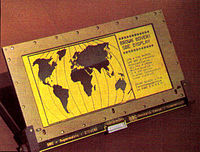 1987 optical micro-electro-mechanical technology that uses a digital micromirror device. While the Digital Light Processing (DLP) imaging device was invented by Texas Instruments, the first DLP-based projector was introduced by Digital Projection Ltd in 1997. 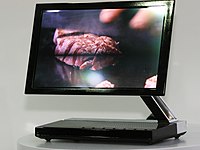 1960s Stroboscopic display: [13] [14] In the 1960s RASA Calculator (Russian), a small motor spins a cylinder that has a number of transparent numerals. To display a numeral, the calculator briefly flashes a thyratron light behind the required number when it spins into position.