"Hark! The Herald Angels Sing" is an English Christmas carol that first appeared in 1739 in the collection Hymns and Sacred Poems. The carol, based on Luke 2:14, tells of an angelic chorus singing praises to God. As it is known in the modern era, it features lyrical contributions from Charles Wesley and George Whitefield, two of the founding ministers of Methodism, with music adapted from " Vaterland, in deinen Gauen" by Felix Mendelssohn.

Wesley, who had written the original version as "Hymn for Christmas-Day," had requested and received slow and solemn music for his lyrics, which has since largely been discarded. Moreover, Wesley's original opening couplet is " Hark! how all the welkin rings / Glory to the King of Kings". [1] The popular version is the result of alterations by various hands, most notably by Whitefield, who changed the opening couplet to the familiar one. In 1840—a hundred years after the publication of Hymns and Sacred Poems—Mendelssohn composed a cantata to commemorate Johann Gutenberg's invention of movable type printing, and it is music from this cantata, adapted by the English musician William H. Cummings to fit the lyrics of "Hark! The Herald Angels Sing", that propels the carol known today. [2] [3] 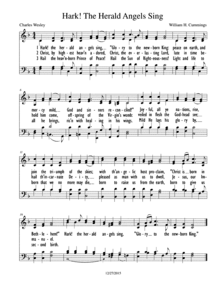 The original hymn text was written as a "Hymn for Christmas-Day" by Charles Wesley, included in the 1739 John Wesley collection Hymns and Sacred Poems. [4] The first stanza (verse) describes the announcement of Jesus' birth. Wesley's original hymn began with the opening line "Hark how all the Welkin rings". This was changed to the familiar "Hark! the Herald Angels sing" by George Whitefield in his 1754 Collection of Hymns for Social Worship. [5] A second change was made in the 1782 publication of the Tate and Brady New Version of the Psalms of David. In this work, Whitefield's adaptation of Wesley's hymn appears, with the repetition of the opening line "Hark! the Herald Angels sing/ Glory to the newborn king" at the end of each stanza, as it is commonly sung today. [6]

In 1855, British musician William Hayman Cummings adapted Felix Mendelssohn's secular music from Festgesang to fit the lyrics of "Hark! The Herald Angels Sing" written by Charles Wesley. [10] Wesley had originally envisioned the song being sung to the same tune as his Easter song " Christ the Lord Is Risen Today". [11]

"Hark! The Herald Angels Sing" was regarded as one of the Great Four Anglican Hymns and published as number 403 in The Church Hymn Book (New York and Chicago, 1872). [12]

In Britain, "Hark! The Herald Angels Sing" has popularly been performed in an arrangement that maintains the basic original William H. Cummings harmonisation of the Mendelssohn tune for the first two verses, but adds a soprano descant and a last verse harmonisation for the organ in verse three by Sir David Willcocks. This arrangement was first published in 1961 by Oxford University Press in the first book of the Carols for Choirs series. For many years it has served as the recessional hymn of the annual Service of Nine Lessons and Carols at King's College Chapel, Cambridge. [13]

An uncommon arrangement of the hymn to the tune "See, the Conqu'ring hero comes" from Handel's Judas Maccabaeus, normally associated with the hymn " Thine Be the Glory", is traditionally [14] used as the recessional hymn of the Festival of Nine Lessons and Carols at St Patrick's Cathedral, Dublin. This is broadcast live each year on Christmas Eve on RTÉ Radio 1. The usual (first) three verses are divided into six verses, each with chorus. The arrangement features a brass fanfare with drums in addition to the cathedral organ, and takes about seven and a half minutes to sing. The Victorian organist W. H. Jude, in his day a popular composer, also composed a new setting of the work, published in his Music and the Higher Life. [15]