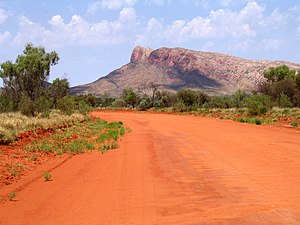 Haasts Bluff, also known as Ikuntji, is an Indigenous Australian community in Central Australia, a region of the Northern Territory. The community is located in the MacDonnell Shire local government area, 227 kilometres (141 mi) west of Alice Springs. At the 2006 census, the community, including outstations, had a population of 207. [1]

The Haasts Bluff community takes its name from the nearby outcrop, given this name in 1872 by the explorer Ernest Giles, after the German-born New Zealand geologist, Julius von Haast. [2]

The locality was established as a Lutheran mission in 1946 and is home to Western Arrernte, Pintupi and Pitjantjatjara people. [3]