From Wikipedia
https://en.wikipedia.org/wiki/Group_7_element
For the group VIIA ( CAS), also referred to as "Group 7", see Halogen.

Group 7, numbered by IUPAC nomenclature, is a group of elements in the periodic table. They are manganese (Mn), technetium (Tc), rhenium (Re), and bohrium (Bh). All known elements of group 7 are transition metals.

Like other groups, the members of this family show patterns in their electron configurations, especially the outermost shells resulting in trends in chemical behavior.

Bohrium has not been isolated in pure form.

Manganese was discovered much earlier than the other Group 7 elements owing to its much larger abundance in nature. While Johan Gottlieb Gahn is credited with the isolation of manganese in 1774, Ignatius Kaim reported his production of manganese in his dissertation in 1771. [1]

Group 7 contains the two naturally occurring transition metals discovered last: technetium and rhenium. Rhenium was discovered when Masataka Ogawa found what he thought was element 43 in thorianite, but this was dismissed; recent studies by H. K. Yoshihara suggest that he discovered rhenium instead, a fact not realized at the time. Walter Noddack, Otto Berg, and Ida Tacke were the first to conclusively identify rhenium; [2] it was thought they discovered element 43 as well, but as the experiment could not be replicated, it was dismissed. Technetium was formally discovered in December 1936 by Carlo Perrier and Emilio Segré, who discovered Technetium-95 and Technetium-97. Bohrium was discovered in 1981 by a team led by Peter Armbruster and Gottfried Münzenburg by bombarding Bismuth-209 with Chromium-54.

Manganese is the only common Group 7 element with the fifth largest abundance in the Earth's crust of any metal. It is most commonly found as manganese dioxide or manganese carbonate. [1] In 2007, 11 million metric tons of manganese were mined.

All other elements are either incredibly rare on earth (technetium, rhenium) or completely synthetic (bohrium). While rhenium is naturally occurring, it is one of the rarest metals with approximately 0.001 parts per million of rhenium in the Earth's crust. [2] In contrast to manganese, only 40 or 50 metric tons of rhenium were mined. Technetium is only found in trace amounts in nature as a product of spontaneous fission; almost all is produced in laboratories. Bohrium is only produced in nuclear reactors and has never been isolated in pure form.

In 2007, 11 million metric tons of manganese were mined.[ citation needed]

Technetium Technetium was created by bombarding molybdenum atoms with deuterons that had been accelerated by a device called a cyclotron. It sometimes can be found in nature but not in large quantity. Rhenium

Bohrium is a synthetic element that does not occur in nature. Very few atoms have been made, but due to its radioactivity, only limited research has been made. 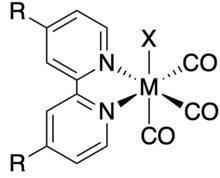 The facial isomer of both rhenium and manganese 2,2'-bipyridyl tricarbonyl halide complexes have been extensively researched as catalysts for electrochemical carbon dioxide reduction due to their high selectivity and stability. They are commonly abbreviated as M(R-bpy)(CO)3X where M = Mn, Re; R-bpy = 4,4'-disubstituted 2,2'-bipyridine; and X = Cl, Br.

The catalytic activity of Re(bpy)(CO)3Cl for carbon dioxide reduction was first studied by Lehn et al. [3] and Meyer et al. [4] in 1984 and 1985, respectively. Re(R-bpy)(CO)3X complexes exclusively produce CO from CO2 reduction with Faradaic efficiencies of close to 100% even in solutions with high concentrations of water or Brønsted acids. [5]

The catalytic mechanism of Re(R-bpy)(CO)3X involves reduction of the complex twice and loss of the X ligand to generate a five-coordinate active species which binds CO2. These complexes will reduce CO2 both with and without an additional acid present; however, the presence of an acid increases catalytic activity. [5] The high selectivity of these complexes to CO2 reduction over the competing hydrogen evolution reaction has been shown by density functional theory studies to be related to the faster kinetics of CO2 binding compared to H+ binding. [6]

Technetium is used in radioimaging.

Bohrium is a synthetic element and is too radioactive to be used in anything.

Although being an essential trace element in the human body, manganese can be somewhat toxic if ingested in higher amounts than normal.[ citation needed] Technetium should be handled with care due to its radioactivity.

Only manganese has a role in the human body. It is an essential trace nutrient, with the body containing approximately 10 milligrams at any given time, being mainly in the liver and kidneys. Many enzymes contain manganese, making it essential for life, and is also found in chloroplasts. Technetium, rhenium, and bohrium have no known biological roles. Technetium is however used in radioimaging.