From Wikipedia
https://en.wikipedia.org/wiki/Great_circle
Intersection of the sphere and a plane which passes through the center point of the sphere
This article is about the mathematical notion. For its applications in geodesy, see great-circle distance. For other uses, see The Great Circle. 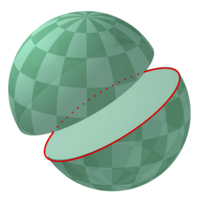 A great circle divides the sphere in two equal hemispheres

To prove that the minor arc of a great circle is the shortest path connecting two points on the surface of a sphere, one can apply calculus of variations to it.

Consider the class of all regular paths from a point

. Introduce spherical coordinates so that

coincides with the north pole. Any curve on the sphere that does not intersect either pole, except possibly at the endpoints, can be parametrized by

to take on arbitrary real values. The infinitesimal arc length in these coordinates is

So the length of a curve

is a functional of the curve given by

According to the Euler–Lagrange equation,

is minimized if and only if

From the first equation of these two, it can be obtained that

Integrating both sides and considering the boundary condition, the real solution of

can be any value between 0 and

, indicating that the curve must lie on a meridian of the sphere. In Cartesian coordinates, this is

which is a plane through the origin, i.e., the center of the sphere.

Some examples of great circles on the celestial sphere include the celestial horizon, the celestial equator, and the ecliptic. Great circles are also used as rather accurate approximations of geodesics on the Earth's surface for air or sea navigation (although it is not a perfect sphere), as well as on spheroidal celestial bodies.

The Funk transform integrates a function along all great circles of the sphere.