From Wikipedia
https://en.wikipedia.org/wiki/Granule_cell
Type of neuron with a very small cell body
Not to be confused with granular cells in the kidney, or granulocytes. 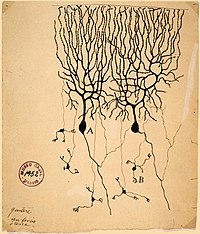 The name granule cell has been used for a number of different types of neuron whose only common feature is that they all have very small cell bodies. Granule cells are found within the granular layer of the cerebellum, the dentate gyrus of the hippocampus, the superficial layer of the dorsal cochlear nucleus, the olfactory bulb, and the cerebral cortex.

Cerebellar granule cells account for the majority of neurons in the human brain. [1] These granule cells receive excitatory input from mossy fibers originating from pontine nuclei. Cerebellar granule cells project up through the Purkinje layer into the molecular layer where they branch out into parallel fibers that spread through Purkinje cell dendritic arbors. These parallel fibers form thousands of excitatory granule-cell–Purkinje-cell synapses onto the intermediate and distal dendrites of Purkinje cells using glutamate as a neurotransmitter.

Dendrites: Each granule cell has 3 – 4 stubby dendrites which end in a claw. Each of the dendrites are only about 15 μm in length.

Soma: Granule cells all have a small soma diameter of approximately 10 μm.

The existence of gap junctions between granule cells allows multiple neurons to be coupled to one another allowing multiple cells to act in synchrony and to allow signalling functions necessary for granule cell development to occur. [2]

The granule cells, produced by the rhombic lip, are found in the granule cell layer of the cerebellar cortex. They are small and numerous. They are characterized by a very small soma and several short dendrites which terminate with claw-shaped endings. In the transmission electron microscope, these cells are characterized by a darkly stained nucleus surrounded by a thin rim of cytoplasm. The axon ascends into the molecular layer where it splits to form parallel fibers. [1]

The granule cell has a characteristic cone-shaped tree of spiny apical dendrites. The dendrite branches project throughout the entire molecular layer and the furthest tips of the dendritic tree end just at the hippocampal fissure or at the ventricular surface. [4] The granule cells are tightly packed in the granular cell layer of the dentate gyrus.

The main intrinsic granule cell in the vertebrate olfactory bulb lacks an axon (as does the accessory neuron). Each cell gives rise to short central dendrites and a single long apical dendrite that expands into the granule cell layer and enters the mitral cell body layer. The dendrite branches terminate within the outer plexiform layer among the dendrites in the olfactory tract. [7] In the mammalian olfactory bulb, granule cells can process both synaptic input and output due to the presence of large spines. [8]

Neural pathways and circuits of the cerebellum

This connection is excitatory as glutamate is released.

Plasticity of the synapse between a parallel fiber and a Purkinje cell is believed to be important for motor learning. [11] The function of cerebellar circuits is entirely dependent on processes carried out by the granular layer. Therefore, the function of granule cells determines the cerebellar function as a whole. [12]

Mossy fiber input codes are conserved during synaptic transmission between granule cells, suggesting that innervation is specific to the input that is received. [14] Granule cells do not just relay signals from mossy fibers, rather they perform various, intricate transformations which are required in the spatiotemporal domain. [10]

Different patterns of mossy fiber input will produce unique patterns of activity in granule cells that can be modified by a teaching signal conveyed by the climbing fiber input. David Marr and James Albus suggested that the cerebellum operates as an adaptive filter, altering motor behaviour based on the nature of the sensory input.

Since multiple (~200,000) granule cells synapse onto a single Purkinje cell, the effects of each parallel fiber can be altered in response to a “teacher signal” from the climbing fiber input.

David Marr suggested that the granule cells encode combinations of mossy fiber inputs. In order for the granule cell to respond, it needs to receive active inputs from multiple mossy fibers. The combination of multiple inputs results in the cerebellum being able to make more precise distinctions between input patterns than a single mossy fiber would allow. [16] The cerebellar granule cells also play a role in orchestrating the tonic conductances which control sleep in conjunction with the ambient levels of GABA which are found in the brain.

Pyramidal cells from the primary auditory cortex project directly on to the cochlear nucleus. This is important in the acoustic startle reflex, in which the pyramidal cells modulate the secondary orientation reflex and the granule cell input is responsible for appropriate orientation. [20] This is because the signals received by the granule cells contain information about the head position. Granule cells in the dorsal cochlear nucleus play a role in the perception and response to sounds in our environment.

Calcium dynamics are essential for several functions of granule cells such as changing membrane potential, synaptic plasticity, apoptosis, and regulation of gene transcription. [10] The nature of the calcium signals that control the presynaptic and postsynaptic function of the olfactory bulb granule cells spines is mostly unknown. [8]

Both epilepsy and depression show a disrupted production of adult-born hippocampal granule cells. [25] Epilepsy is associated with increased production - but aberrant integration - of new cells early in the disease and decreased production late in the disease. [25] Aberrant integration of adult-generated cells during the development of epilepsy may impair the ability of the dentate gyrus to prevent excess excitatory activity from reaching hippocampal pyramidal cells, thereby promoting seizures. [25] Long-lasting epileptic seizure stimulate dentate granule cell neurogenesis. These newly born dentate granule cells may result in aberrant connections that result in the hippocampal network plasticity associated with epileptogenesis. [26]