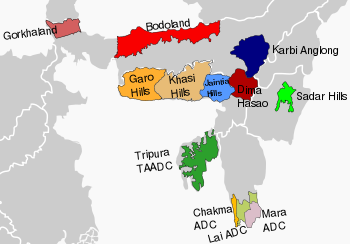 Gorkhaland is the name of the proposed state in India that the Nepali-speaking Gorkha ethnic group in the district of Darjeeling and Kalimpong and the Dooars in northern region of West Bengal have expressed a desire to create. A demand for a separate administrative unit in Darjeeling has existed since 1909, when the Hillmen's Association of Darjeeling submitted a memorandum to Minto-Morley Reforms demanding a separate administrative setup. The term Gorkhaland was coined by Subhash Ghisingh, leader of Gorkha National Liberation Front, who led a violent agitation for its formation in the 1980s. [4] This movement culminated with the formation of Darjeeling Gorkha Hill Council (DGHC) in 1988. The DGHC did not fulfill its goal of forming a new state, which led to the downfall of Subhash Ghisingh [5] and the rise of another party Gorkha Janmukti Morcha (GJM) headed by Bimal Gurung in 2007, which launched a second agitation for a Gorkhaland state. [6]

After three years of agitation for a state of Gorkhaland led by GJM, the GJM reached an agreement with the state government to form a semi-autonomous body to administer the Darjeeling hills. [7] A bill for the creation of GTA was passed in the West Bengal Legislative Assembly on 2 September 2011. [8] The GTA aimed to have administrative, executive and financial powers but no legislative powers. A 10-member joint verification committee headed by a retired High Court judge examined the demand to bring the Gorkha-inhabited pockets of the Dooars and the Terai under the GTA. [9]

On 29 October 2011, the Gorkha Janmukti Morcha and the Akhil Bharatiya Adivasi Vikas Parishad (ABAVP), Dooars Unit signed an 18-point agreement at Mongpoo, after which these organizations jointly proposed a new administrative body called the Gorkhaland and Adivasi Territorial Administration (GATA) in place of the GTA. [13] The ABAVP decided to agree to incorporate 196 mouzas of the Dooars and 199 mouzas of the Terai region into the proposed GATA. [14]

The President of India Pratibha Patil gave her assent to the GTA Bill of West Bengal on 7 March 2012. [15] The West Bengal government issued a gazette notification for the GTA Act on 14 March 2012, signalling preparations for elections for the GTA. [16] In a meeting held on 24 March 2012 between GJM leaders and the West Bengal government, it was decided that the election to the GTA would be held in the end of June or in July 2012. [17] The Justice Sen Committee would be requested to submit its report on the inclusion of additional areas of Terai and Dooars in the GTA by early June 2012. [18] The WB government released a list of 45 constituencies of the GTA on 26 May 2012 to which elections are to be held in July 2012. [19] The high-powered committee headed by retired judge Shyamal Kumar Sen that was set up by the West Bengal government recommended inclusion of just five mouzas under the proposed GTA although the Gorkha Janmukti Morcha had demanded 398 mouzas from the Dooars and Terai regions. [20] The West Bengal government announced that it would set up a three-member "Fact Verification Committee" to go into the recommendations of Justice Sen Committee after the Gorkha Janmukti Morcha rejected its report. [21] The Calcutta High Court admitted on 19 June 2012 the case moved by Gorkha National Liberation Front leader Subhash Ghisingh challenging the legality of the GTA. Justice Dipankar Dutta told the three signatories to the GTA agreement – the central government, the state government and the Gorkha Janmukti Morcha – to file affidavits stating their stand on Ghisingh's contention. [22]

The West Bengal government announced that the election for the GTA would be held on 29 July 2012. [23] The Gorkha Janmukti Morcha announced that it would contest the GTA polls, which it had earlier threatened to boycott over the Justice Sen-headed committee recommendations on territorial inclusion of the Dooars and Terai that it had rejected. [24] After a period of silence, the Gorkha Janmukti Morcha announced the names of its GTA election nominees. [25] [26] Parties that formed the Gorkhaland Task Force ( CPRM, ABGL, GNLF(C), Gorkhaland Rajya Nirman Morcha and others) decided not contest the GTA elections. [27] Both CPI(M) and Trinamool Congress fielded candidates in the election. [28] The GNLF decided to boycott the elections and its chairman filed a case in the Kolkata High Court challenging the GTA. [29] The CPI(M) withdrew the nominations of all its 13 candidates from the GTA elections, alleging threats and intimidation by the GJM [30] and the GJM received 28 seats of the GTA uncontested. [31] In the elections of the remaining 17 seats of the GTA held on 29 July 2012, GJM candidates won from all the constituencies. [32] Sanchabir Subba, the rebel Gorkha Janmukti Morcha candidate from Gitdabling-Nimbong, narrowly lost to the party's official contestant Kalyan Dewan by 677 votes. [33] The newly elected members of the GTA were sworn in on 4 August 2012 at Darjeeling in the presence of home minister Sushilkumar Shinde and Chief Minister of West Bengal Mamata Banerjee. [34]