From Wikipedia
https://en.wikipedia.org/wiki/Golden_age_(metaphor)
A period in a field of endeavor when great tasks were accomplished
For the mythological meaning, see Golden Age. For other uses, see Golden Age (disambiguation).

A golden age is a period in a field of endeavor when great tasks were accomplished. The term originated from early Greek and Roman poets, who used it to refer to a time when mankind lived in a better time and was pure (see Golden Age).

The ancient Greek philosopher Hesiod introduced the term in his Works and Days, when referring to the period when the "Golden Race" of man lived. This was part of fivefold division of Ages of Man, starting with the Golden age, then the Silver Age, the Bronze Age, the Age of Heroes (including the Trojan War), and finally, the current Iron Age. [1] The concept was further refined by Ovid, in his Metamorphoses, into the four "metal ages" (golden, silver, bronze, and iron). [2]

The Golden age in Classic literature 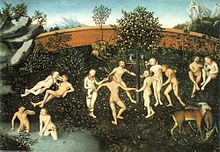 The Golden Age by Lucas Cranach the Elder, 1530 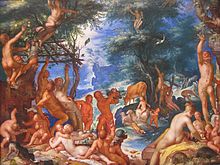 The Golden Age by Joachim Wtewael, 1605

The Golden age as described by Hesiod was an age where all humans were created directly by the Olympian gods. They did not have women in their ranks, and could not reproduce. They lived long lives in peace and harmony, and were oblivious of death. The "Golden race" were however mortals, but would die peacefully and in their sleep unmarked by sickness and age. [1] Ovid emphasizes the justice and peace that defined the Golden Age. He described it as a time before man learned the art of navigation, and as a pre-agricultural society. [3] The idea of a Golden age lingered in literature and historical understanding throughout the Greek and Roman periods. [4] It was partly replaced by the Christian Six Ages of the World based on the biblical chronology in the early Middle Ages. [5]

Evolution from period to metaphor

The term "Golden age" has always had a metaphoric element. A few centuries after Hesiod, Plato pointed out that the "Golden race" were not made from gold as such, but that the term should be understood metaphorically. [6] The classical idea of the "metal ages" as actual historical periods held sway throughout the Greek and Roman periods. [4] While supplemented by St. Augustine's " Six Ages of the World", the classical ideas were never entirely eradicated, and it resurfaced to form the basis of division of time in early archaeology. [5]

At the birth of modern archaeology in the 18th century, the "Golden age" was associated with a pre-agricultural society. However, already in the 16th century, the term "Golden age" was replaced by " Stone Age" in the three-age system. [7] [8] Still, Rousseau used the term for a loosely defined historical period characterized by the " State of nature" as late as the during the late 18th century. [9] While the concept of an Iron and Bronze Age are still used by historians and archaeologists, the "Golden age" of Hesiod was a purely mythical period, and has come to signify any period in history where the state of affairs for a specific phenomenon appear to have been on their height, better than in the periods proceeding it and following the "Golden Age". It is sometimes still employed for the hunter-gatherer tribal societies of the Mesolithic, but only as a metaphor. [10]

A society's Golden Age marks that period in its history having a heightened output of art, science, literature, and philosophy.[ citation needed]

Acropolis, rebuilt by Pericles during the Athenian Golden Age

A golden age is often ascribed[ by whom?] to the years immediately following some technological innovation. During this time writers and artists ply their skills in this new medium. Therefore, there are Golden Ages of both radio and television. During such a nascent phase the technology allows new ideas to be expressed, as new art-forms flower quickly into new areas:

At least one technology had its "Golden Age" in its latter years:

A cultural "golden age" can feature in the construction of a national myth. [28]

Technology and creativity spawn new genres in literature and theatre. The onset of a new genre will be its Golden Age:

Companies will use "Golden Age" as a marketing euphemism to replace " senior citizen":