From Wikipedia
https://en.wikipedia.org/wiki/Glen_Canyon_National_Recreation_Area
Protected area in Arizona and Utah 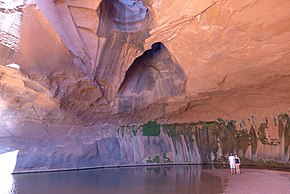 Glen Canyon National Recreation Area (shortened to Glen Canyon NRA or GCNRA) is a national recreation area and conservation unit of the United States National Park Service that encompasses the area around Lake Powell and lower Cataract Canyon in Utah and Arizona, covering 1,254,429 acres (5,076.49 km2) of mostly rugged high desert terrain. The recreation area is named for Glen Canyon, which was flooded by the Glen Canyon Dam, completed in 1966, and is now mostly submerged beneath the waters of Lake Powell.

Glen Canyon NRA was established in 1972 "to provide for public use and enjoyment and to preserve the area's scientific, historic, and scenic features." The stated purpose of Glen Canyon NRA is for recreation as well as preservation (whereas a national park may carry more emphasis on natural preservation). As such, the area has been developed for access to Lake Powell via five marinas, four public campgrounds, two small airports, and numerous houseboat rental concessions. 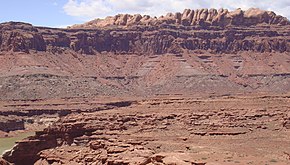 The geology of the area is dominated by the Glen Canyon Group, consisting of the Navajo Sandstone, Kayenta Formation, and Wingate Sandstone. [3] The entire stratigraphic section includes rocks dating from the Cretaceous to Pennsylvanian periods. [4]

Lake Powell has nearly 2,000 miles (3,200 km) of fish-holding shoreline and provides opportunities to fish for largemouth bass, smallmouth bass, and striped bass that swim in the waters of the recreation area.

With millions of visitors to the recreation area each year, it is inevitable that vandals will deface the rock faces of the canyon. Glen Canyon NRA has implemented a voluntourism program wherein volunteers sign up for a five-day houseboat trip during which they help remove graffiti from the canyon walls. [5]