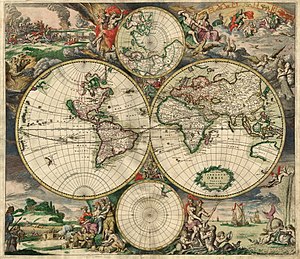 Gerrit Lucasz van Schagen or Schaagen ( Latinised Gerardus a Schagen) (ca. 1642 – c. March 1724 was an engraver and cartographer from Amsterdam, known for his exquisite reproductions of maps, particularly of those by Nicolaes Visscher I and Frederick de Wit. [1] [2] [3] He lived and worked in Amsterdam, on the Haarlemmerdijk near the New Haarlem sluice at the house with the sign "In de Stuurman". [4]

The surname suggests that Gerrit or his father Lucas may have been born in Schagen. On 24 April 1677 he married Gertruij Govers van Schendel/Schijndel. At this occasion he was "from Amsterdam, plaetsnijder (engraver) from profession, 35 years old, and living on the Haarlemmerdijk." [5] After the death of Geertruij in September 1690, [6] Gerrit, as widower of Geertruij and still living on the Haarlemmerdijk, remarried on 7 October 1695 with the 34-year old Anna Cornelis. [5] Gerrit and Anna baptized children between 1697 and 1701 and together were witnesses at other baptisms as late as June 1712. [7] A Gerrit van Schagen was buried 19 March 1724 at the Karthuizer cemetery in Amsterdam. [8]