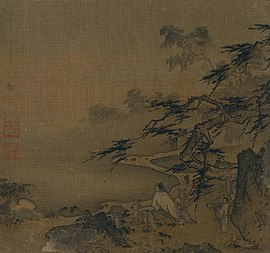 The art of gentleman scholars tended to idealize retreat into the beauties of nature and contemplation, an idea parallel to the travel literature of Su Shi and Yuan Hongdao; painting by Song Dynasty artist Ma Yuan, c. 1200–1230.

The term " landed gentry", or "gentry", originally used for Britain, does not correspond to any single term in Chinese. One standard work remarks that under the Ming dynasty, the elite who held privileged status through passing the Imperial exams were called shenshi 紳士 or jinshen 縉紳. These literati, or scholar-officials, are "loosely known in English as the Chinese gentry". Through education this elite held a virtual monopoly on office holding, and overlapped with an unofficial elite of the wealthy. After the Tang dynasty, the Song Dynasty developed the civil service exam to replace the nine-rank system which favored nobles. Under the Song dynasty, their power and influence eclipsed that of the hereditary and largely military aristocrats. [1] They are also called 士紳 shishen "scholar gentry" or 鄉紳 xiangshen "local gentry". Attempts have been made to define them as a social class who had passed the examinations and so were eligible to hold office, as well as retired mandarins or their families and descendants. Owning land was often their way of preserving wealth. [2]

Under the Confucian class system (the four occupations) the scholar-official was at the top with farmers, artisans, and merchants below them in descending order. Since the next highest class was agricultural, scholar-officials retired to landed estates. They did not work the land themselves but hired peasants as tenant farmers. In this period of Chinese history, peasants were actually of a higher class than the merchants. The sons of these mandarins aspired to pass the imperial exams and continue the family legacy. Members of the gentry were expected to be an example to their community as Confucian gentlemen.

By late imperial China, sons of merchants used their money to buy an education and enter the civil service. Also, financially desperate gentry married into merchant families which led to a breakdown of the old class structure. With the abolition of the exam system and the overthrow of the Qing dynasty came the end of the scholar-official as a legal group.

Mass killings of landlords under Mao

After the New Culture Movement, radicals used the term to criticize land owners as "feudal". Mao Zedong led the way in attacking "bad gentry and local bullies" for demanding and collecting high rent from their tenants during the republican period, and indeed many local landlords organized violent gangs to enforce their rule. The communists were able to rally much of the village population through their promises of agrarian reform and land redistribution. After the People's Republic of China was established, many landlords were executed by class struggle trials and the class as a whole was abolished. Former members were stigmatized and faced persecution which reached its heights during the Cultural Revolution. This persecution ended with the advent of Chinese economic reform under Deng Xiaoping.