Arms of Greville: Sable, on a cross engrailed or five pellets a bordure engrailed of the second

Fulke Greville, 1st Baron Brooke, de jure 13th Baron Latimer and 5th Baron Willoughby de Broke KB PC ( /fʊlk ˈɡrɛvɪl/; 3 October 1554 – 30 September 1628), known before 1621 as Sir Fulke Greville, was an Elizabethan poet, dramatist, and statesman who sat in the House of Commons at various times between 1581 and 1621, when he was raised to the peerage.

Greville was a capable administrator who served the English Crown under Elizabeth I and James I as, successively, treasurer of the navy, chancellor of the exchequer, and commissioner of the Treasury, and who for his services was in 1621 made Baron Brooke, peer of the realm. Greville was granted Warwick Castle in 1604, making numerous improvements. Greville is best known today as the biographer of Sir Philip Sidney, and for his sober poetry, which presents dark, thoughtful and distinctly Calvinist views on art, literature, beauty and other philosophical matters.

Sir Henry Sidney, Philip's father, and president of the Council of Wales and the Marches, gave Greville in 1576 a post connected with the court of the Welsh Marches, but Greville resigned it in 1577 to go to attend court of Queen Elizabeth I along with Philip Sidney. There, Greville became a great favourite with the Queen, who valued his sober character and administrative skills. In 1581, he was elected in a by-election as Member of Parliament for Southampton. [5] Queen Elizabeth made him secretary to the principality of Wales in 1583. However he was put out of favour more than once for leaving the country against her wishes. 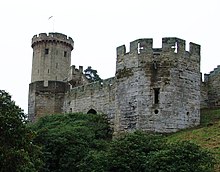 In 1581 at a Whitehall tournament in honour of French ambassadors Greville, Philip Sidney, Philip Howard Earl of Arundel and Frederick Lord Windsor staged an entertainment as the "Four Foster Children of Desire". The ambassadors were working on plans for Elizabeth's marriage to Francis, Duke of Anjou. The "Foster Children" laid siege to the "Fortress of Perfect Beautie". After two days of challenges the Children admitted defeat. The entertainment was understood to convey the idea that Elizabeth was unattainable, devised by the opposition to the French marriage. [6]

Greville, Philip Sidney and Sir Edward Dyer were members of the " Areopagus", the literary clique which, under the leadership of Gabriel Harvey, supported the introduction of classical metres into English verse. Sidney and Greville arranged to sail with Sir Francis Drake in 1585 in his expedition against the Spanish West Indies, but Elizabeth forbade Drake to take them with him, and also refused Greville's request to be allowed to join Robert Dudley's army in the Netherlands. Philip Sidney, who took part in the campaign, was killed on 17 October 1586. Greville memorialized his beloved friend in A Dedication to Sir Philip Sidney.

Greville participated in the Battle of Coutras in 1587. [7] About 1591 Greville served further for a short time in Normandy under King Henry III of Navarre in the French Wars of Religion. This was his last experience of war.

Greville was granted Warwick Castle—situated on a bend of the River Avon in Warwickshire—by King James I in 1604. [8] The castle was in a dilapidated condition when he took possession of it, and he spent £20,000 to restore it to former glory. [5] [9]

In 1614 he became chancellor and under-treasurer of the exchequer, and throughout the reign he was a valued supporter of James I, although in 1615 he advocated the summoning of Parliament. In 1618 he became commissioner of the treasury, and in 1621 he was raised to the peerage with the title of Baron Brooke, a title which had belonged to the family of his paternal grandmother.

In 1628 Greville was stabbed at his house in Holborn, London by Ralph Haywood, a servant who believed that he had been cheated by being left out of his master's will. Haywood then turned the knife on himself. Greville's physicians treated his wounds by filling them with pig fat. Rather than disinfecting them, the pig fat turned rancid and infected the wounds, and he died in agony four weeks after the attack. [10] His body was brought back to Warwick, and he was buried in the Collegiate Church of St Mary, Warwick, and on his tomb was inscribed the epitaph he had composed:

Greville has numerous streets named after him in the Hatton Garden area of Holborn, London (see Hatton Garden#Street names etymologies).

A line from Chorus Sacerdotum from Mustapha is quoted by Christopher Hitchens in his book Letters to a Young Contrarian. [12]

In 2018 the first ever festival dedicated to Greville was launched in his home town, Alcester, Warwickshire. [13]

Greville is best known by his biography of Sidney (composed c. 1610–12), which circulated in manuscript with the title A Dedication to Sir Philip Sidney. It was published in 1652 as The Life of the Renowned Sir Philip Sidney. [n 1] He includes some autobiographical matter in what amounts to a treatise on government.

Greville's poetry consists of closet tragedies, sonnets, and poems on political and moral subjects. His style is grave and sententious.

The principal repository for Fulke Greville's papers is the British Library (Additional MSS 54566-71, the Warwick Manuscripts; letters in the as-yet uncatalogued Earl Cowper mss.). Individual manuscripts of the Dedication to Sir Philip Sidney are to be found at the Bodleian Library, Oxford (a manuscript formerly owned by Dr. B. E. Juel-Jensen); Trinity College, Cambridge (MSS R.7.32 and 33); and the Shrewsbury Library (MS 295).

Charles Lamb commented on Greville: "He is nine parts Machiavel and Tacitus, for one of Sophocles and Seneca... Whether we look into his plays or his most passionate love-poems, we shall find all frozen and made rigid with intellect." [14] He goes on to speak of the obscurity of expression that runs through all Greville's poetry.

Andrea McCrea sees the influence of Justus Lipsius in the Letter to an Honourable Lady, but elsewhere detects a scepticism more akin to Michel de Montaigne. [15]

A rhyming elegy on Greville, published in Henry Huth's Inedited Poetical Miscellanies, brings charges of miserliness against him.

Robert Pinsky has asserted that this work is comparable in force of imagination to John Donne. [16]

Lord Brooke, who never married, left no natural heirs, and his senior (Brooke) barony passed to his cousin and adopted son, Robert Greville (1608–1643), who took the side of Parliament in the English Civil War, and defeated the Royalists in a skirmish at Kineton in August 1642. Robert was killed during the siege of Lichfield on 2 March 1643, having survived the elder Greville by only fifteen years. His other barony (Willoughby de Broke) was inherited by his sister Margaret who married Sir Richard Verney.