From Wikipedia
https://en.wikipedia.org/wiki/Food_technology
This article is about branch of food science. For the monthly food science and technology magazine, see Food Technology (magazine).

Bakery at the Faculty of Food Technology, Latvia University of Life Sciences and Technologies 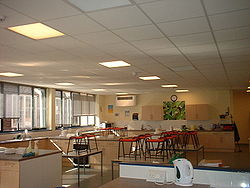 The food technology room at Marling School in Stroud, Gloucestershire

Food technology is a branch of food science that deals with the production, preservation, quality control and research and development of the food products.

Early scientific research into food technology concentrated on food preservation. Nicolas Appert’s development in 1810 of the canning process was a decisive event. The process wasn't called canning then and Appert did not really know the principle on which his process worked, but canning has had a major impact on food preservation techniques.

Louis Pasteur's research on the spoilage of wine and his description of how to avoid spoilage in 1864 was an early attempt to apply scientific knowledge to food handling. Besides research into wine spoilage, Pasteur researched the production of alcohol, vinegar, wines and beer, and the souring of milk. He developed pasteurization—the process of heating milk and milk products to destroy food spoilage and disease-producing organisms. In his research into food technology, Pasteur became the pioneer into bacteriology and of modern preventive medicine.

Developments in food technology have contributed greatly to the food supply and have changed our world. Some of these developments are:

Acceptance of the different food technologies varies. While pasteurization is well recognized and accepted, high pressure treatment and even microwaves often are perceived as risky. Studies by the Hightech Europe project found that traditional technologies were well accepted in contrast to innovative technologies. [2]

Consumers form their attitude towards innovative food technologies through three main mechanisms: First, through knowledge or beliefs about risks and benefits correlated with the technology; second, through attitudes based on their own experience; and third, through application of higher order values and beliefs. [3] A number of scholars consider the risk-benefit trade-off as one of the main determinants of consumer acceptance, [4] although some researchers place more emphasis on the role of benefit perception (rather than risk) in consumer acceptance. [5]

Acceptance of innovative technologies can be improved by providing non-emotional and concise information about these new technological processes methods. The HighTech project also suggests that written information has a higher impact on consumers than audio-visual information. [7]