From Wikipedia
https://en.wikipedia.org/wiki/Folk_art
This article is about tangible folk art objects. For performance folk arts, see Folk arts. For the album by Joe Lovano, see Folk Art (album).
art produced from an indigenous culture or by peasants or other laboring tradespeople 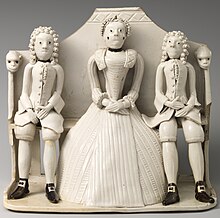 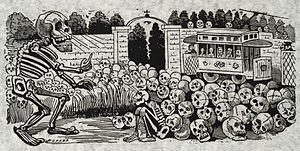 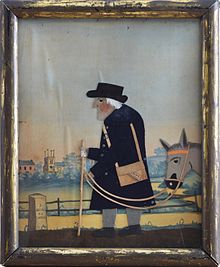 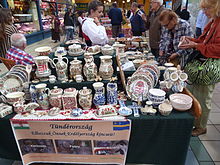 Traditional styles of faience pottery from Székely Land, Romania, on sale in Budapest in 2014. A conventional idea of folk art, though no doubt made in quasi-industrial conditions.

Folk art covers all forms of visual art made in the context of folk culture. Definitions vary, but generally the objects have practical utility of some kind, rather than being exclusively decorative. The makers of folk art are typically trained within a popular tradition, rather than in the fine art tradition of the culture. There is often overlap, or contested ground [1] with 'naive art'. "Folk art" is not used in regard to traditional societies where ethnographic art continue to be made.

The types of objects covered by the term "folk art" vary. The art form is categorised as "divergent... of cultural production ... comprehended by its usage in Europe, where the term originated, and in the United States, where it developed for the most part along very different lines." [2] 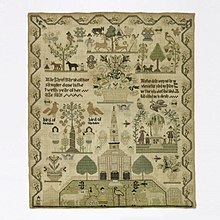 Folk arts reflect the cultural life of a community. The art form encompasses the expressive culture associated with the fields of folklore and cultural heritage. Tangible folk art can include objects which historically are crafted and used within a traditional community. Intangible folk arts can include such forms as music, dance and narrative structures. Each of these art forms, both tangible and intangible, typically were developed to address a practical purpose. Once the purpose has been lost or forgotten, there usually is no reason for further transmission unless the object or action has been imbued with meaning beyond its initial practicality. These artistic traditions are shaped by values and standards that are passed from generation to generation, most often within family and community, through demonstration, conversation, and practice.

Objects of folk art are a subset of material culture and include objects which are experienced through the senses, by seeing and touching. Typical for material culture in art, these tangible objects can be handled, repeatedly re-experienced, and sometimes broken. They are considered works of art because of the technical execution of an existing form and design; the skill might be seen in the precision of the form, the surface decoration or in the beauty of the finished product. [3] As a folk art, these objects share several characteristics that distinguish them from other artifacts of material culture.

The object is created by a single artisan or team of artisans. The craft-person works within an established cultural framework. The folk art has a recognizable style and method in crafting its pieces, which allows products to be recognized and attributed to a single individual or workshop. This was originally articulated by Alois Riegl in his study of Volkskunst, Hausfleiss, und Hausindustrie, published in 1894. "Riegl ... stressed that the individual hand and intentions of the artist were significant, even in folk creativity. To be sure, the artist may have been obliged by group expectations to work within the norms of transmitted forms and conventions, but individual creativity – which implied personal aesthetic choices and technical virtuosity – saved received or inherited traditions from stagnating and permitted them to be renewed in each generation." [4] Individual innovation in the production process plays an important role in the continuance of these traditional forms. Many folk art traditions like quilting, ornamental picture framing, and decoy carving continue to be practiced, and new forms continue to emerge.

Contemporary outsider artists are often self-taught, and their work is usually developed in isolation or in small communities across the country. The Smithsonian American Art Museum houses over 70 folk and self-taught artists; for example, Elito Circa, a famous and internationally recognized artist of Indigenouism, developed his own styles without professional training or guidance. [5]

The taka is a type of paper mache art native to Paete in the Philippines.

Folk art objects are usually produced in a one-off production process. Only one object is made at a time, either by hand or in a combination of hand and machine methods, and are not mass-produced. As a result of manual production, individual pieces are considered to be unique and usually can be differentiated from other objects of the same type. In his essay on "Folk Objects", folklorist Simon Bronner references preindustrial modes of production, but folk art objects continue to be made as unique crafted pieces by folk artisans. "The notion of folk objects tends to emphasize the handmade over machine manufactured. Folk objects imply a mode of production common to preindustrial communal society where knowledge and skills were personal and traditional." [6] Folk art does not need to be old; it continues to be hand-crafted today in many regions around the world.

The design and production of folk art is learned and taught informally or formally; folk artists are not self-taught.[ citation needed] Folk art does not aim for individualistic expression. Instead, "the concept of group art implies, indeed requires, that artists acquire their abilities, both manual and intellectual, at least in part from communication with others. The community has something, usually a great deal, to say about what passes for acceptable folk art." [7] Historically, the training in a handicraft was done as apprenticeships with local craftsmen, such as the blacksmith or the stonemason. As the equipment and tools needed were no longer readily available in the community, these traditional crafts moved into technical schools or applied arts schools.

Owned by the community

The object is recognizable within its cultural framework as being of a known type. Similar objects can be found in the environment made by other individuals which resemble this object. Individual pieces of folk art will reference other works in the culture, even as they show exceptional individual execution in form or design. If antecedents cannot be found for this object, it might still be a piece of art but it is not folk art. "While traditional society does not erase ego, it does focus and direct the choices that an individual can acceptably make… the well-socialized person will find the limits are not inhibiting but helpful… Where traditions are healthy the works of different artists are more similar than they are different; they are more uniform than personal." [8] Tradition in folk art emerges through the passing of information from one generation to another. Through generations of family lines, family members pass down the knowledge, information, skills and tools needed to continue the creation of one’s folk art. Examples are Leon “Peck” Clark, a Mississippi basket maker, who learned his skills from a community member; George Lopez of Cordova, New Mexico, who is a sixth-generation santos carver who’s children also carve; and the Yorok-Karok basket weavers, who explain that relatives generally taught them to weave.” [9]

Utility of the object

The known type of the object must be, or have originally been, utilitarian; it was created to serve some function in the daily life of the household or the community. This is the reason the design continues to be made. Since the form itself had function and purpose, it was duplicated over time in various locations by different individuals. A book on the history of art states that "every man-made thing arises from a problem as a purposeful solution." [10] Written by George Kubler and published in 1962, " The Shape of Time: Remarks on the History of Things" describes an approach to historical change which places the history of objects and images in a larger continuum of time. The purpose of folk art is not purely decorative or aimed to have duplicated handicraft. However, since the form itself was a distinct type with its function and purpose, folk art has continued to be copied over time by different individuals.

Aesthetics of the genre 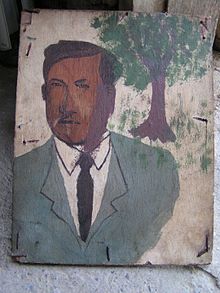 The object is recognized as being exceptional in the form and decorative motifs. Being part of the community, the craftsperson is reflecting on the community's cultural aesthetics, and may take into consideration the community's response to the handicraft. An object can be created to match the community's expectations, and the artist may design the product with unspoken cultural biases to reflect this aim. [11] While the shared form indicates a shared culture, innovation can enable the individual artisan to embody their own vision. This can be a representation of manipulating collective and individual culture, within the traditional folk art production. "For art to progress, its unity must be dismantled so that certain of its aspects can be freed for exploration, while others shrink from attention." [12] This dichotomous representation of the culture is typically visible in the final product. [13]

Folk art is designed in different shapes, sizes and forms. It traditionally uses the materials which are at hand in the locality and reproduces familiar shapes and forms. The Smithsonian Center for Folklife and Cultural Heritage has compiled a page of storied objects that have been part of one of their annual folklife festivals. The list below includes a sampling of different materials, forms, and artisans involved in the production of everyday and folk art objects. [14]

Listed below are a wide-ranging assortment of labels for an eclectic group of art works. All of these genres are created outside of the institutional structures of the art world, and are not considered "fine art". There is overlap between these labeled collections, such that an object might be listed under two or more labels. [2] Many of these groupings and individual objects might also resemble "folk art" in its aspects, however may not align to the defining characteristics outlined above.

In 1951, artist, writer and curator Barbara Jones organised the exhibition Black Eyes and Lemonade at the Whitechapel Gallery in London as part of the Festival of Britain. This exhibition, along with her publication The Unsophisticated Arts, exhibited folk and mass-produced consumer objects alongside contemporary art in an early instance of the popularisation of pop art in Britain. [17]

The United Nations recognizes and supports cultural heritage around the world, [18] in particular UNESCO in partnership with the International Organization of Folk Art (IOV). Their declared mission is to “further folk art, customs and culture around the world through the organization of festivals and other cultural events, … with emphasis on dancing, folk music, folk songs and folk art.” [19] By supporting international exchanges of folk art groups as well as the organization of festivals and other cultural events, their goal is promote international understanding and world peace.

In the United States, the National Endowment for the Arts works to promote greater understanding and sustainability of cultural heritage across the United States and around the world through research, education, and community engagement. As part of this, they identify and support NEA folk art fellows in quilting, ironwork, woodcarving, pottery, embroidery, basketry, weaving, along with other related traditional arts. The NEA guidelines define as criteria for this award a display of “authenticity, excellence, and significance within a particular tradition” for the artists selected. (NEA guidelines) .” In 1966, the NEA’s first year of funding, support for national and regional folk festivals was identified as a priority with the first grant made in 1967 to the National Folk Festival Association. Folklife festivals are celebrated around the world to encourage and support the education and community engagement of diverse ethnic communities.