From Wikipedia
This is the latest accepted revision, reviewed on 20 July 2021.
https://en.wikipedia.org/wiki/Flowchart
Diagram that represents a workflow or process
"Flow chart" redirects here. For the poem, see Flow Chart (poem). For the music group, see Flowchart (band). 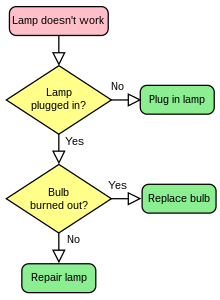 A simple flowchart representing a process for dealing with a non-functioning lamp.

A flowchart is a type of diagram that represents a workflow or process. A flowchart can also be defined as a diagrammatic representation of an algorithm, a step-by-step approach to solving a task.

The flowchart shows the steps as boxes of various kinds, and their order by connecting the boxes with arrows. This diagrammatic representation illustrates a solution model to a given problem. Flowcharts are used in analyzing, designing, documenting or managing a process or program in various fields. [1]

Flowchart of a C-style for loop

Flowcharts are used in designing and documenting simple processes or programs. Like other types of diagrams, they help visualize what is going on and thereby help understand a process, and perhaps also find less-obvious features within the process, like flaws and bottlenecks. There are different types of flowcharts: each type has its own set of boxes and notations. The two most common types of boxes in a flowchart are:

Flowcharts depict certain aspects of processes and are usually complemented by other types of diagram. For instance, Kaoru Ishikawa defined the flowchart as one of the seven basic tools of quality control, next to the histogram, Pareto chart, check sheet, control chart, cause-and-effect diagram, and the scatter diagram. Similarly, in UML, a standard concept-modeling notation used in software development, the activity diagram, which is a type of flowchart, is just one of many different diagram types.

Nassi-Shneiderman diagrams and Drakon-charts are an alternative notation for process flow.

The underlying graph structure of a flowchart is a flow graph, which abstracts away node types, their contents and other ancillary information.

The first structured method for documenting process flow, the " flow process chart", was introduced by Frank and Lillian Gilbreth in the presentation "Process Charts: First Steps in Finding the One Best Way to do Work", to members of the American Society of Mechanical Engineers (ASME) in 1921. [2] The Gilbreths' tools quickly found their way into industrial engineering curricula. In the early 1930s, an industrial engineer, Allan H. Mogensen began to train business people in the use of some of the tools of industrial engineering at his Work Simplification Conferences in Lake Placid, New York.

Art Spinanger, a 1944 graduate of Mogensen's class, took the tools back to Procter and Gamble where he developed their Deliberate Methods Change Program. Ben S. Graham, another 1944 graduate, Director of Formcraft Engineering at Standard Register Industrial, applied the flow process chart to information processing with his development of the multi-flow process chart, to present multiple documents and their relationships. [3] In 1947, ASME adopted a symbol set derived from Gilbreth's original work as the "ASME Standard: Operation and Flow Process Charts." [4]

Douglas Hartree in 1949 explained that Herman Goldstine and John von Neumann had developed a flowchart (originally, diagram) to plan computer programs. [5] His contemporary account was endorsed by IBM engineers [6] and by Goldstine's personal recollections. [7] The original programming flowcharts of Goldstine and von Neumann can be found in their unpublished report, "Planning and coding of problems for an electronic computing instrument, Part II, Volume 1" (1947), which is reproduced in von Neumann's collected works. [8]

The flowchart became a popular tool for describing computer algorithms, but its popularity decreased in the 1970s, when interactive computer terminals and third-generation programming languages became common tools for computer programming, since algorithms can be expressed more concisely as source code in such languages. Often pseudo-code is used, which uses the common idioms of such languages without strictly adhering to the details of a particular one.

Nowadays flowcharts are still used for describing computer algorithms. [9] Modern techniques such as UML activity diagrams and Drakon-charts can be considered to be extensions of the flowchart.

Sterneckert (2003) suggested that flowcharts can be modeled from the perspective of different user groups (such as managers, system analysts and clerks), and that there are four general types: [10]

Notice that every type of flowchart focuses on some kind of control, rather than on the particular flow itself. [10]

In addition, many diagram techniques are similar to flowcharts but carry a different name, such as UML activity diagrams.

The American National Standards Institute (ANSI) set standards for flowcharts and their symbols in the 1960s. [14] The International Organization for Standardization (ISO) adopted the ANSI symbols in 1970. [15] The current standard, ISO 5807, was revised in 1985. [16] Generally, flowcharts flow from top to bottom and left to right. [17]

The ANSI/ISO standards include symbols beyond the basic shapes. Some are: [17] [18]

For parallel and concurrent processing the Parallel Mode horizontal lines [19] or a horizontal bar [20] indicate the start or end of a section of processes that can be done independently: 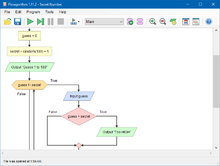 Any drawing program can be used to create flowchart diagrams, but these will have no underlying data model to share data with databases or other programs such as project management systems or spreadsheet. Many software packages exist that can create flowcharts automatically, either directly from a programming language source code, or from a flowchart description language.

There are several applications and visual programming languages [21] that use flowcharts to represent and execute programs. Generally these are used as teaching tools for beginner students. Examples include Flowgorithm, Raptor, LARP, Visual Logic, Fischertechnik ROBO Pro, and VisiRule.